If you had dinner with Barack and Michelle Obama, what would the topic of conversation be? For John Legend and Chrissy Teigen, their recent discussions with the former president and first lady in Oakland, CA, varied, from basketball talk to revealing obscure crushes. During a visit to The Tonight Show Starring Jimmy Fallon, John told Jimmy what went down when Chrissy shared her Secret Service agent fascination with Barack and Michelle.

"She said if she didn't marry me, she would've married a guy in Secret Service," John explained. "She's very into this whole Secret Service . . . the aura around them."

Turns out Michelle has noticed a commonality among the spouses of Secret Service agents. Watch the video above to see what John and Chrissy learned from the former first lady — plus, find out what John predicted about his future when he was only 15 years old. 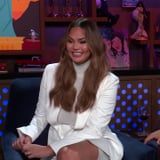 Annie Murphy
Yep, Annie Murphy Can Still Slip Into Character as Alexis Rose at the Drop of a Hat
by Victoria Messina 6 days ago