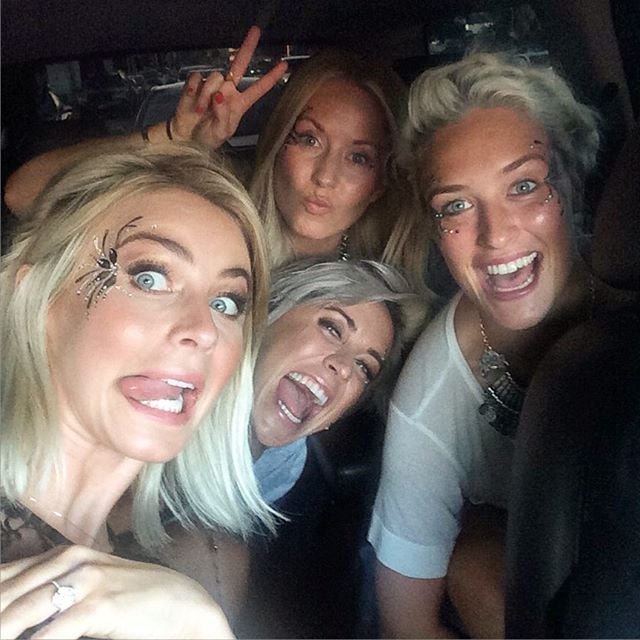 Julianne Hough finally gave the world a peek at her gorgeous engagement ring during a fun girls' night out in LA on Wednesday. In a cute photo posted by hairstylist Riawna Capri, The Dancing With the Stars judge, who announced her engagement to hockey player Brooks Laich on Aug. 19, showed off the six-carat Lorraine Schwartz-designed ring while sticking her tongue out. Julianne, who was sporting face paint, was en route to the Taylor Swift concert with a group of friends, including Nina Dobrev, actress Arielle Vandenberg, Aaron Paul's wife, Lauren Parsekian, and Robin Williams's daughter, Zelda. Nina also posted a backseat shot on Instagram that she captioned, "Girls Glitter Night!" while Lauren shared a sweet group photo.

While Julianne has had an eventful month, this Summer has been all about Nina, from her fun vacation in St. Tropez to her PDA-filled outing with new boyfriend Austin Stowell. Most recently, she walked the red carpet at the Teen Choice Awards, where she picked up a surfboard for choice TV actress for a sci-fi/fantasy show and poked fun at leaving The Vampire Diaries by wearing fangs during her acceptance speech. Keep reading to see Nina and her pals heading out for the Taylor Swift concert, then check out even more stars who have stepped out for the singer's sold-out 1989 shows.