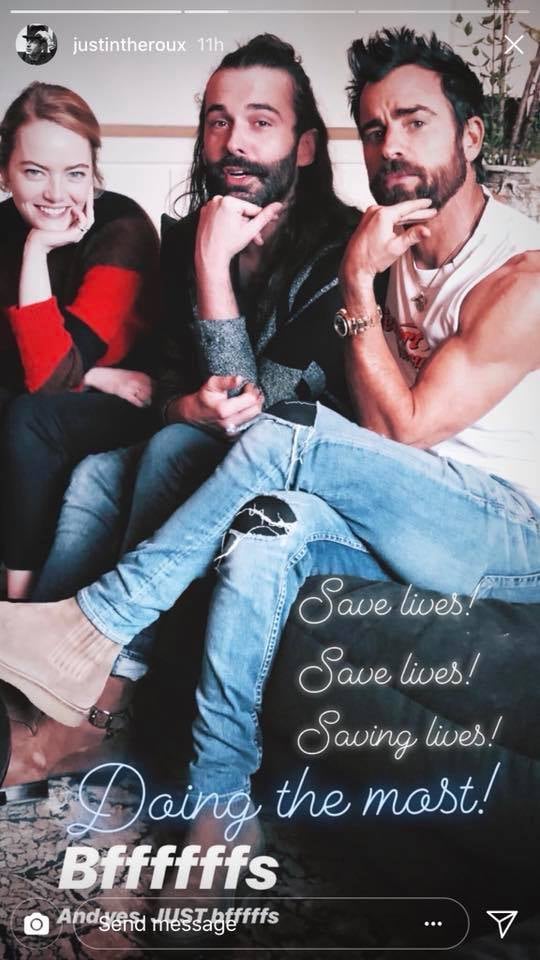 Justin Theroux and Emma Stone have been the subject of dating rumors recently, but the Leftovers star seemingly shut down the reports in a snap posted to his Instagram story last week. In it, Justin and Emma sit on opposite sides of Jonathan Van Ness, the Queer Eye reboot's lovably over-the-top grooming expert; Justin captioned the photo with "Save lives! Save lives! Saving lives! Doing the most!" a quote from Jonathan himself during one of the Netflix show's episodes. He also added, "Bffffffs. And yes. JUST bfffffs," likely a reference to reports that he was "pursuing" Emma after his split from wife Jennifer Aniston.

Related:
What Went Wrong? Everything We Know So Far About Jennifer Aniston and Justin Theroux's Split

In addition to being "JUST bfffffs," Justin and Emma are also starring together in the upcoming Netflix dark comedy series Maniac with Jonah Hill. He's also since been linked to Parks & Recreation's Aubrey Plaza, but those rumors also seem to be false.