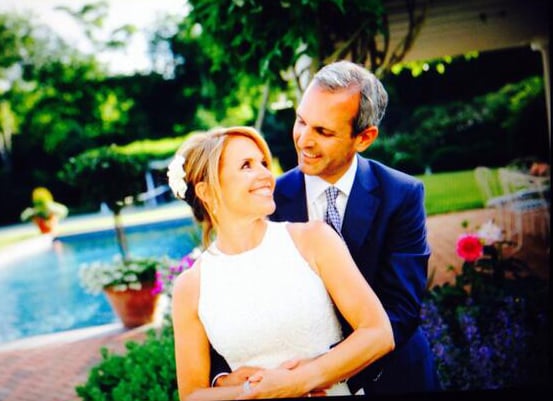 Katie Couric married financier John Molner in East Hampton, NY, on Saturday. "So excited to make my debut as Mrs. John Molner!" Katie tweeted along with a picture of the beaming newlyweds. Fifty of the couple's closest friends and family members watched as they said, "I do," at the journalist's lush Hamptons home, which she showed off on Instagram last week. "The garden is ready for the big day one week from today! (Gulp!)," she joked in the caption. As the wedding drew closer and closer, Katie told People her big day would include "traditional touches," including readings by Katie's daughters, Ellie and Carrie, and John's children, Allie and Henry. As for the dress, Katie opted for an ivory halter gown by Carmen Marc Valvo, which John helped her pick out. "I hope this isn't bad luck, but I actually tried it on for him," she said.

The nuptials mark Katie's first time down the aisle since she married Jay Monahan in 1989. Jay died from colon cancer nine years later, when Ellie and Carrie were little girls. In a candid interview with More, Katie opened up about being a single mom and shared her desire to spend life with a partner. "It's actually surprising to me that it has been almost 15 years, and I haven't remarried," she said. "I think life is more fun when you have someone in your life. And I always wanted to find a father figure for my daughters, but it hasn't worked out that way." That all changed when Katie and John got engaged in September 2013 after nearly two years of dating. Congratulations, Katie and John!