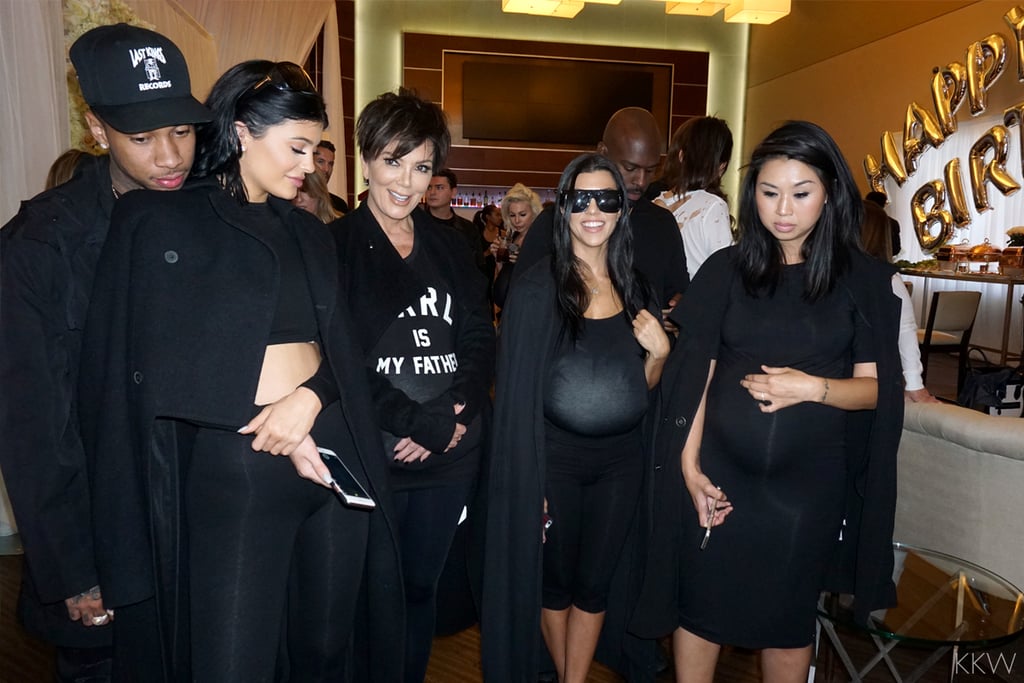 Kendall Jenner may have celebrated her 20th birthday with family and friends in LA on Monday night, but don't forget about her sister Kim's big bash last month! Kim and Kanye West matched up for her 35th birthday party in Thousand Oaks, CA, and now she's sharing new snaps from inside the event. The couple coordinated in neutral outfits for the event, which was held at the Westlake Cinepolis theater and brought out Kim's sisters Kourtney, Kendall, and Kylie, as well as mom Kris Jenner, who made her way inside hand in hand with her boyfriend, Corey Gamble. Also in attendance was Kylie's boyfriend, Tyga, and with the exception of runway favorite Kendall, the crew wore all black for the big party.

Missing from the fun was Khloé Kardashian, who was stationed by the side of her estranged husband, Lamar Odom, at Cedars-Sinai hospital in the wake of Lamar's recent hospitalization. Though she wasn't on hand for the party, Khloé did send a birthday shoutout to her big sister via Instagram, saying, "Today is about you!!! Enjoy it Mrs West!!! I love you, My bestie, my sister, my rider!" Shortly after, Rob and Kourtney followed suit with messages of their own.

In typical Kanye fashion, the rapper went above and beyond for Kim's surprise party, renting out an entire movie theater and screening the new Steve Jobs film. He also had everyone dress up as their "best pregnant-Kim look", which he provided baby bumps for upon arrival. A source on the scene told Us Weekly that "all the gifts were wrapped in black and white" and there were white floral arrangements on each table outside. Kim took to Twitter earlier in the day to thank her fans and followers for their birthday wishes, writing, "love you guys so much!!! Thank you for all of the birthday love!" See all the fun photos from Kim's 35th birthday party, then keep the celebration going with a look back at her epic evolution and sexiest bikini photos.

Kim Kardashian
Kim Kardashian Posed in the Shortest Under-Boob Crop Top, and Fans Have Thoughts
by Sarah Wasilak 11 hours ago