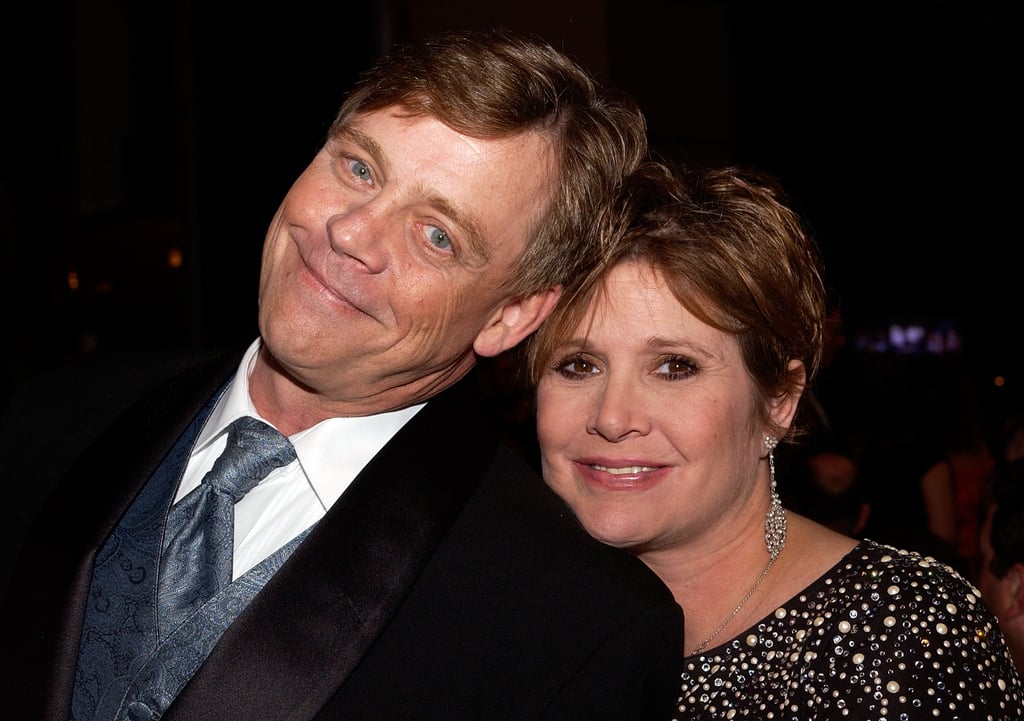 Mark Hamill has a special message for his late onscreen space twin, Carrie Fisher. On Thursday, the 67-year-old actor gave a sweet shout out to Carrie, who died two years ago of cardiac arrest at the age of 60. "It makes me so happy to know how overwhelmed & touched she would be by the worldwide outpouring of love & affection for her today," he tweeted, including the hashtags #AlwaysWithUs, #CarrieOnForever, and #KeepMovingThingsAreBoundToBeImproving. Mark and Carrie starred together as twins Luke Skywalker and Princess Leia Organa in five Star Wars films.

It makes me so happy to know how overwhelmed & touched she would be by the worldwide outpouring of love & affection for her today... ❤️#AlwaysWithUs #CarrieOnForever #KeepMovingThingsAreBoundToBeImproving pic.twitter.com/JdAMjWwtPl

In 2017, Mark also honored Carrie at the Disney Legends award ceremony when giving a speech. "We loved each other, and what a great thrill it was to come back to The Force Awakens at that time in our lives," he said. "There was a comfort level with each other. We could rely on each other, and there was a deep respect."

Mark's recent tribute comes shortly after Carrie's daughter, Billie Lourd, paid her respects to her mother in a touching Instagram post. She shared a video of her playing the piano and singing one of Carrie's favorite songs, "These Days" by Jackson Browne. "I hope this encourages anyone feeling a little low or lost to 'keep on moving,'" she wrote in the caption. "As my Momby once said, 'take your broken heart and turn it into art' — whatever that art may be for you."

Kim Kardashian
Kim Kardashian Bonded With Bridgerton's Nicola Coughlan Over — What Else? — Corsets
by Victoria Messina 1 day ago

Kim Kardashian
Chrissy Teigen Weighs in on Kim Kardashian and Kanye West's Divorce: "She Tried Her Best"
by Monica Sisavat 2 days ago

Chrissy Teigen
Chrissy Teigen Is Officially Back on Twitter, and Our Timelines Are Incredibly Blessed
by Kelsie Gibson 1 week ago