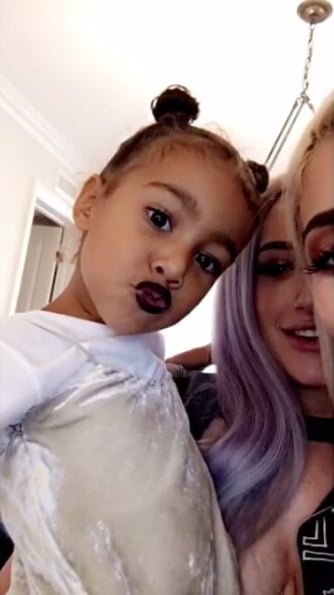 North West is only 3 years old, but she's already pulling off beauty looks most people decades her senior are too scared to try. While attending the birthday party her aunt, Kylie Jenner, threw for Tyga's son, King Cairo, North was happy to test out one of Kylie's boldest Lip Kits. Like any good aunt would, Kylie painted the lip color — which looks like Dead of Knight? — on her adorable niece, who specifically chose the dark shade (pink is too passé for North, obviously). She then made kissy faces at the camera for Kylie's Snapchat, proving that she's come a long way from being terrified of those filters. Kylie later posted a photo to Snapchat of North holding a Lip Kit in her hand with the caption, "what happens at Auntie Kylie's stays at Auntie Kylie's." Maybe there's a chance Kim and Kanye don't follow her? 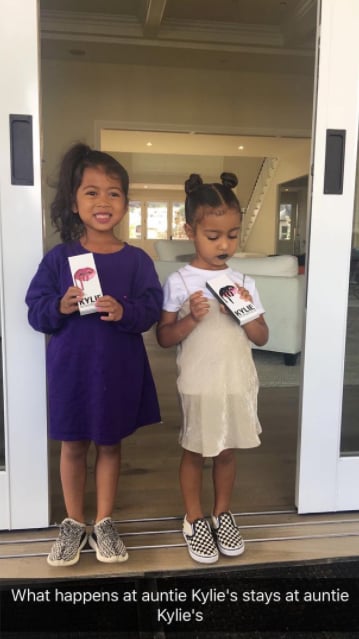 It's worth noting that this is one of the first times North has been seen with her extended family since her mother's terrifying robbery at gunpoint in Paris and production on the new season of Keeping Up With the Kardashians was put on hold. Before the harrowing incident in Paris went down, North enjoyed a fun family vacation with Kim and her baby brother, Saint, in Mexico in August, and took in a Broadway show with her cousins in NYC in September. Khloé Kardashian has since spoken out about her family's use of social media, and how they plan on "pulling back a little bit," so enjoy these sweet glimpses of North while you can.