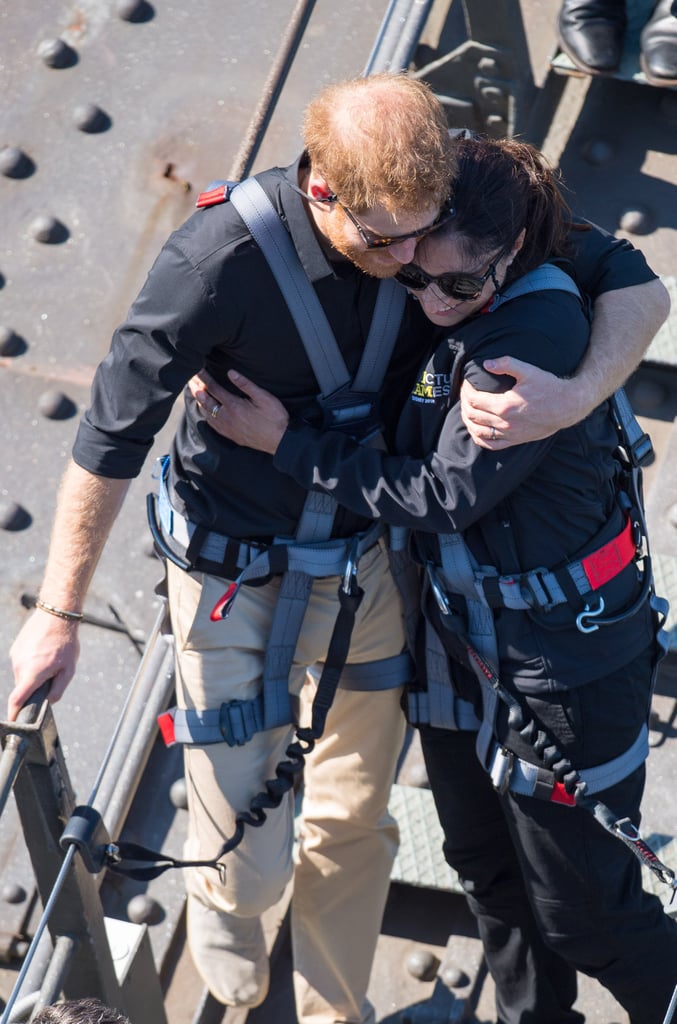 Prince Harry and Meghan Markle's tour of Australia is more than just receiving gifts and praise from adoring fans. It's also about getting the chance to connect with people on a personal level, which is precisely what Prince Harry did on Friday when he scaled the Sydney Harbour Bridge alongside Australia's Prime Minister Scott Morrison and Invictus Games competitors. One of those competitors who joined the Duke of Sussex in climbing the bridge was 41-year-old Gwen Cherne, who lost her husband and Australian special forces officer Peter J. Cafe to suicide in February 2017.

Harry and Gwen spoke for about 10 minutes about a number of topics, including the experiences of loss and grief. Harry, who lost his mother, Princess Diana, at the age of 12, comforted Gwen while they talked. "He understood what I meant. When you understand loss, I think it's obvious," Gwen said in an interview with People. "He did ask me if I was getting the support I need from the Defense and ex-servicemen and veteran community."

Gwen, who is an adviser for widows, veterans, and families for the Australian Department of Veterans Affairs and an Invictus Games Ambassador, also noted that when Harry's entourage tried to get him to keep walking, Harry refused to leave. "He stopped and said, 'I'm in a middle of a conversation, and I'm not going to leave this.' We were talking about my story and mental health and how difficult it is still, in our society, to talk about grief and loss and suicide," she said. "And how important things like the Invictus Games are to shedding light on, and allowing people to start to have these conversations that are great to have."

Harry also asked Gwen about her three children, Emily, Lachlan, and Tom, and how they've all been coping. "Lachlan is the spitting image of my husband. Harry said something like the children must remind you of him, or live on in him," Gwen said. "And I said my son is so much like him. It was comfortable and thoughtful."

View photos of the touching moment as well as the crew climbing the bridge ahead.