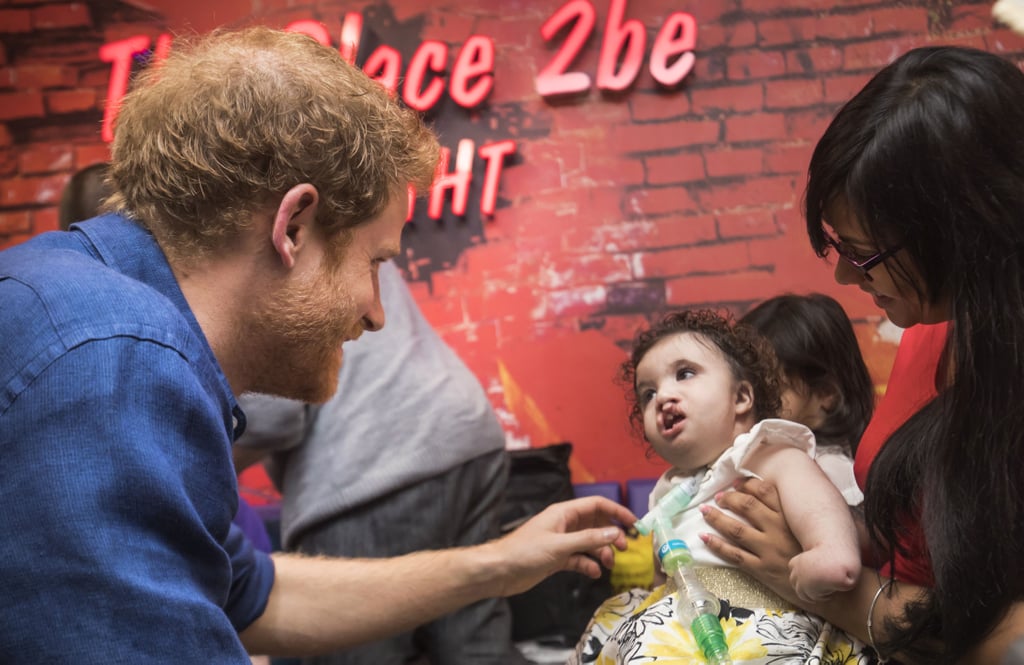 Prince Harry officially kicked off his two-day visit to Leeds on Thursday. The royal attended the Leeds Leads: Encouraging Happy Young Minds charity fair, where he took part in a panel and addressed the mental well-being of the city's young people. Harry praised the community for their commitment to encouraging people to seek help for mental health problems, saying, "I have been so impressed by the commitment of this City and the Leeds Community Foundation in focusing on mental health. You have been leading the way in bringing funding and expertise together in support of local community solutions." Harry then spent his afternoon at the Sky Try Rugby League Festival, which aims to inspire students across Leeds to take up the sport. Not only did Harry turn on the charm while coaching a group of kids and chatting it up with the team's mascot, but he also fully embraced his new role as patron of the Rugby Football League.

The following day, Harry paid a special visit to the home of a little boy named Oliver, who is receiving support from WellChild's Helping Hands project. Harry is a patron of the charity, and the project will help transform Oliver's garden into a space that he can finally access safely and enjoy with his siblings. The royal then concluded his trip with a heartwarming visit to the Leeds Children's Hospital, where he met with several young patients and their families.

Harry has been opening up more and more in recent months about his own mental health battles. In addition to launching the mental health campaign Heads Together with Prince William and Kate Middleton, the royal recently talked about how he sought professional help to cope with the tragic death of his mother, Princess Diana. "Not to get too personal, if you lose your mum at the age of 12 then you've got to deal with it and the idea that . . . 15, 17 years later I still hadn't dealt with it, Afghan was the moment," he said in an interview with Forces TV. "Once I plucked my head out of the sand, post-Afghan . . . it had a huge . . . life-changing moment for me. It was like, right, you are . . . Prince Harry, you can do this, as long are you're not a complete tit, then you're gonna be able to get that support, because you've got the credibility of 10 years' service and therefore, you can really make a difference."

The Royals
Baby Archie (and His Red Hair!) Are the Stars of Meghan Markle and Prince Harry's Holiday Card
by Yerin Kim 4 weeks ago