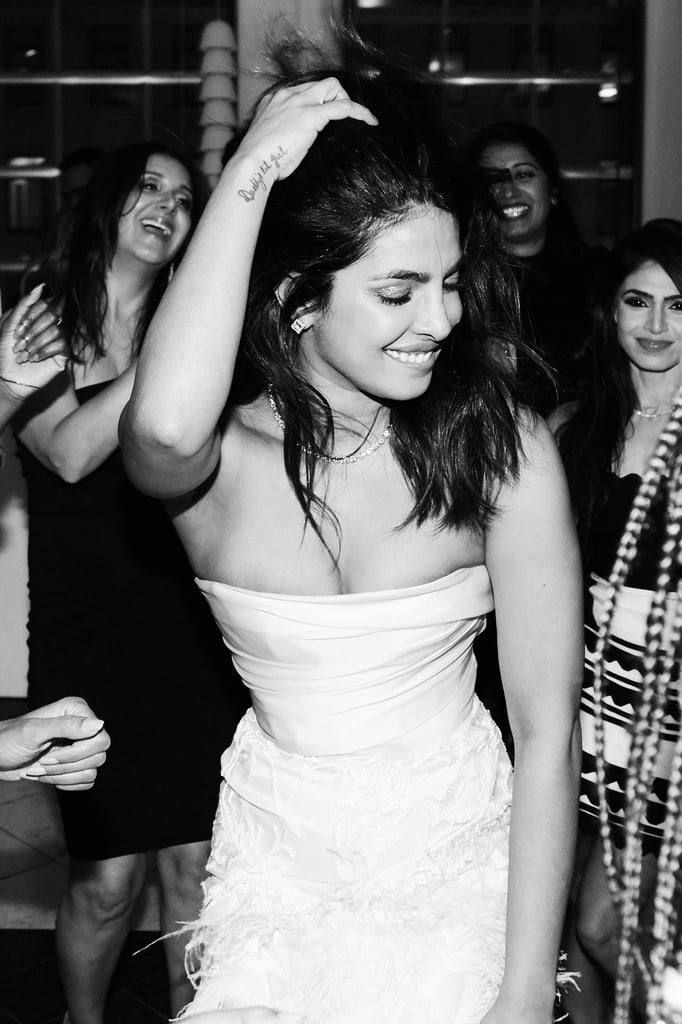 Priyanka Chopra is saying goodbye to the single life! The bride-to-be celebrated her bridal shower at Tiffany & Co.'s Blue Box Cafe in NYC on Sunday, and it was nothing short of magical. The 36-year-old Quantico actress looked gorgeous in a white feathered dress by Marchesa and was all smiles as she arrived at the bash hosted by her bridesmaids Anjula Acharia and Mubina Rattonsey. The shower brought out Priyanka's nearest and dearest including Danielle Jonas, Kelly Ripa, and Lupita Nyong'o. Pal Meghan Markle was unfortunately on her royal tour of Australia and New Zealand with Prince Harry, so that's likely why she couldn't make it.

During the party, Nick Jonas's mother, Denise, reportedly gave a beautiful speech about Priyanka. "It was so fun!" a source told E! News. "There were about 100 people there." Guests were also treated to swag bags featuring a mini cake shaped like a Tiffany box, a passport case, and champagne.

Nick and Priyanka got engaged after two months of dating this past July. The 26-year-old singer reportedly closed down a Tiffany & Co. store to find the perfect ring, so perhaps that's why Priyanka chose to have her bridal shower at the jewelry store's cafe. According to Us Weekly, the pair will be tying the knot in India this December. "They really want to blend wedding traditions from both of their cultures that are important to them," an insider revealed. "Nick and Priyanka can't wait to get married. They have amazing chemistry and can't wait to have kids." Let the wedding countdown begin!

Related:
50 Priyanka Chopra Pictures So Hot, They Might Set Off Your Fire Alarm
Previous Next Start Slideshow
Priyanka ChopraCelebrity Instagrams

Lori Harvey
Lori Harvey Rocks a Sheer, Tiger-Print Catsuit For a Night Out
by Shelcy Joseph 23 hours ago