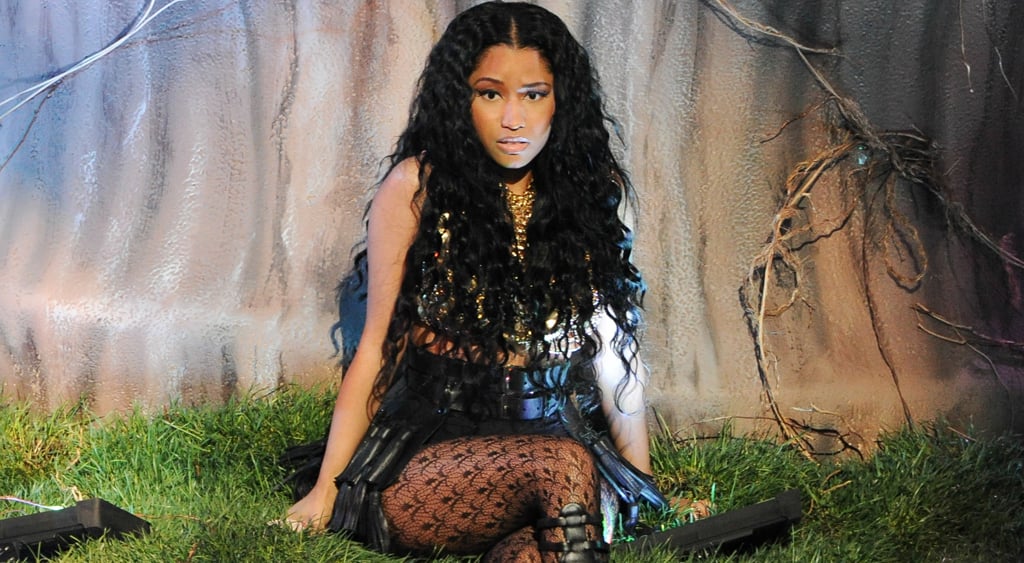 Nicki Minaj's rehearsal for the MTV Video Music Awards took a frightening turn on Friday. During a run through of the singer's routine for her hit "Anaconda," a six-foot-long boa constrictor bit an unidentified backup dancer's left arm. According to MTV, the practice stopped following the bite, and Nicki rushed over to check on the dancer. "Did she get bit by the snake?" Nicki reportedly asked.

The snake wasn't venomous, but MTV didn't take any chances — the dancer's wound was cleaned by an on-site medic, and she was immediately taken to a hospital. "It is in no way life-threatening, but scary," said Chris Velvin, director of production safety for Viacom Media Networks. "We wanted her to start getting treatment as soon as possible." Meanwhile, the snake was removed from the stage by its handler. The reptile would likely be replaced by another snake for the big show on Sunday, MTV said. This isn't the first time a snake has participated in the VMAs — in 2001, Britney Spears stole the spotlight with a snake draped across her neck during her performance of "I'm a Slave 4 U."

The VMAs will mark Nicki's first time performing "Anaconda" on live TV. She released the song, which is based on‎ Sir Mix-a-Lot's dance-floor classic "Baby Got Back," earlier this month and debuted the racy music video just this week. Within 24 hours of its release, the clip garnered 19.6 million clicks on Vevo, breaking a record for the video site.

MTV VMAs
From J Balvin to Doja Cat, Here Are the Artists Performing at the 2020 MTV VMAs
by Monica Sisavat 17 hours ago

Beyoncé Knowles
Yes, Black Is King Is a Reimagining of The Lion King — Did You Catch All the References?
by Amanda Davis 1 day ago

Beyoncé Knowles
Music Mood Board: All Things Beyoncé, Because Black Is King
by Brea Cubit 3 days ago

Beyoncé Knowles
From Blue Ivy to Wizkid, See All the Artists Featured on Beyoncé's Black Is King Visual Album
by Chanel Vargas 2 days ago