Ariana Grande blessed us with her sixth studio album, Positions, on Oct. 30, and it's no surprise that seven of the songs featured on it were written by her longtime friend and frequent collaborator Victoria Monét. Ariana and Victoria's friendship can be traced all the way back to the singer's Nickelodeon days as Cat Valentine on Victorious. In fact, Victoria is responsible for some of Ariana's biggest hits, including "My Everything," "Thank U, Next," and "7 Rings." In 2017, Victoria also served as the opening act for Ariana's Dangerous Woman tour, and they even have a song together called "Monopoly."

In a 2019 interview with NME, Victoria opened up about what it's like to work with Ariana, saying it's been "easy" and "really fun." She added, "We've just been friends for so long . . . I imagine us [in the future] being really old ladies talking about how he used to do it. 'Remember when we did 'Thank U, Next?' Remember when we toured here?' You know, just having discussions over tea. This'll be a forever thing." From working the stage to writing songs together, it's clear that Ariana and Victoria are the ultimate dream team! See some of their cutest moments ahead. 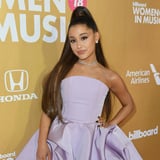 by Shelcy Joseph 9 minutes ago