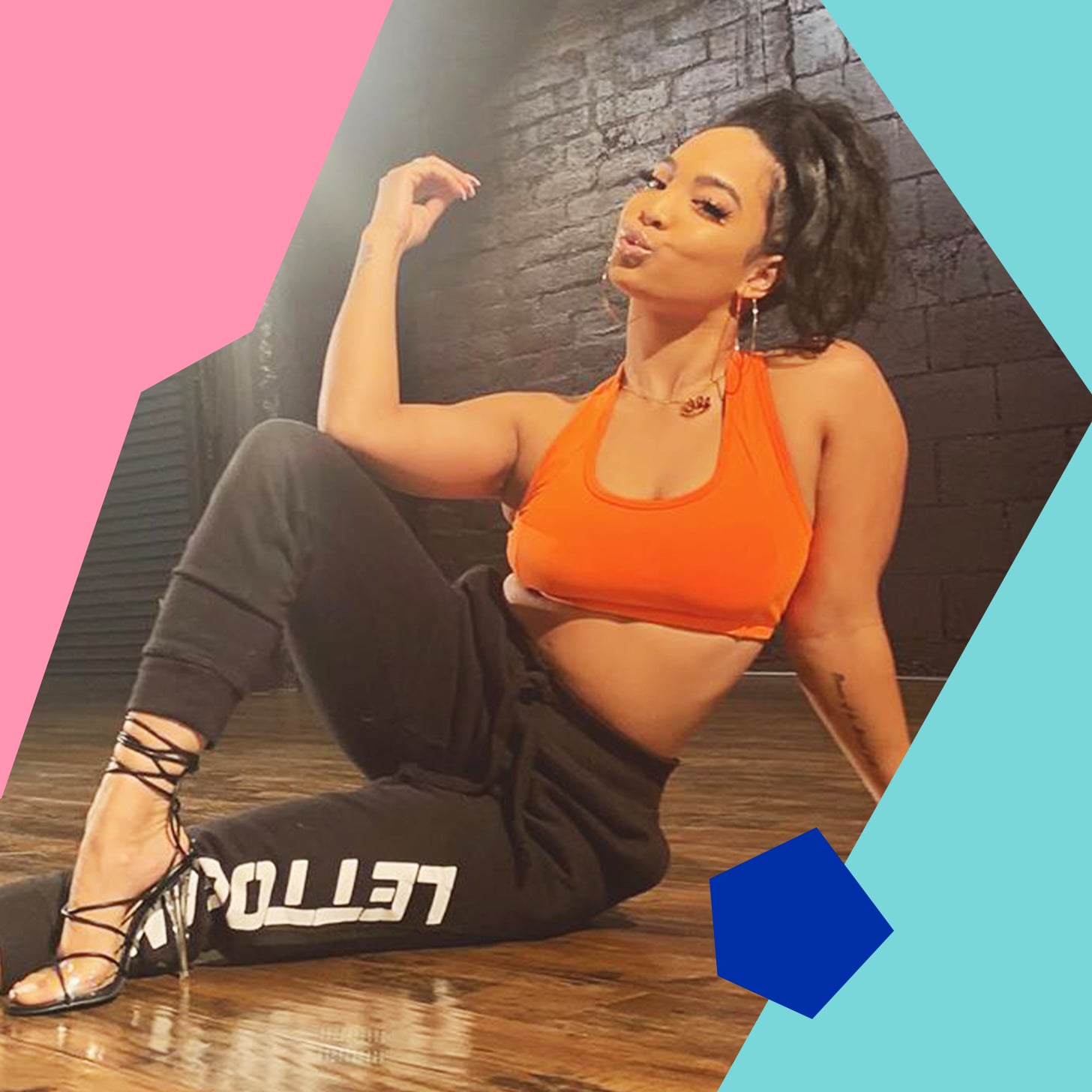 In a dance studio tucked away on an empty Los Angeles side street, 65 people faced their mirrored selves, stretching in unison, readying their bodies for emotional release. Their footwear varied: well-worn high top kicks, thigh-high boots devouring jiggly legs, chunky dad sneaks, lofty platform stilettos, and a particular pair of mesh open-toe booties that belonged to Jay Lamb. "I treated myself to come to Los Angeles solely for Ms. Aliya's class," the UK visitor later revealed. Queens N' Lettos was Jay's birthday gift to herself, but she wasn't just there to dance. "It's a bit of therapy in a way," Jay, 30, explained.

As the warm-up wound down, Ms. Aliya, better known as @TheAliyaJanell, weaved her way through the loose-limbed crowd. The founder of the world-renowned stiletto class looked just as she did in the viral dance videos that amassed her 4.4 million Instagram followers and nearly 2 million YouTube subscribers. Wearing a topknot so taut, the rogue curl at her nape had to be intentional. Crisp winged eyeliner that required composure. Peek-a-booty shorts and heels that hoisted her five inches into the air. Aliya was snatched like a fist ready to blow.

"This is a free spirit zone, b*tch!"she hollered. Heels aren't required, and questions are encouraged. "Practice using your voice," the 25-year-old dynamo added. She and two assistants spent the next 90 minutes breaking down the 50 second-long combination she'd composed to Nicki Minaj's new song "Yikes." Aliya had distilled each savage bar into a physical, cinematic opera, with some meticulous blink-and-you-missed-it footwork here and a few sumptuous body rolls that stretch seconds into lifetimes there.

Her special fluency in Nicki makes sense. Back in 2017, the rapper hired Aliya to choreograph several music videos and live performances after spotting an Instagram clip of the young social media star dancing to her song "Itty Bitty Piggy." Demand had also grown for classes outside of Aliya's hometown, so that same year she launched a traveling series called Queens N' Lettos. Her signature choreography is where respectability politics go to die; a space that showcases the delicate artistry of hood behavior, hot girl mentality, and hood rat antics, and represents a certain kind of freedom. These classes earned Aliya an international league of fans whose loyalty morphed Queens N' Lettos into a full-on lifestyle movement.

"She really gets me to get out of my head in her classes," said local queen Tiana, 25. Like many of her dance mates, she lingered in the studio long after the last body had been rolled. "I'm not thinking about the moves. I'm just dancing."

I caught up with Aliya the next day to learn more about her unapologetically raunchy choreography, the time she bombed an audition for a Jennifer Lopez gig, her stressful yet rewarding with Nicki Minaj, and the challenges of performing for an online audience of millions.

Related:
You Need to Know Her: Stacey Louidor, the Haitian-American Model Handpicked by Rihanna

On Prioritizing Herself First, and Followers Second

"A personal challenge that I'm facing right now is having to choreograph a new combination every single week. I really get in my head because I always want to one-up myself and make sure that I'm growing, while also staying true to who I am. And that's really difficult because I'm sometimes swayed by comments on my Instagram and YouTube pages, where people tell me 'You're doing the same moves' and "You only know how to twerk and be sexy.'

"It's important as a choreographer to stay grounded and secure with yourself and not let outside thoughts and opinions change who you are."

Recently, I wanted to show people that I could do more than pop my ass and twerk, that I was able to dance in different styles to different kinds of artists while still being true to my own style. So I choreographed a stage performance routine to "Scream" by Michael Jackson and a Latin dance style combo to "Mi Gente" by J Balvin. And guess what? Those same people hated it! Nobody came to my class those weeks. The videos of those routines didn't really didn't do well, numbers-wise, on YouTube or Instagram. And it's because I wasn't in my element, so those routines and videos just didn't feel the same. My element is being sexy, hood, and street. I like it when my audience likes the music and choreography that I pick, but I like it even more when it's my decision and I stay true to what I want.

It's important as a choreographer to stay grounded and secure with yourself and not let outside thoughts and opinions change who you are. There are so many people in the dance community and industry that want the same thing, so it's easy to compare yourself to others and convince yourself you're not as good as so-and-so. Just remember that you're doing the best you can, because at the end of the day, whatever feels good to you is what's going to go off!"

On Celebrating Self-Love Through Sexy Moves

"Stiletto dancing is a form of dance that allows dancers to focus on their relationship to their bodies while dancing to the music that they love. And it's a workout as well. Then you have choreographers and teachers like myself who throw on heels for our hip-hop combinations and classes to show versatility. We're strong and sexy all at the same time. Being sexy is not an easy thing for a lot of people, especially for those who aren't trained or professional dancers. That's why at the start of my tour classes, I have students form a circle and share a recent personal win with the class, whether it's something they're grateful for, something they've overcome, or something that they're proud of. It's really important that we ground ourselves in self-love and security before we get all sexy and learn a routine.

At the end of the day, you're dancing with yourself. And when you don't like yourself, there's such a disconnection, and you can feel it when you're trying to be sexy. When you're being sexy, you're connecting to something or someone, like an audience or a camera. But how can you be connected to something where you're not even connected to yourself? So that's where my brand Queens N' Lettos comes in. That's where I'm at right now. It's not only about being sexy and versatile, it's about loving yourself too."

On Bombing An Audition For Jennifer Lopez

"The hardest audition that I've ever been to was for Jennifer Lopez, about two or three years ago. She had one of the choreographers teach us a Latin dance combo and I'd never experienced any Latin style, or anything of that nature. Learning a new style is always difficult, but there's not a lot of time to ask questions at an audition because you've only got 20 to 30 minutes to learn and perform the choreography. Jennifer Lopez wants explosive dancers with massive, crazy energy and huge movements, so you have to keep up. It was the hardest thing. I went down in flames. Like, I burned like myself alive, to a crisp! So Jennifer Lopez and her choreographers helped me realize I need to be able to adapt to all the different dance styles and trends out there.

"After I posted a video of a routine I'd choreographed to Nicki Minaj's song 'Itty Bitty Piggy' in 2017, she hired me to choreograph the music videos for 'Barbie Tings,' 'Chun Li,' and 'Ganja Burn.; We also worked together in 2018 on her performances for Saturday Night Live, the BET Awards, and the VMAs. But a lot of people know me as the girl from the 'Chun-Li; teaser she released before dropping the official music video. That experience was crazy. She had me do a whole take, just me and her vibing to the track. It was the most random and stressful situation ever, because it was like 5:00 in the morning and that routine wasn't choreographed! I literally just had to improvise, adapt to whatever she wanted to do, and make it look good.

"Putting yourself first means not having to explain yourself."

I realized this was my opportunity to be taken seriously by other choreographers and my higher-ups. A lot of people like to downplay the teaser — even I like to downplay it because it wasn't as strong as I wanted it to be — but I think it was a big moment in the dance world. Like, 'When have you ever gotten hired by a celebrity and been in the video with them, just you and them?' The fact that Nicki gave me the opportunity to showcase my talent with her is what made the whole experience even more special."

"Throughout history, women have been neglected and underestimated, always positioned behind men or kept the behind the scenes and never really at the forefront. So in this day and age, it's time to finally enjoy ourselves and other women and our bodies. Stiletto classes like mine offer a great space to do that while uplifting, supporting, and celebrating each another, and sometimes that happens to involve dancing in a sexual way. If you're talking negatively about this dance style and sexy routines, chances are it's because you're scared to do it. People on the internet may not understand that but at the same time, I'm not explaining myself, because putting yourself first means not having to explain yourself. So if they don't like it, then they don't like it — and that's just that on that." 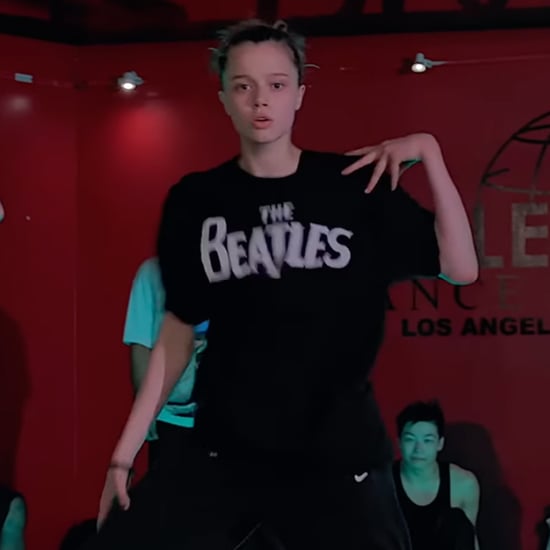 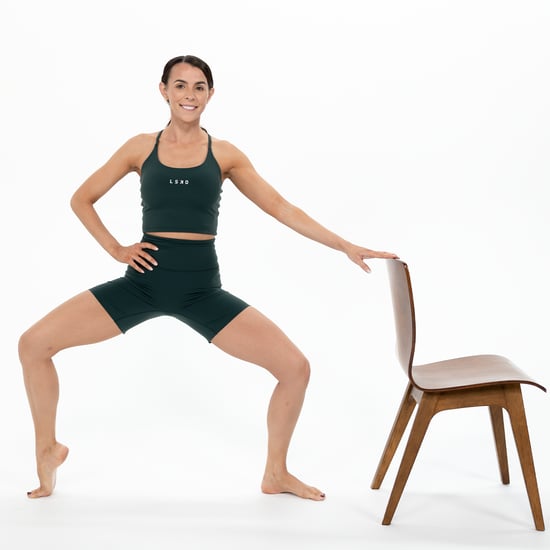