Ever since Justin Bieber went off and married Hailey, I've been nursing a broken heart (yes, I'm fully aware that I have a whole boyfriend at home). However, I will be the first to admit that they make a really cute couple. Case in point: their recent LA outing. On Wednesday, Hailey and Justin looked totally smitten as they held hands and shared a sweet kiss while strolling around West Hollywood.

Justin and Hailey have been basking in newlywed bliss since they tied the knot in September 2018, and again in September 2019. Not only did Justin write an entire album about his wife, but during his recent appearance on The Ellen DeGeneres Show, the singer said Hailey basically has him "wrapped around her finger." Hailey also shared a loving birthday tribute for her husband on March 1, writing, "Happy birthday best friend. thank you for putting a smile on my face every single day.. I love you." Ah, love! 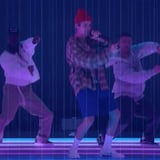