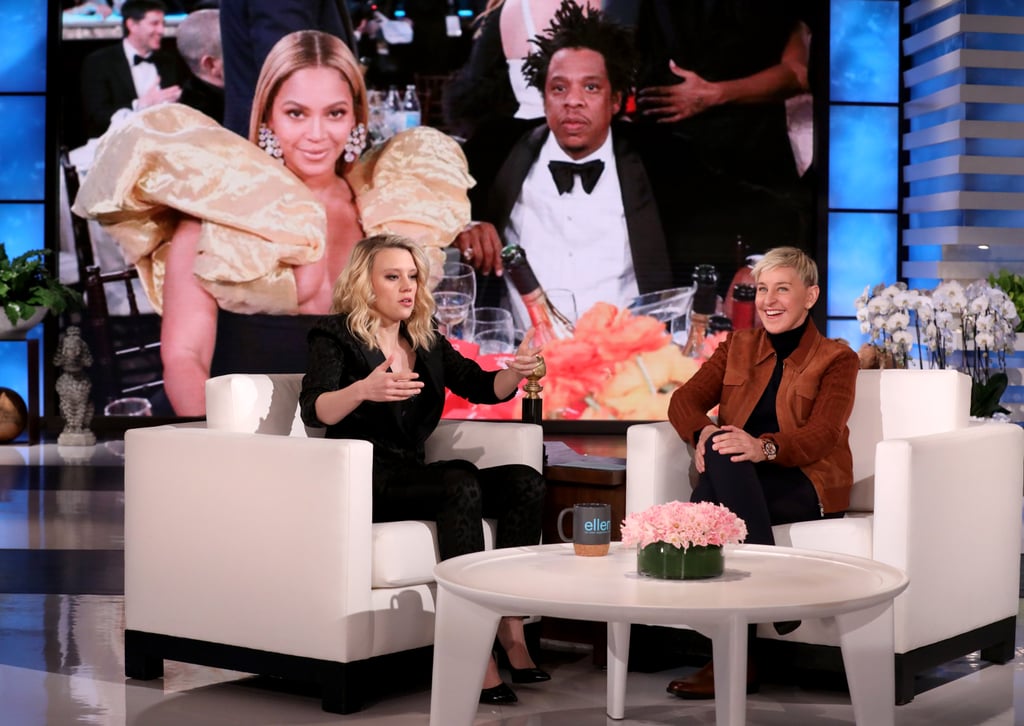 Kate McKinnon had herself quite a weekend. Not only did she attend her first Golden Globes, but she also presented Ellen DeGeneres with the Carol Burnett Award for her outstanding contributions to television on or off the screen. You'd think presenting the award would be the most nerve-racking part of the evening for the Bombshell star, right? Well, that'd be true if she hadn't been seated at a table with Beyoncé and JAY-Z. On Tuesday, Kate sat down on The Ellen DeGeneres Show, where she praised the host for asking her to present the award and also explained their very star-studded table at the award show.

At Kate and Ellen's table was Kate's sister, Portia de Rossi, Carol Burnett, and Jay and Bey, whom Kate called "the King and Queen of America." Upon finding out they were sitting with the couple, Kate and her sister immediately panicked and made a list of what they could talk about. "We live in one-bedroom apartments in New York City, what can we say? 'Do you use HelloFresh? What kind of milk do you like to drink?'" she joked. And while her sister, Emily Lynne, had "balls of steel," Kate found herself anxiously pretending she had something on her pants. "I blew it," she said.

Kate meets just about every single celebrity on SNL, but she said it herself that they're "not Beyoncé. We all know she's different." Watch Kate talk about the hilarious moment on Ellen ahead, and see more from her big night at the Golden Globes.

The Ellen DeGeneres Show
Selena Gomez and Jennifer Aniston Can't Stop Gushing Over Each Other, and It's Adorable
by Monica Sisavat 1 day ago

Winter Fashion
Jennifer Aniston and Selena Gomez Both Wore LBDs, and IDK Which One I Love More
by Nikita Ramsinghani 4 hours ago

by Nikita Ramsinghani 52 seconds ago