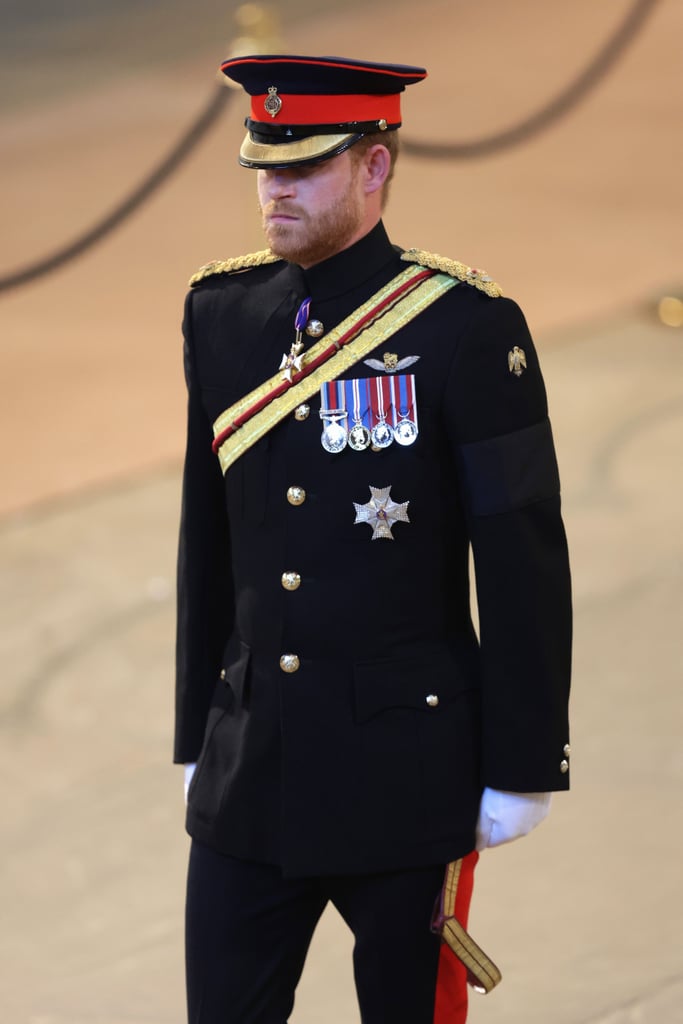 On Saturday, Sept. 17, Prince Harry wore his military uniform for the first time since 2020 at the request of his father, King Charles III. Harry is wearing his uniform alongside his brother, William, the Prince of Wales, and Queen Elizabeth II's six other grandchildren — Peter Phillips, Zara Tindall, Princess Beatrice, Princess Eugenie, Lady Louise Windsor, and James, Viscount Severn — as they stand vigil around the queen's coffin as she lies in state at Westminster Hall.

As reported by the BBC, the grandchildren's vigil is expected to last for around 15 minutes. Harry is standing at the head of his grandmother's coffin, while William stands at the other end. This marks the first time the grandchildren of a British monarch have taken part in a vigil.

Prior to Saturday, Harry wore plain mourning clothes at all of the public events he's attended since the queen's passing. At times, he did wear the medals earned during his decade of military service, but he refrained from donning his uniform out of respect for his grandmother.

Originally, the palace announced that only working members of the royal family would be allowed to wear their uniforms to the mourning ceremonies for the queen. Harry previously acknowledged the fact that he wasn't permitted to wear his official military uniform in a statement that a representative shared with Entertainment Tonight on Sept. 13. "Prince Harry, The Duke of Sussex will wear a morning suit throughout events honouring his grandmother," the statement read. "His decade of military service is not determined by the uniform he wears and we respectfully ask that focus remain on the life and legacy of Her Majesty Queen Elizabeth II."

On Sept. 15, Bazaar.com reported that Buckingham Palace changed its mind and informed the Duke of Sussex that he could wear his uniform on Saturday evening when he joined the rest of the royal family at Westminster Hall, after all. The change came after it was announced on Sept. 10 that Harry would not be allowed to wear his military uniform, with The Telegraph reporting that "working members of the royal family will wear military uniform when present at five ceremonial events during this period of mourning the Queen."

Harry, who served in the British Royal Army for 10 years, per Entertainment Tonight, was stripped of his honorary military appointments following his departure from senior royal duties in 2020. However, sources also told The Telegraph that Prince Andrew, who was stripped of his royal titles in 2022 following allegations of sexual misconduct, would be permitted to wear his uniform at the queen's vigil, though not at several other ceremonial events.

Harry — who shared a close relationship with his grandmother even after stepping back from royal duties — offered a sweet tribute to her in a statement shared on the Archewell website. "Granny, while this final parting brings us great sadness, I am forever grateful for all of our first meetings—from my earliest childhood memories with you, to meeting you for the first time as my Commander-in-Chief, to the first moment you met my darling wife and hugged your beloved great-grandchildren," he wrote. "I cherish these times shared with you, and the many other special moments in between. You are already sorely missed, not just by us, but by the world over. And as it comes to first meetings, we now honour my father in his new role as King Charles III."

Harry and his wife, Meghan Markle, reunited with Prince William and Kate Middleton, Princess of Wales, at Windsor Castle on Sept. 10 in the wake of the queen's death. The Duke of Sussex initially rushed to the queen's side after receiving news of her declining health on Sept. 8; she passed away at Balmoral that day at the age of 96 after a 70-year reign.

by Noelle Devoe 37 minutes ago

by Danielle Jackson 47 minutes ago