After six years of marriage to Ciara, Russell Wilson popped a very important question: "Can we have more babies?" On March 4, Wilson surprised Ciara, who was guest hosting "The Ellen DeGeneres" show, with a massive bouquet of red and pink roses. While the gesture was incredibly sweet, Ciara knew her husband was up to something. "Guys, the funny thing is that Russ makes me really nervous," Ciara told the audience, laughing. "You do, for some reason. I don't know — I kind of know why. I always feel so vulnerable when I'm with you in this setting."

"I love seeing you in daddy mode. It's the cutest thing."

A moment later, Wilson proved that Ciara's suspicions were correct. "Well I do know everything about you, first of all. And second of all, I'm about to make you more nervous. You guys want me to make her more nervous?" Wilson asked the audience, who let out a cheer as Ciara interjected, "No, no we don't." Within seconds, Wilson was on one knee in front of Ciara's armchair. "I have a serious question," he said, holding her hand as he asked her to have more kids with him. "Just give me one more, at least."

Bursting into laughter, the mom of three took a moment to compose herself before nodding. "We definitely can, but we [need] a little time before we get there," Ciara agreed. "So silly. I was like, 'What? We've already been there before.' But I'm down to do it again with you!" 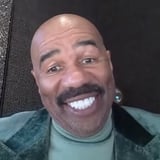 The couple are currently parents to 7-year-old Future Zahir Wilburn, 4-year-old Sienna Princess Wilson, and 19-month-old Win Harrison Wilson. "I love seeing you in daddy mode. It's the cutest thing," Ciara said. " I love seeing you with Sienna. I'm a daddy's girl so I will say that's one of the sexiest things about you . . . You're the best, babe. I love you."

Excited to talk about their kids, Wilson added that he was the one to come up with their daughter's name, Sienna, a mix of Ciara's name and his sister, Anna's, name. "[My dad] used to say, 'You know, son, take all the grains of sand from the seven seas and multiply them by 10,000 and you'll only have a mere fraction of my love,'" he added as Ciara melted behind her bouquet. Watch the full video above and check out the couple's new children's book, "Why Not You?" ($17) here.