Not even pets are immune to Harry Styles's rock 'n' roll charm — some just express it in, uh, less conventional ways than others. During a virtual interview from London on The Ellen DeGeneres Show on Tuesday, Salma Hayek gushed about her pets, including several dogs, horses, alpacas, rabbits, and chickens. But her "best friend" by far is her pet owl Kering, named after husband François-Henri Pinault's luxury fashion group, whom she rescued when the bird was still an owlet. "She's very funny," Salma assured Ellen as she tried to coax the bird onto the screen.

As charming as Kering may be, Salma revealed that the bird doesn't always have the best manners, especially when it comes to mealtimes. "One time there was a very important celebrity — I will not say his name — and he was really excited about the owl and was hoping that the owl would go on his head because it was on me," she said. Kering did eventually fly to the celebrity in question — who Salma later confirmed was actually Harry freaking Styles — and used her undoubtedly luxuriously soft new nest as a place to regurgitate the ball of hair leftover from her lunch the "minute he least expected it." "Rat hair was on his head," Salma revealed. "He was super cool, even when that happened. He's the best."

"Sometimes in the middle of the night she lands on my head — it's a little bit jarring."

In Kering's defense, I, too, might lose my lunch out of excitement if I met Harry. Between this, the super fan's fish that he once fed, and the massive fish in the "Adore You" music video, Harry sure has a way with pets.

Eventually, the owl did take a break from snacking on a mouse to make her coveted guest appearance on The Ellen Show, briefly sitting with Salma before taking flight to perch on the edge of her open laptop screen. Apparently, this isn't the only time Kering's flying has caused a slight disturbance. "She only sleeps with me when my husband is not in town. He won't have it," Salma explained. "What happens is, eventually, I go to sleep and she just keeps flying around the room. She comes and snuggles. Sometimes in the middle of the night she lands on my head — it's a little bit jarring but I'm used to it. The worst is when your feet come out of the sheets and she thinks that your toes are mice and she just flies in and grabs them. That can be really terrifying to me. I try to put on socks, at least, for some protection."

Between pecking at her owner's feet and leaving surprise gifts on celebrities' heads, Kering has a truly adventurous lifestyle. See the surprisingly hilarious owl for yourself above.

Celebrity News
Ellen DeGeneres and More React to Anne Heche's Death: "This Is a Sad Day"
by Sabienna Bowman 1 hour ago

Celebrity News
Tess Holliday Addresses Brazilian Butt Lift Trend: "You're Perfect as You Are"
by Melanie Whyte 23 hours ago 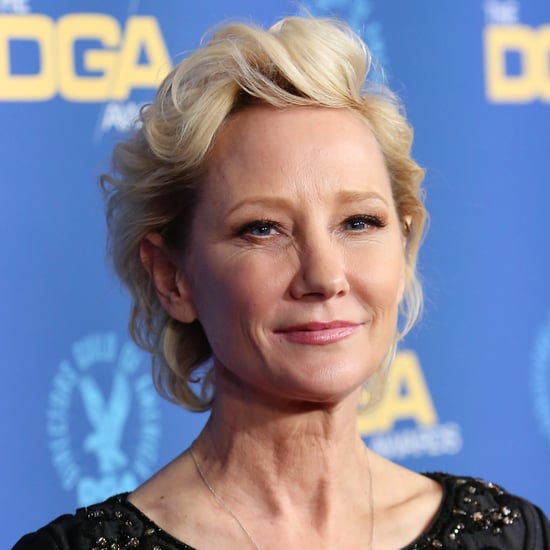