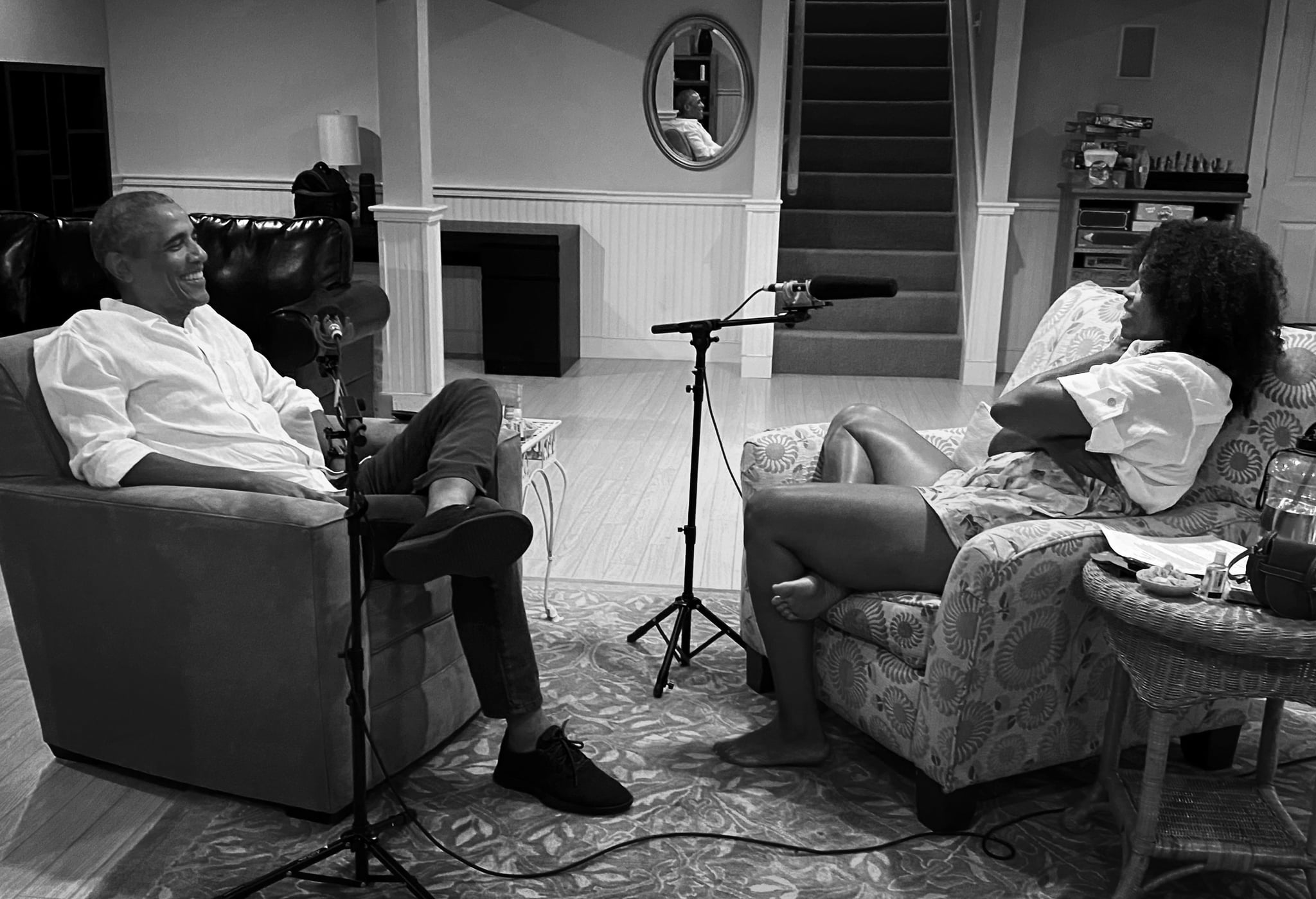 The Michelle Obama Podcast officially dropped on Wednesday, and the former first lady's inaugural guest was none other than her husband, Barack. The power couple sat down to chat — and adorably banter — about a series of topics, including their love for each other, the value of community activism, young people's perception of the government, and raising their daughters, Malia, 22, and Sasha, 19.

The intimate conversation is the first of many from Michelle's collaboration with Spotify, which will explore different facets of meaningful relationships. And if anyone knows about the importance of interpersonal connections, it's Michelle (just read her Grammy-winning book Becoming and watch her Netflix documentary of the same name). Keep reading to see standout quotes from Michelle and Barack's chat, then listen to the full episode!

On why Michelle fell in love with Barack:

Michelle Obama: You know that at the core of everything you have done politically, what I know about you as a person and one of the reasons why I feel in love with you is —

Barack Obama: It wasn't just my looks, but that's OK.

MO: You're cute, you know. But, no, one of the reasons I fell in love with you is because you are guided by the principle that we are each other's brother's and sister's keepers. And that's how I was raised!

On the shared support Michelle saw in her childhood neighborhood:

MO: Every elder lived with someone. They shared expenses, they shared households, they shared the duties of raising kids. So, there wasn't this feeling that you were supposed to do this thing called loving and supporting your family on your own. You know that seems to be kind of a new thing. And so, it felt like the community, the neighborhood I grew up with operated on that notion. And it wasn't just up to that parent to provide that stability and that love.

BO: I think I figured out once I got to school that if I am chasing after my own success, that somehow, I am going to end up alone and unhappy. And that's why I ended up going into community organizing and the work that I was doing because when I thought about how I was going to spend my life, what I looked at was what those civil rights workers had done and the freedom writers had done. And I thought, you know, that looks like hard work but it never looks like lonely work. That looks like hard and risky work but it never looks like selfish, isolated, meaningless work.

MO: I was on the track. I was checking my boxes because I was doing what I thought I needed to do because I was a poor kid. So, I didn't feel like I had the option to just go off and do other things. But I also had a limited vision of what I could be because schools don't show you the world. They just show you a bunch of careers. But I came to learn the same thing you learned that while working on the 47th floor in that fancy law firm making all that money, that it felt lonely, and it felt isolating. And, you know, I had this amazing view of the southeast side of the city from my office. I could see the lake and I could see all of the neighborhood that I came from. And I never felt further from that neighborhood than when I was sitting in that office working on briefs and cases that had nothing to do with anything that helped a broader group of people outside of myself. And it felt lonely. And I say this to young people, "Why did I leave corporate law and go into community service?" The truth is, it was selfish. I was happier. When I left that firm and started working in the city, getting out into the broader community of Chicago and seeing the interconnectedness of these neighborhoods by being alive in the dirt and the grit of helping people, I never looked back.

On the impact of community organizing:

BO: I always say the years I spent organizing, I got more out of it than the people I was supposedly helping.

MO: Really, we were young. We didn't know.

BO: We were so young and inexperienced.

MO: We were stumbling around trying to figure it. We can fix it. It's like, "No, we can't." We don't know anything.

On reconceptualizing the idea of community:

BO: And then there's another story that says, you know, let's go ahead and re-embrace those values that made everybody better off back in the '50s, '60s, and '70s, except, this time, let's do it in a way that genuinely includes everybody. To me, that's the better story — if you go back to that basic insight and just widen it and take the blinders of racism, sexism, homophobia, all those things off, and say really our tribe is everybody.

MO: Yeah. And how beautiful and safe — stabilizing — that would be. We all have each other to lean on, that we don't have to hold up this big, gigantic thing all by ourselves.

BO: Everybody benefits from their ability to advocate, to make sure the resources are coming in. That whole process of lifting all boats comes about from this network of relationships in a community. And the good news is, that when you look at all these young people who've been out there protesting in the wake of the George Floyd murder, that's their instinct. It's not uniform, and it could still go both ways in this country just like it's teetering one way or the other in countries all around the world. This is not unique to the United States, it's we just got our own version of it.

On the importance of working together:

MO: Part of what I hope that listeners take away from this conversation is not that we have the answers, but these kinds of conversations need to happen around our dinner tables and in our smaller communities for us to just sort of understand and to appreciate the importance that community plays on who we are. And that we can't do this stuff and we're not supposed to do this stuff. We weren't built to do this thing called life in a vacuum. It is much more hopeful, it is much more gratifying, much more effective to live this life as a "we." And I think as young people listen to this, as they are starting to shape their paths, I would really strongly encourage them to think about building lives that are selfless. Not just because it's the right thing to do, but it truly is the better way to live.

On political apathy in young people:

MO: The only thing that worries me, and I agree — in terms of the hope that I feel when I look at young people — just how they were raised, the values, their exposure, the questions that they have, the change in the economy that's forcing them to ask a certain set of questions — that give me hope. But the thing that I worry is that I hear, I think, too many young people who question whether voting, whether politics is worth it.

BO: Well, partly because they have been told. The message is sent every day that government doesn't work. They take for granted all the things that a working government has done in the past. In some ways, we're still living on the investment that was made by that greatest generation.

MO: I always joke, and I've always said one of the challenges of being president — like, you don't have a marketing budget, you know? There's really no structure to market government, right? The average young person knows far more about the cereal they're eating, and the car they are driving than they do about what government actually does for them because they don't have marketing budgets. There isn't a jingle.

BO: The only time they know about what government doing is when —

MO: Is when it doesn't work, right?

BO: So we're getting a good lesson in that right now.

On raising daughters and young people:

MO: When it comes to fathers raising their girls, I do think that the average father today does believe that their girl can be anything she wants to be and they are delivering those messages around the dinner table. There is a different way of parenting. But what we didn't do — we delivered those messages at the dinner table, but we didn't take them to the board room. We didn't change our workplaces. We didn't change things outside the home. We didn't institutionalize the values that we'd been teaching this generation of kids. So, now, they are growing up. They are leaving the dinner table, and they are going out into the world and going, "The world doesn't look like what I was taught back home." You know, this isn't right.

BO: Young people are idealistic as they have ever been. I think they are more idealistic now than they were when I was growing up. The difference, though, is that idealism that they feel as if they can channel it outside of governmental structures and outside of politics. The problem is, again we're getting a pretty good lesson in this right now, there's some things we just can't do by ourselves or even groups of us can do by ourselves. As general proposition: we can't build infrastructure by ourselves, we can't deal with a pandemic by ourselves.

On creating a better world for their daughters:

BO: When you and I think about what's the inheritance that we would like to leave Malia and Sasha, more than anything what it would be is that they are living in a country that respects everybody and looks after everybody. Celebrates and sees everybody. Cause we know that if we're not around, that those girls are in a society like that.

MO: Couldn't have said it better myself.

Constance Wu
Constance Wu Says She Was Sexually Assaulted Early in Career: "I Wouldn't Change How I Reacted"
by Monica Sisavat 4 days ago