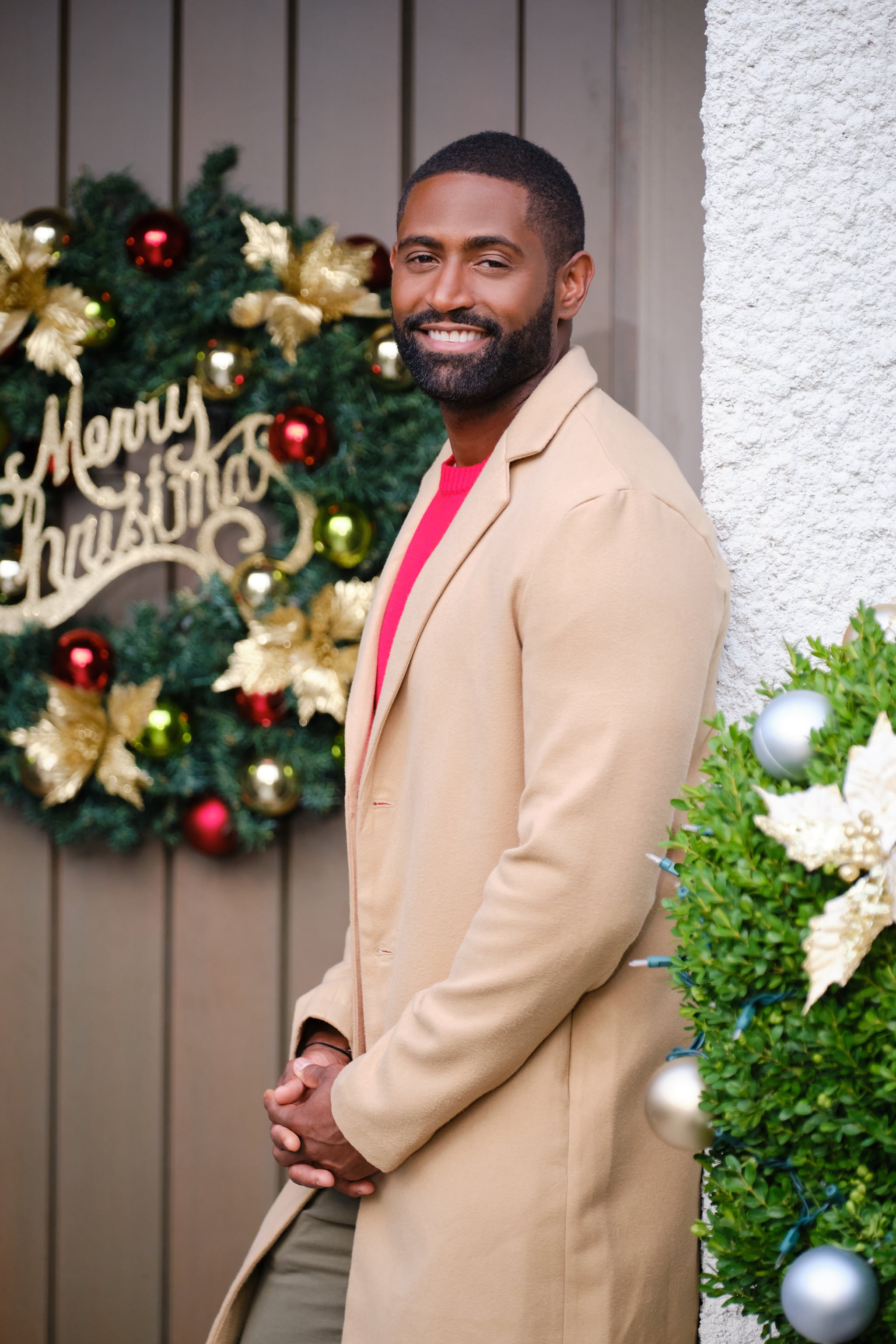 In our Q&A series POPSUGAR Crush, we get to know some of our favorite celebs' more intimate details — from their first celebrity crush to the best love advice they've ever received. This month, we're crushing on Merry Liddle Christmas Baby star Thomas Cadrot.

The holiday season is our favorite time of year, and if you're a fan of Lifetime movies, you're going to love the network's latest Christmas film! Merry Liddle Christmas Baby — the third installment of Lifetime's first-ever holiday movie trilogy — arrives on Thanksgiving weekend, just in time for everyone's holiday binge fest.

Inspired by Kelly Rowland's own Christmas catastrophe, the movie series began back in 2019 with Merry Liddle Christmas, which sparked a heartwarming romance between Rowland's character, Jacquie Liddle, and her now TV movie husband, Thomas Cadrot's Tyler Brooks. The sequel film, Merry Liddle Christmas Wedding, was released the following year, leading us to the third movie's arrival. With the premiere quickly approaching, Cadrot says he's excited for it to finally debut, but the feeling of being a part of Lifetime's historical movie trilogy hasn't quite hit him yet.

"What I look most forward to is the time spent with this onscreen family."

"It's funny because when you say things like that, from the outside it sounds really amazing," he told POPSUGAR. "But from the inside, we're just happy to come back together every single year. To have a reason to all link up and spend 19 to 25 days together shooting a movie that we all love, have fun and laugh together on, and hang together offset. What I look most forward to is the time spent with this onscreen family." Cadrot's big, happy onscreen family includes stars like Bresha Webb (Kiara), Latonya Williams (Treena), Jaime M. Callica (Julian), and Nathan Witte (Chris), just to name a few.

As far as the new movie goes, Cadrot can't wait for fans to see some of the new storylines that are explored this time around. "I think they'll love the heartfelt storylines," he said. "I think the storylines are very close to actually taking from real-life scenarios — things that couples go through, things that whole families go through. I know Jacquie and Tyler's storyline, with a new baby coming in, that's something that a lot of new parents can relate to. Plus, bringing in a new addition to a family that already exists because Tyler already has kids. Then you've got Julian and Treena, who also have their side story [as well]. I don't want to give too much away, but they're going to go through something serious. Then Chris and Kiara have their love story going on. And we can't forget about the kids. The kids add so much sass and energy to this movie."

There's no word yet on whether or not a fourth film will happen yet, but if so, Cadrot already has the perfect couples retreat storyline in mind. "There's so many couples in this movie now, you can take Jacquie and Tyler, Julian and Trina, Kiara and Chris, and Marchelle and Wade. If we want to go shoot this on a remote island, I'm all for it."

Merry Liddle Christmas Baby premieres on Lifetime on Nov. 27 at 8 p.m. ET. Ahead, check out the rest of Cadrot's POPSUGAR Crush interview. 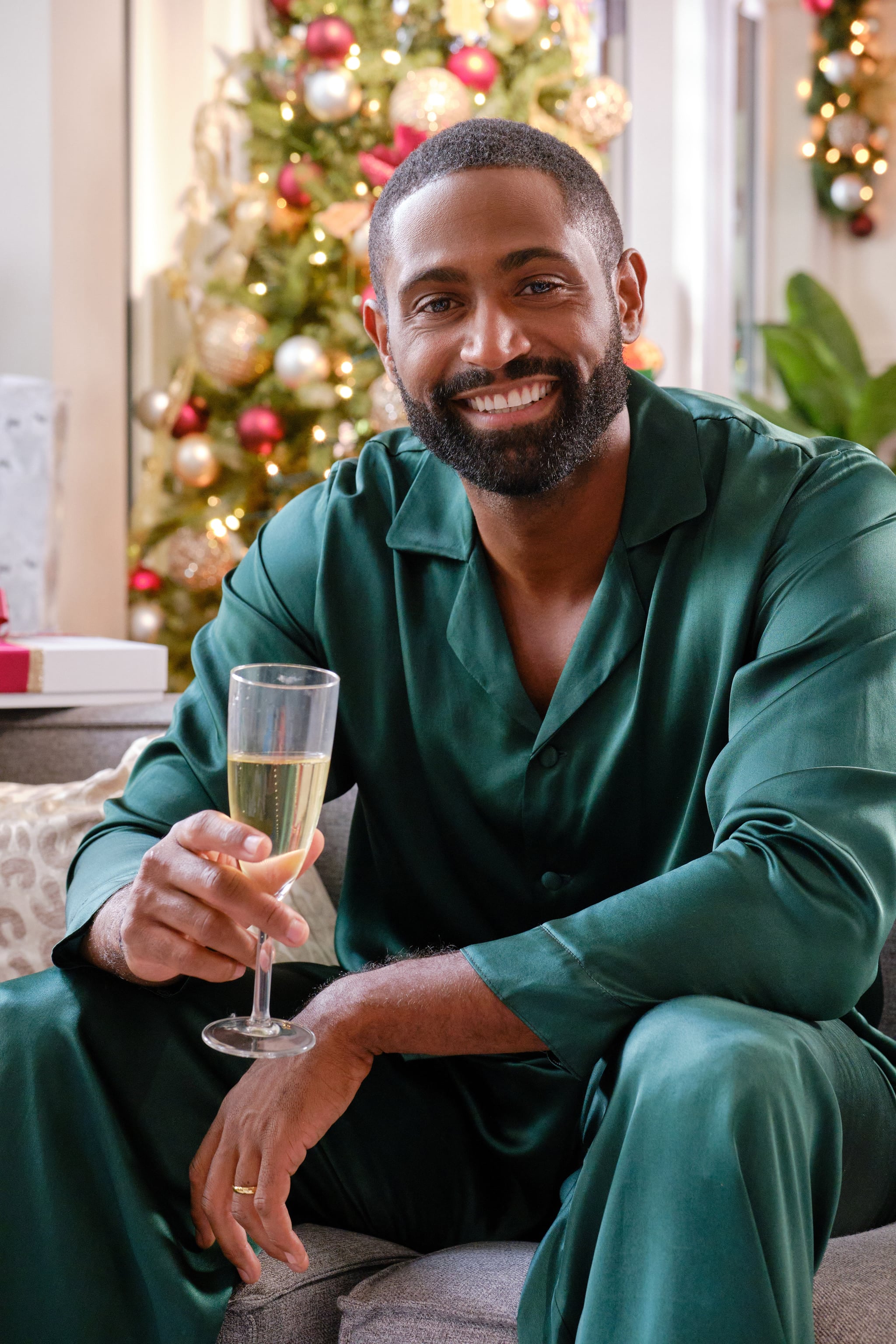 I keep going back to Love Actually every year or A Charlie Brown Christmas.

I think Aaliyah might've been one of my first celebrity crushes.

Do you cook? If so, what's your favorite thing to make?

It's [kind of] a thing. I don't want to lie because I don't want to put myself on the spot if you asked me to cook, but I can say I make some mean eggs and that's pretty much it. I think when I say that I don't cook, I can't just step into the kitchen all willy nilly and cook something up that's really good, but I can follow a recipe.

What's the last recipe you followed?

A beef, rice, broccoli casserole-type thing with cheese. It turned out great. I surprised myself.

What's the best trip you've ever been on?

A family trip to a ski resort, where we rented a big house so that all my nieces and nephews could come with us and everything. It was just like a big family retreat in the mountains in France. That was really nice.

The gym. I can't stress that enough. I just came from the gym actually, it's my place of peace. It usually gets me going for the day and it centers me, grounds me a lot.

It's going to be cheesy but just time with loved ones. I'm not one for material gifts much, but if I can spend time with people that I truly appreciate, that's better than anything.

What's the most romantic thing you've ever done?

Surprise getaways. Just showing up at my partner's door and saying, "Pack a quick bag and let's go. And I'm not going to tell you where we're going until we're there." I can't cook, so I've got to make up for it somehow.

To listen. Not just hear the other person, but to actually listen and take into account everything [they're] saying. Because most of the time we just miss things that have been said and they come as a surprise later on. But it's said in the moment, so just listen. Communication is key.