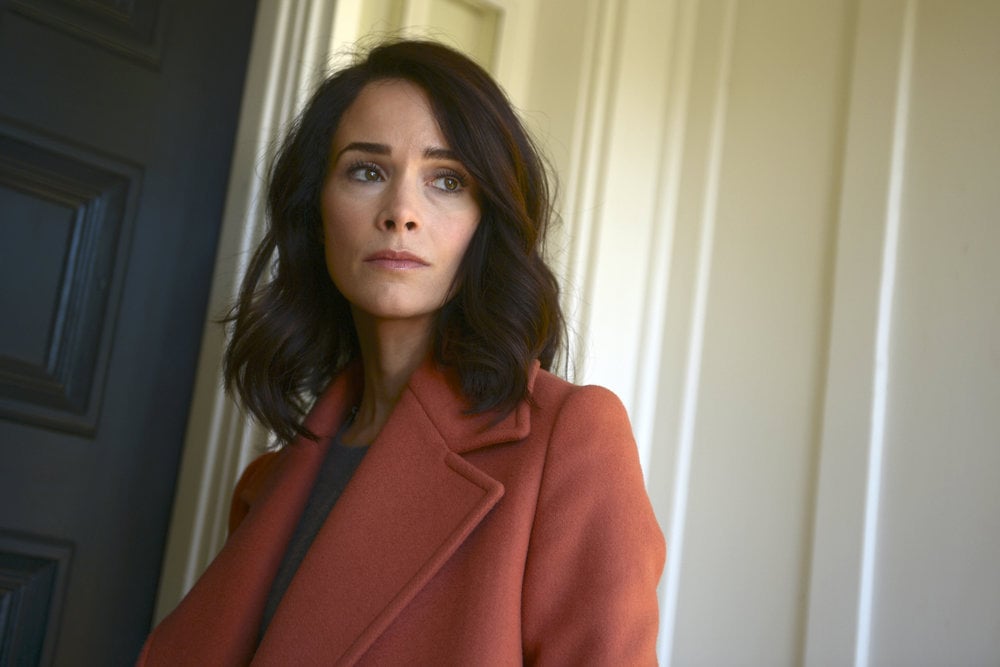 Timeless certainly left us on the edge of our seats during the Winter finale, and this Monday, the show is coming back. After Lucy is kidnapped by Flynn, the rest of the team will do everything they possibly can to get her back — but the rescue won't happen without a few snags. POPSUGAR recently had a chance to sit down with the show's star, Abigail Spencer, and she let us in on some crucial details about the rules of time traveling, the fate of Lucy and Wyatt's relationship, and how Lucy may not be the person we think she is. Keep scrolling as she answers your burning questions about the second half of the season. 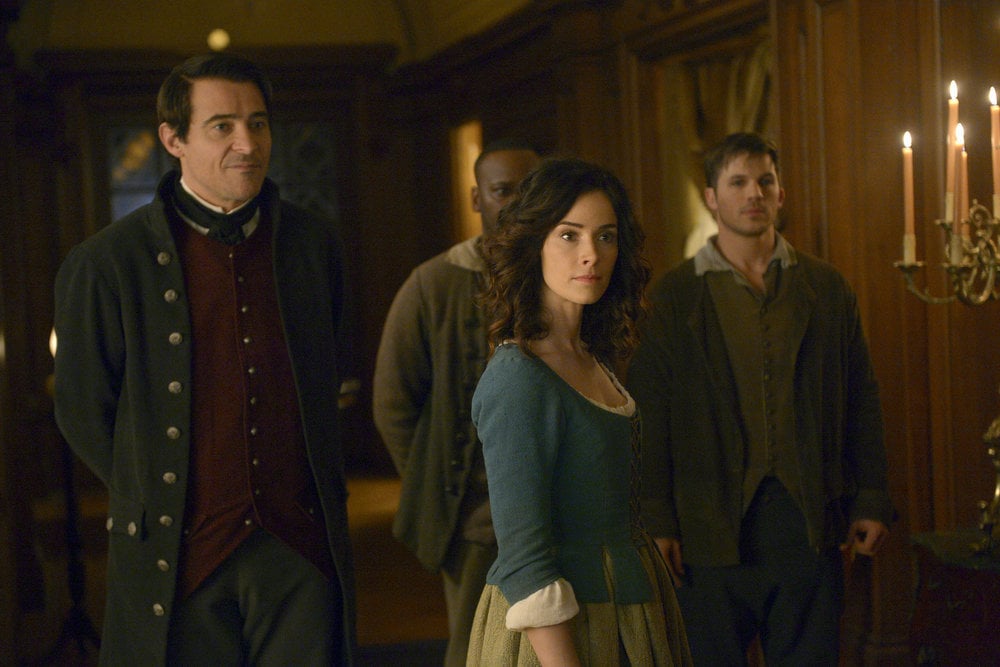 POPSUGAR: A lot happened during the Winter finale. How will David Rittenhouse's death effect the present?
Abigail Spencer: That's going to be part of the journey, trying to figure out what did it effect and what did it not? Lucy is going to make a lot of callbacks to the fact that other people had already subscribed to David Rittenhouse's philosophies and how that will carry on, and also, the fact that his son did not die and how that will carry on. We'll pick back up with that exploration.

PS: How will the team function differently now that Lucy is missing?
AS: Wyatt and Rufus are going to have a very distinct mission, which is get Lucy back. There's still the time travel component of it, but Flynn wants Lucy to go do a very specific task, because now, he's even more ignited. Now that David Rittenhouse is dead, and we come back and find out that not everything has changed, he's even more ferocious about his mission. He really needs Lucy. The episode has a really nice twist.

"[Wyatt and Lucy's relationship] is definitely a slow burn. It takes place over a long period of time and you're very invested."

PS: How will Lucy and Wyatt's relationship be tested this season?
AS: What I really appreciate about the show is that it's dealing with the reality that regardless of what Wyatt and Lucy are starting to feel for each other, Wyatt has a very real thing in trying to avenge his wife's death. He wants to bring her back. So, until Wyatt fully explores that, it's very difficult for Wyatt and Lucy to really move beyond that. And also, Lucy still kind of has this pseudo-fiancé floating around. Both of them have to deal with those things and their personal issues before anything can take place with them. It is definitely a slow burn. It takes place over a long period of time and you're very invested. 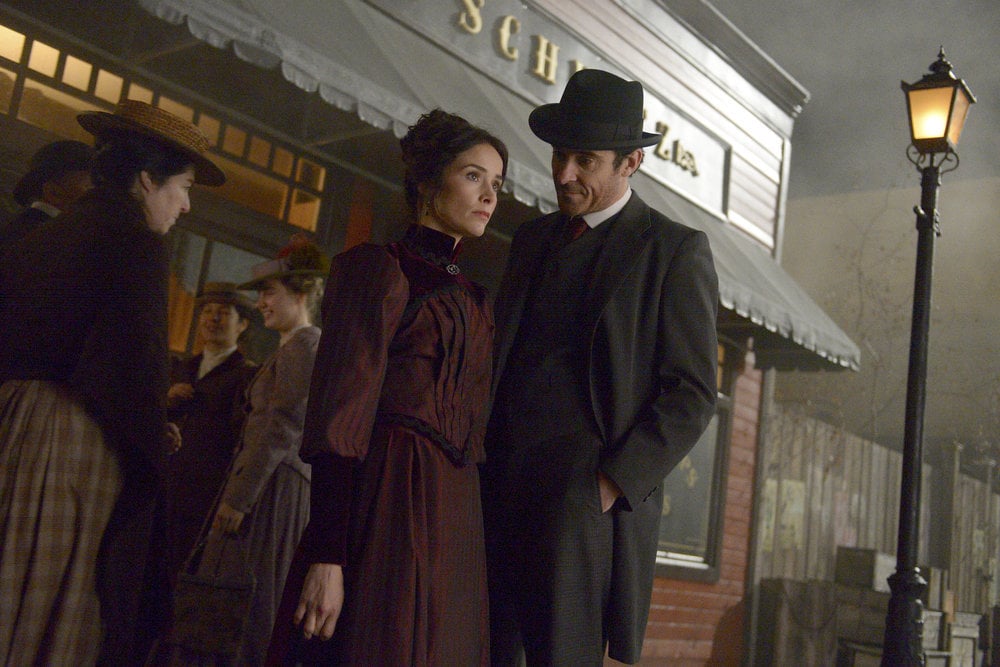 PS: Last season we saw the team work together with Flynn for the first time. Will that change their dynamic now that they've been on the other side of things?
AS: I think so. Flynn and Lucy's relationship is one of the most interesting to me because it's so complicated. I don't find them to be enemies, even though they're enemies. I don't find them to be friends, even though they're friends. They have a connection. It's funny because Goran [Višnjić] and I were talking about it on set yesterday about how it feels familial, and yet it feels romantic, and yet not romantic. It's a really, really interesting dynamic. And it's totally different than Wyatt. I don't feel like anyone is rooting for Lucy and Flynn to be together, but there is something where we're rooting for them to work together and be on the same side.

"I don't feel like anyone is rooting for Lucy and Flynn to be together, but there is something where we're rooting for them to work together."

PS: This is something I've been wondering for the whole season, but with all this time traveling and changing the present, is it possible for one of the main characters to come back to a reality where they never existed?
AS: Here's the thing, I think anything is possible. We have some really, really simple rules, but what's great about rules is when you can break them. So, I'm looking forward to why, when, and how those start to get broken. But I really feel that season one is all about establishing rules. We have to introduce Rittenhouse, what is Rittenhouse, who is a part of Rittenhouse, who are our characters, and who is Lucy Preston? The back six episodes are really uncovering and exploring that because what we may find out is that she's not who we think she is.

PS: What other eras will the team travel to and which historical figures will we meet?
AS: We have some really amazing guest actors coming up. In the first episode back, we meet Houdini at the Chicago World Fair, and he's played by this wonderful actor named Michael Drayer, who I just adore. And then, we go to when Jesse James was alive and we meet Bass Reeves, who the Lone Ranger was based on, and what you find out is that the Lone Ranger was actually black and they never reported that in the documents. And then after that we go to the '80s. 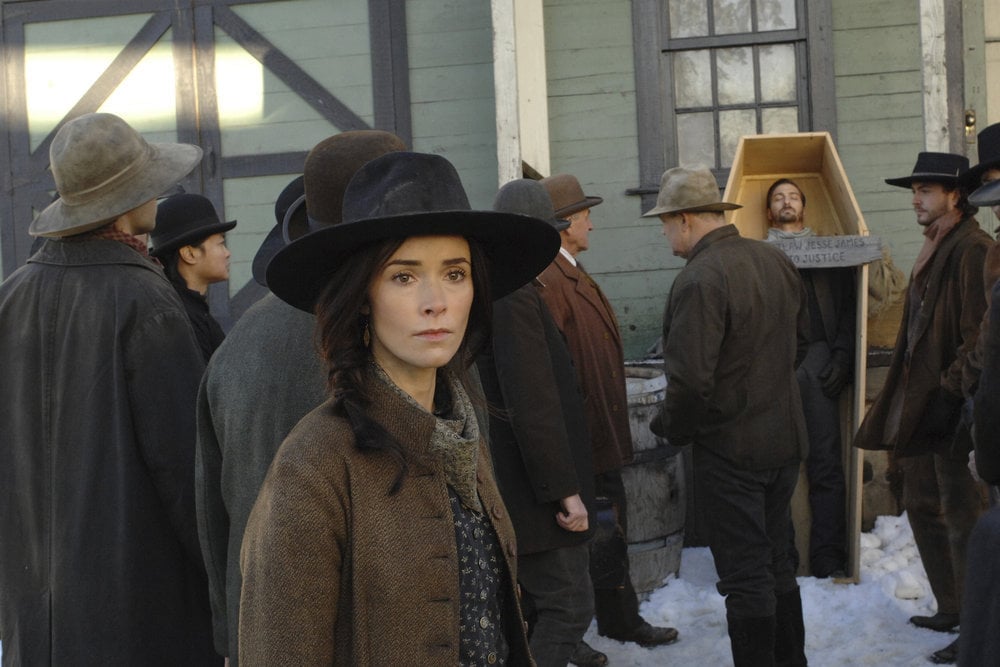 PS: What was your favorite episode to shoot, so far?
AS: It's tough, because what I find about the show is that every episode becomes my new favorite. It's a completely new era, a completely new costume, and for me, completely new hair and makeup. Every time that I walk on stage, they call me "the woman of a thousand faces" because I look completely different. Right now, we're shooting 1927, Paris and the makeup and hair is pretty to-die-for. It's hard because when I was doing the Jesse James episode, I was like, "oh, this is my favorite," because it was Western and really rugged and handsome, but now I'm in 1927 and I'm like, "oh this is my favorite episode," because we meet Hemingway and Lindbergh and Josephine Baker. I will say, it's hard to beat 1927, Paris.

PS: Which celebrity would you love to make a guest appearance and which historical figure would you like them to play?
AS: I would love Tatiana Maslany to come on and play Lucy, because she's so amazing. I would love to see what she would do with it. Or, you know what, I would love Leslie Odom Jr. to come on the show. I don't know who I would want him to play, but I want him to come on. There are just so many moments in history that we haven't explored yet, but he has to come on the show and he has to play some incredible unknown singer from the past.

PS: Or he could just play Aaron Burr.
AS: Oh my gosh! Leslie Odom Jr. comes on and plays Aaron Burr.

PS: And then, it's the musical number of the season and everybody sings.
AS: There you go. And then all of a sudden, we're like My Crazy Ex-Girlfriend and we have a hybrid of La La Land.

TV
Ginny & Georgia: Who Is Austin's Dad and Where Is He? (Assuming He's Not in Azkaban)
by Kamrun Nesa 1 hour ago

Hulu
Get Excited, Because Love, Victor Season 2 Finally Has a Release Date
by Kelsie Gibson 2 hours ago

Netflix
Ginny & Georgia: The 5 Biggest Revelations About the Family's Shady Past
by Kamrun Nesa 2 hours ago

TV
Before You Subscribe to Paramount+, Check Out Its Library of Upcoming Shows and Movies
by Amanda Prahl 3 hours ago