Stephen "tWitch" Boss isn't the only Magic Mike XXL star who has to ban family members from seeing the sexy movie — returning star Adam Rodriguez (who plays Tito) is also not letting his grandmother see the sequel, due to a traumatizing experience she had with her girlfriends seeing the first one. The star also opened up about costume choices he loves to wear (his mesh tank) and what he hates (that thong, tha thong thong thong) and what else we'll learn about Tito in round two. 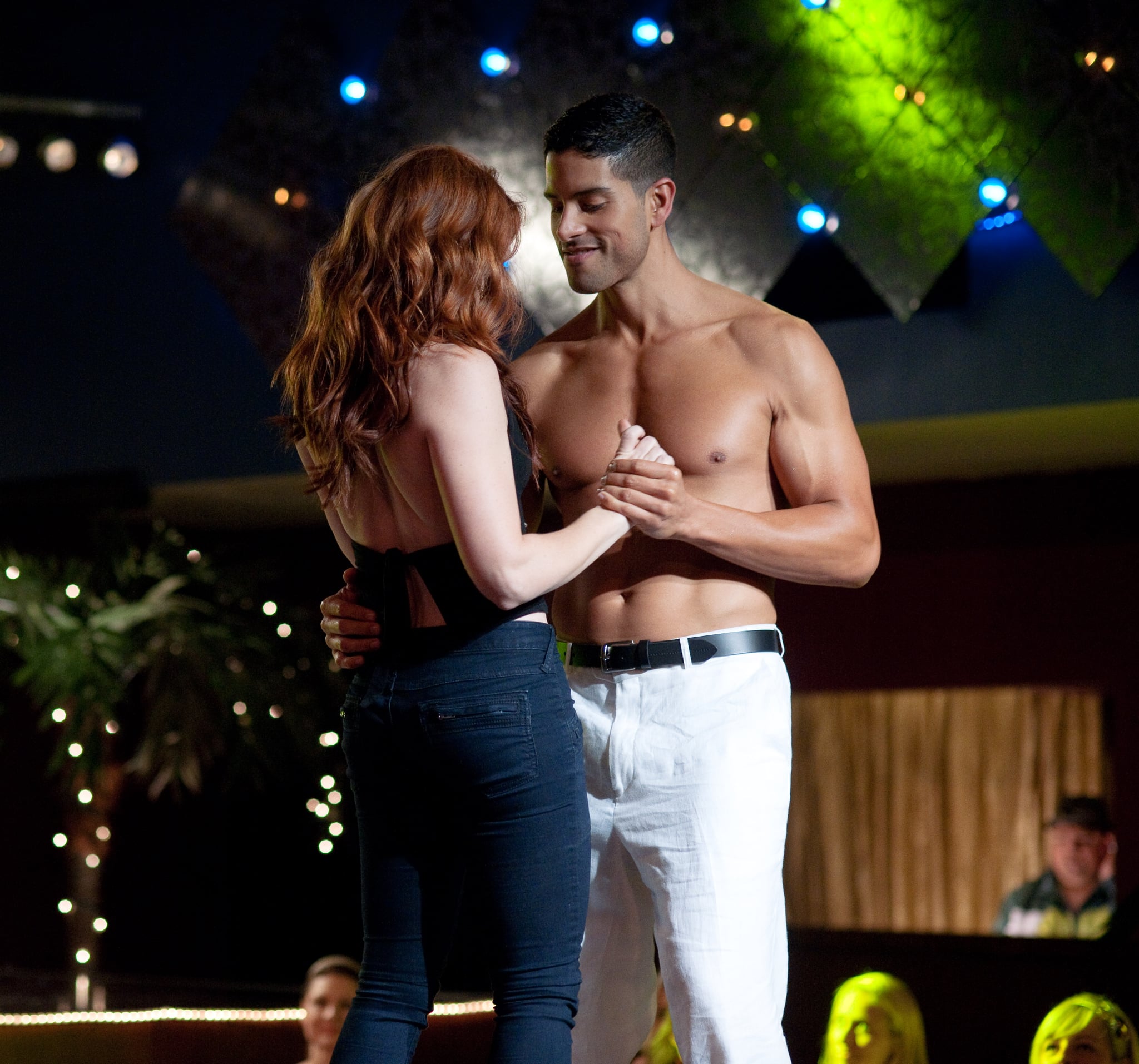 What do we learn about your character this time around?
Adam Rodriguez: In the first one it touched on the fact that [he] was very entrepreneurial, at least in spirit. I think Tito probably read a copy from Napoleon Hill's Think and Grow Rich and that spawned to these other guys.

You seemed very comfortable performing on set. Did you feel comfortable?
AR: I did. I feel great. Honestly, in a weird way I'm most comfortable up there in the moment. You kind of forget that sometimes because it's so rare you get to be in front of a live audience. And then you get up there and you're doing it and I actually, that was the most relaxed I've been, the most fun I've had in a long time. I'm not going to forget that.

Is there a certain song or music that gets you in the mood to strip?
AR: I mean, I listen to the song I am going to dance to just to really get in that head space, but I listen to some Curtis Mayfield "Right on For the Darkness." It's a song that for some reason just puts me in a certain groove. I think I listened to some Kanye West. I listened to some Kanye West and "Runaway." I think those are the two songs that I probably just kept going back and forth on. I can't remember if there's anything else, but I was definitely in game mode yesterday; like, the music was just background, the focus was there. You're just ready to go. You've waited three months to do this, you've been rehearsing this dance nonstop, and like I said, the dieting and everything else. You just get on such a high once you get out there and you do it and it goes well.

Three months on a routine is full-on. What was your favorite dance move?
AR: That's probably going to be the whole thing when I watch the movie. I will probably be embarrassed by it all. I just love the whole routine. The whole routine was kind of challenging for me this time out — I really learned to love to dance. I always loved moving and whatever my version of dancing was, which was like a simple two-step dance probably, and then we did this first movie, and I had never done a choreographed routine before, and it really awakened this love of dance. I just really discovered an appreciation for it that I never really had before. It's like, oh wow, there's just something so amazing about losing yourself. I understood that with music and sports and acting obviously, but I had never done that with the dance art form. So this time around, I really wanted to do something that was going to be probably a half a notch or a notch higher than what I thought I was capable of achieving.

So when you go to parties now, do you dance differently?
AR: You know, I dance more and probably better. I do have a couple of moves up my sleeve that I didn't have before, so yeah, probably a little differently.

Costume wise, do you have a favorite or something really awkward to wear this time?
AR: Yeah, I wear this mesh tank top a lot in the movie. I mean I loved it because it's something that I would never wear in real life and it was just fun to get it in stuff like that when you're just playing a character, and you're just going, all right, let's see how far we can push this.

What about the thongs?
AR: Trust me: god bless you girls. I know we're packaged differently, but I don't know why you would ever want to wear one of these things. It's awful. It really is. It's so uncomfortable. I actually forgot about it until you just mentioned it.

So it's not uncomfortable right now?
AR: Well, after a while, it's like anything else. I mean, yeah, you know you just get used to it I guess, but it's pretty lousy.

Are there any family members that you don't want to see the movie?
AR: You know, I don't know if my grandmother is going to go see the second one. She went [to Magic Mike] and took a bunch of her friends from the home that she lives in. So she lives in the senior living home complex — and a home sounds so terrible, [but] it's actually a really nice place. She was all excited to take her girlfriends to the movie, and they all went and she just left me a really nasty message after she got out of the movie about why did I let her go see this movie and why did I do that? She didn't like it. She wasn't mad at me, but I think she was a little embarrassed. I don't think she knew what she was in for. I think if one person might not go see it again, it might be her.