Brandy Norwood became a '90s icon with her hit series Moesha and her catchy music, and now she's back and better than ever. With a brand-new show on BET and new music on the way, the talented star is rising to the occasion. We recently had the delight of talking with her, and she told us everything you can expect from her career going forward, as well as indulged her fans with a few nostalgic moments from her past. 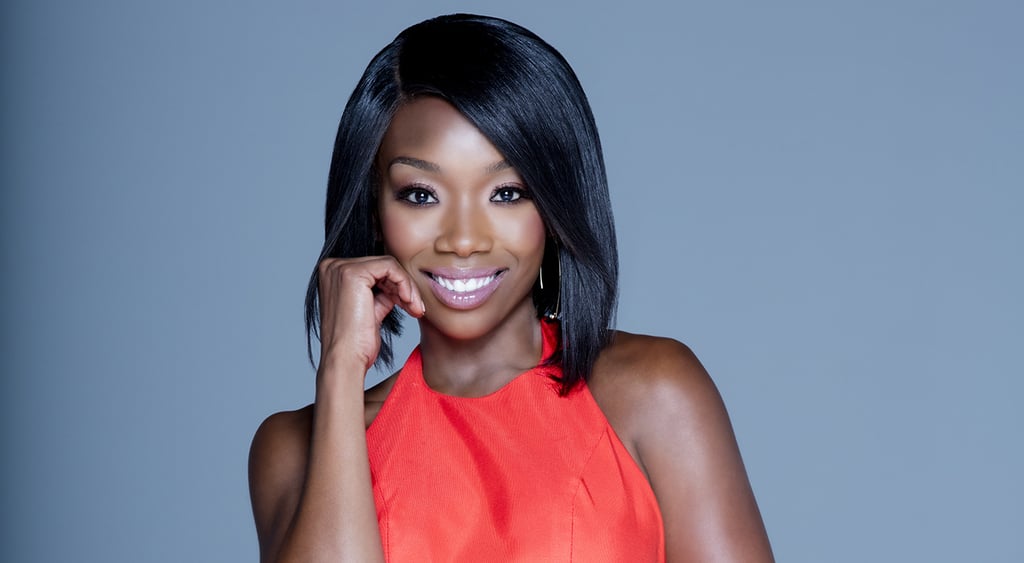 Image Source: BET
POPSUGAR: Your new show, Zoe Ever After, is one of your first starring roles since Moesha; how does it feel to be back on set?

Brandy Norwood: It feels amazing to be back on set. It feels like home, even though the territory is a little bit unfamiliar because it's a new show, it's a new character, but once you get in the groove and you start to settle in and trust the moment, you start to really feel at home. It's a gift and what I'm born to do and what everyone around me with the show is born to do. And to actually trust it and see it all come together, it just feels amazing. And even though designing your own show, that's great, I am nothing without the support around me. The cast is unbelievable. Just really amazing, talented people that make me feel good. We help each other look and feel great and the chemistry is awesome. To me, it's an ensemble. Everyone has their moment to star in their own light. And I'm just happy about that.

PS: You were a '90s icon with your show Moesha; what do you think your character would be doing in 2016?

BN: I think Moesha was so versatile she could've done anything that she put her mind to. I don't know if she would own her own makeup line, I think she would have a firm or something. She would be an incredible lawyer or a judge by now because she was so clear in her perspective and so strong in her stance about what she wanted and she wasn't afraid to speak up for herself. She always had a great argument. I definitely think she would be a kickass lawyer.

PS: How do you think that show would be different if it were set now?

PS: Taking a different direction now, I want to talk about your music. Your new sound has been pegged trap and blues, and I was wondering if you could explain what exactly that is.

BN: My first time hearing that was when folks started calling it that; I never had a title for it. I just went with the feeling and I was able to work with incredible producers and a writer, Kirby Lauryen, who was not afraid to be fearless and try something new and kind of step outside of the box and go with what we were feeling. I think creativity becomes really beautiful and magical when you allow it to do what it's needing you to do. And that's what we did and it turned out to be what "Beggin & Pleadin" is today. It's such an emotional song, just a gut-wrenching story. I love the song, I love the production, and I love the vocals. I'm really proud of it and it feels good to me when I hear it and I was so happy to share that with my following and just with people that don't really know me. I was just so happy that that song was something I could share with someone because I really loved it. And when you really love something it feels even better because when people love it, it's like a fuse. Like you connect and I love that feeling. It just feels like I'm on the right path musically and I'm in the right mindset to continue out my mission in music because I'm not putting myself in a box.

PS: What has been your biggest inspiration for making this new album?

BN: I'm my biggest inspiration. And I say this in the most humble way. I've been through so much, just in my life. I've been through a lot. A lot of ups, a lot of downs. But over the last couple of years, I went through so much. It felt like I lived like four lives in the last three years. I've had to come through a lot and I've made a lot of different mistakes, but I realized that I never gave up. I wanted to so badly. It's easy to just give everything up, but it takes a lot of strength and a lot of willpower to just make yourself stay on it and get up and do something different. And I had to do that. I'm very proud of myself because I have come so close to just giving up and I haven't done that. And my daughter, I can't give up because she's watching and she's here and she's waiting for me to be an example. So, between her, myself, and my will, and me pushing myself, that's my inspiration.

PS: If you could describe your album in one word, what would it be?

BN: Triumphant. In my life right now, in my music, and just overall I feel like I'm winning. It doesn't matter what this person is saying or what the charts are saying or what award shows are saying, the public opinion doesn't matter. I feel like I'm winning in my spirit. So, that's a different type of validation is when you are validating it. The extra opinions and the extra praise is just a bonus, it's not the main thing. The main thing is how I feel about myself. And I feel really good about myself. I love the way that feels. I haven't felt like this in a very, very long time. Musically, professionally, I just haven't felt this good in my life in a long time.

PS: Do you have a favorite track on the album so far?

BN: I don't have a favorite, but I'm proud of all the songs. I'm really listening a lot to "Beggin & Pleadin" because I know that I'm going to have to perform that pretty soon, so I don't want to get out of that box.

PS: Do you have any plans for an album release date yet?

BN: No, honestly I'm just going with the flow. I'm in the process, I'm on the path. I'm really working towards all of my goals and music is definitely on the way.

PS: Because you're always going to be such a '90s icon, what would you say were some of your favorite songs or shows from that era?

BN: All the '90s music. I don't get into the favorite songs thing, because so many speak to different parts of my life, but the music in the '90s is just unbeatable. I was in the gym today listening to '90s stuff and just showing my daughter videos of '90s artists that I loved and who I came up listening to, but Whitney Houston is my idol and my mentor and my dream forever, like she will always be my favorite artist, ever, on the planet. Like I don't think I'll ever feel that way about another artist. And The Cosby Show was my favorite TV show, The Golden Girls and Family Matters. What else did I love? Oh, Full House! I'm so excited for it to come back.

PS: I know, I'm excited too! Also since you mentioned Whitney Houston, I have to say Rodgers and Hammerstein's Cinderella with you and her is literally one of my favorite movies. I've watched it so many times.

BN: Oh, thank you very much. I was just so honored to play the role of Cinderella and to just be the first African-American princess, that's just historic for me, that's such a mark in my life and my career and then the bonus of just working with my favorite person in the whole world, Whitney, like her voice just did something to my spirit. I just couldn't believe it. I dreamt of meeting her, but never in a million, thousand light years would I dream that I was going to work with her and sing with her and laugh with her. It was like I was Cinderella as Cinderella. Like, "Really? Whitney is my fairy godmother?" It was an unforgettable experience for me that I will never forget.

PS: It was impossible!

BN: Yeah! I still can't believe that really happened. And then to be able to share that with my daughter is . . . impossible! I'm really humbled and I'm really thankful for everything that I've experienced.