Yes, there are spoilers for Captain Marvel below. You've been warned.

Although Captain Marvel has been billed as Carol Danvers's big debut in the Marvel Cinematic Universe, the film also functions as an important stepping stone between Avengers: Infinity War and the MCU's final team-up film, Avengers: Endgame. Yes, it takes place decades earlier in 1995, but as we come to discover over the course of the lengthy film, Carol (Brie Larson) will be key to Steve, Nat, and Bruce's plan to bring back the dearly departed friends who turned to dust after Thanos's snap. But as it just so happens, Carol is also the reason why the Avengers are called the Avengers at all. (At least as far as the MCU is concerned.)

At the very end of the film, young S.H.I.E.L.D. agent Nick Fury (Samuel L. Jackson, who has been smoothed down and given hair with the help of CGI) sits down in his office to reflect on the wild few days he's spent with Carol Danvers. In addition to blowing his mind with her nearly unbeatable powers, the human-alien hybrid's past as an Air Force pilot is what inspires Fury to dub his new project "The Avenger Initiative."

He's sifting through photos of Carol's life on earth before she had her DNA fused with a highly advanced piece of Kree technology, and comes across an old photo of her standing with her fighter jet. Along the side of the plane reads her call sign, which is: Carol "Avenger" Danvers. Ta-da!

What's interesting is that her call sign was most definitely not "Avenger" in the comics — it was . . . wait for it . . . "Cheeseburger." 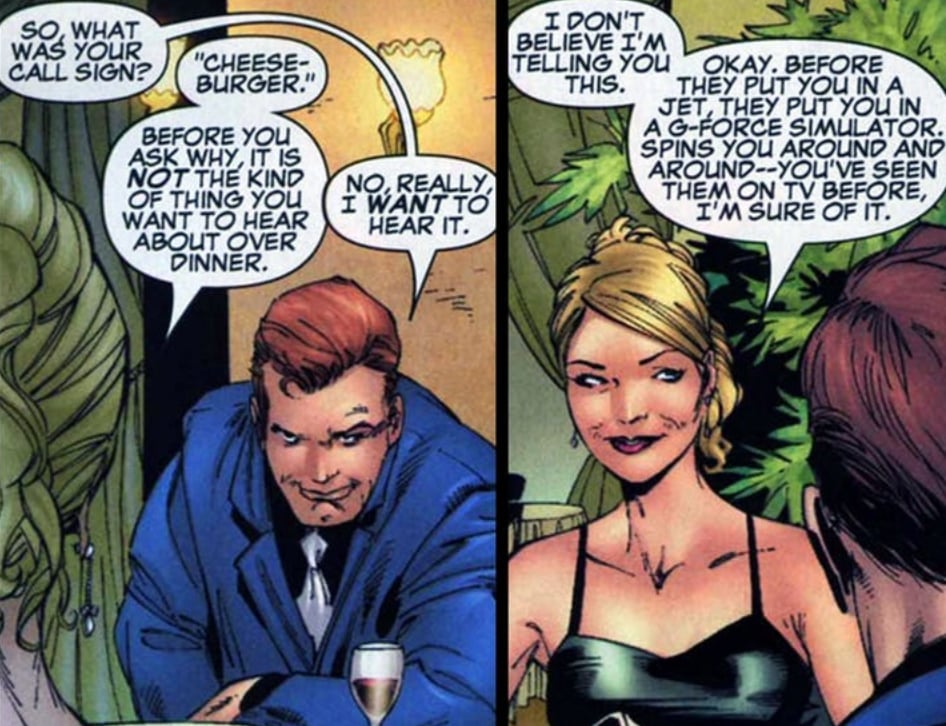 In a 2007 issue of the Ms. Marvel comic, Carol goes on a date and tells the man she's with that her call sign used to be "Cheeseburger." Apparently she earned the (hilarious) nickname after chowing down on a burger right before she endured a particularly stomach-churning session of pilot training, and . . . well, hopefully you can visualize the rest!

Although we kind of wish the MCU was full of superheroes called the Cheeseburgers rather than the Avengers, we can see why Marvel decided to go with the latter.