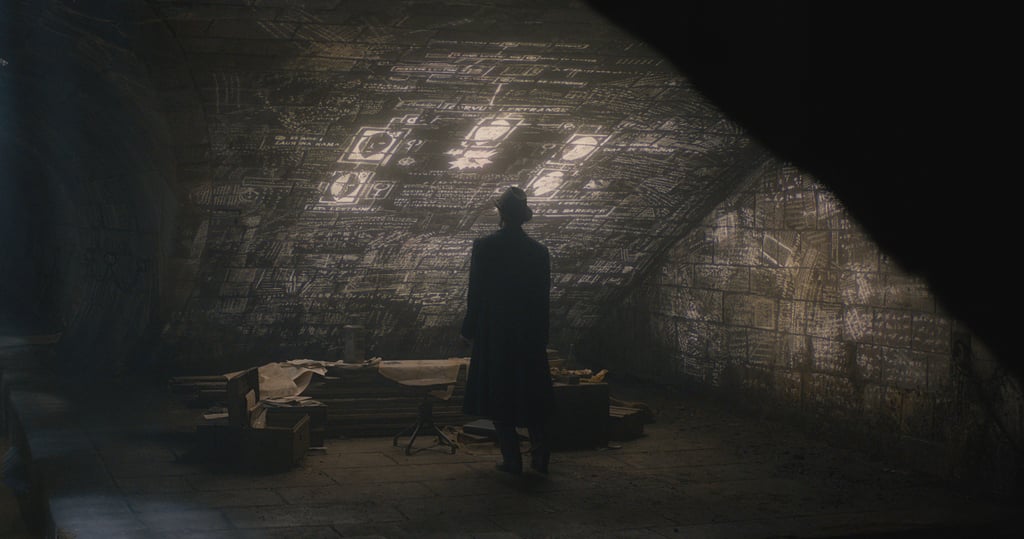 Warning: if we're correct in our theory, the following contains major plot spoilers for Fantastic Beasts: The Crimes of Grindelwald.

If J.K. Rowling and the folks behind the Wizarding world should know anything by now, it's that you can't give hardcore Harry Potter fans like us any hints. Give us an inch, and we'll transfigure it into a mile. Case in point: when the first trailer for Fantastic Beasts: The Crimes of Grindelwald dropped a few months back, it included a split-second glance at a distant chart. We couldn't help but zoom and enhance to read what it contains, and what we found is no small deal — it's a major, far-reaching spoiler about two of the film's most mysterious characters, and it ties them to a few of your favorite faces in Harry Potter, too.

The chart in question is pictured only for a moment while an unknown character standing in a dimly lit room inspects a wall filled with what looks like graffiti. When we zoomed in on the scene, though, we discovered that the writing isn't just nonsense — it's a family tree of sorts, and it connects the tortured Obscurial Credence Barebone (Ezra Miller), whom we have only known thus far as an orphan adopted by an antimagic zealot, to new character (and Newt Scamander's ex) Leta Lestrange. According to the chart, both Credence and Leta are the children of Corvus Lestrange by different mothers, making them half-siblings.

Both Credence and Leta are the children of Corvus Lestrange by different mothers, making them half-siblings.

Whaaaaaaaaaat?! As you might guess based on Leta's surname, she's an ancestor of the unpredictable and cruel Harry Potter antagonist Bellatrix Lestrange, and therefore to Bellatrix's cousins Sirius Black and Nymphadora Tonks. If Credence is her half-brother, that also makes him a distant relative of Bellatrix, Sirius, and Tonks — which, we suppose, means that Credence comes by his pale complexion and dark, shaggy hair naturally.

That's not all we learned from the chart, though. Not only did it contain the major revelation of Credence's true parentage (and the source of his magical abilities), but it also gives a troubling look at potential themes in Fantastic Beasts 2. You see, the chart isn't just a family tree of names; it's a racial profile, showing crude depictions of Leta and Credence's respective races. If you thought that racism in the Wizarding world was focused entirely on magical blood type, it appears that you're wrong — somebody in the world of Fantastic Beasts is also keeping track of skin color, and based on his "pure Wizarding master race" doctrine, we have the feeling his name is Gellert Grindelwald.

So, there you have it: with only a quick scene, we've likely discovered some of the most crucial information that will be unveiled in Fantastic Beasts: The Crimes of Grindelwald. Now that we're sure Credence is, in fact, alive, we're sure that the revelation of his parentage — and his secret half-sibling — will rock him. And considering the additional insights about racism in the Wizarding world, we now have an even more frightening ideas about what exactly the "crimes of Grindelwald" could entail.

Keep reading to see the family tree (and troubling racial illustrations) for yourself, then follow along with more of our coverage of Fantastic Beasts until it hits theaters in November.

Ghostbusters
The "Ghostbusters: Afterlife" Sequel Has a Release Date
by Njera Perkins 11 hours ago