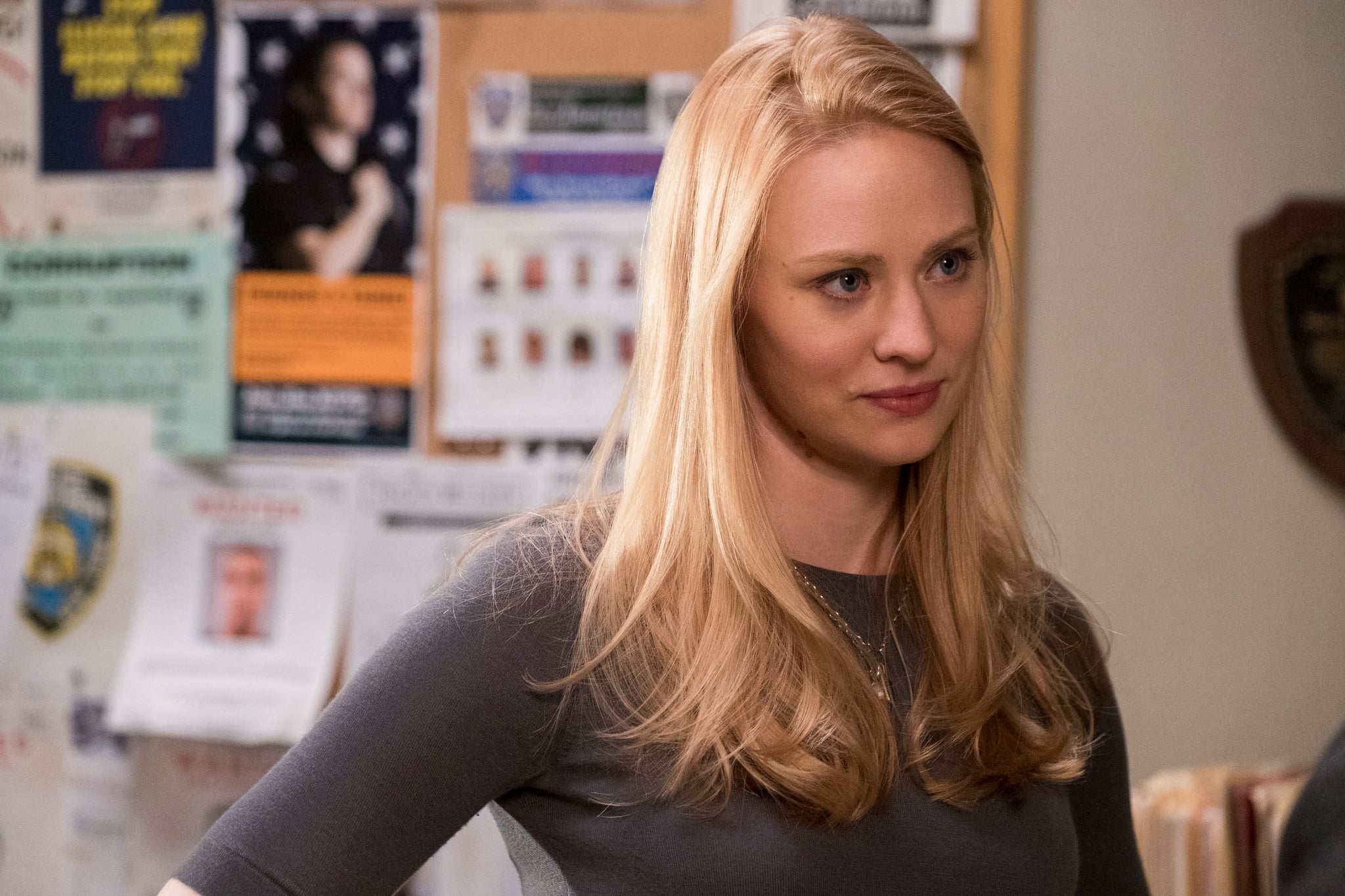 Deborah Ann Woll is one of those actresses who walks on screen and immediately takes over the scene. It's no surprise, then, that Woll — best known as the eternally 17 Jessica Hamby in True Blood — has immediately become one of the most-loved fixtures of the Marvel universe on Netflix. In her role as Karen Page, she's pushed more than one superhero to confront their demons; in Daredevil, she's the voice of reason, in The Defenders she holds the answers, and she does both those things (and so much more) in the year's newest Netflix series, The Punisher. In other words: she's one hell of a badass, and we couldn't love her more.

I caught up with Woll by phone on Nov. 30, and we discussed the evolution of Karen Page, the impact of real life on art, and, of course, what it was like to work with Jon Bernthal. A lightly edited transcript of our conversation is below.

Related:
The Punisher Might Have Marvel's Most Tragic Backstory of All Time

POPSUGAR: What initially drew you to the role of Karen Page?
Deborah Ann Woll: I was interested in Karen from the beginning because she's somewhat mysterious — there's a lot more going on with her than what you see on the surface — and that was something I was really interested in playing since my previous role on True Blood was very much a heart-on-your-sleeve kind of person. It was interesting to play with some secrets.

PS: Who do you relate more to, Jessica Hamby from True Blood or Karen Page in the Marvel Netflix series?
DAW: Both of them — all of my roles. I mean, all of my roles are me — they're just different aspects of me, they wake up different parts of my personality. Jessica was when I was young and in my 20s, and I'm older now. . . so they're kind of reincarnations at different stages in my life, and the different things that matter to me come into it. You'd be amazed how many times something that's going on in my life that I'm dealing with ends up feeling like something I'm working on in my work — whether the writers know about it or not. You just end up bringing parts of yourself to it, whether you want to or not.

PS: Did you grow up reading comics?
DAW: I'm very much a nerd, but that was not my niche. My boyfriend's a huge comic reader, though, so he was almost more excited about this job than I was initially. 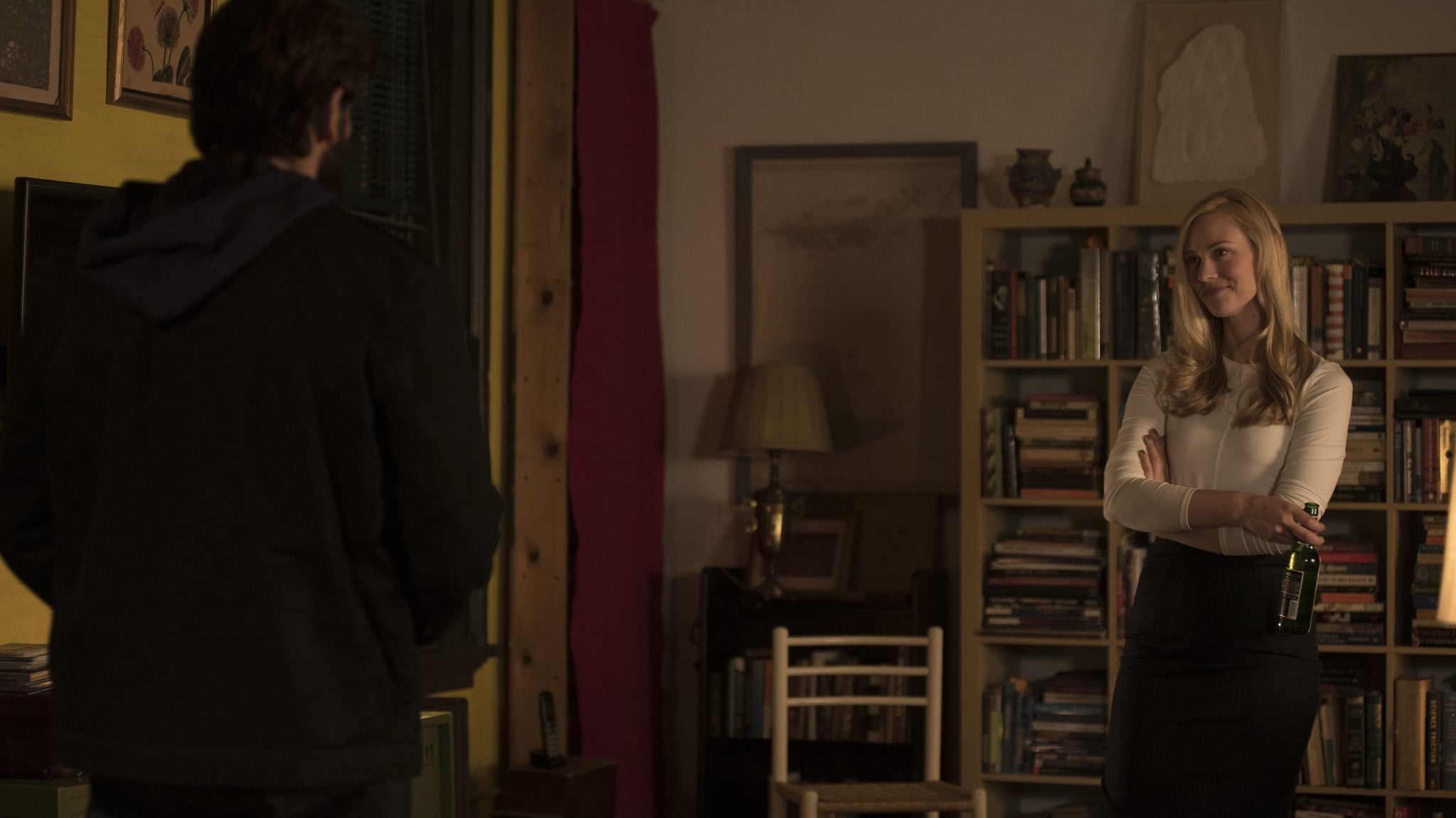 PS: I read somewhere that you were a big cosplayer, is that true?
DAW: Yes and no. I've dressed up in costumes for SDCC a number of times because I actually wanted to go to panels and do stuff — but if I did that as Jessica Hamby, I'd never make it to those panels. So I did a bit of cosplaying there — but really, Dungeons & Dragons is my big nerdy world that I live in.

PS: How much do you think that current events, the political climate, and the things that are happening on a day-to-day basis have shaped all the Marvel series on Netflix?
DAW: I think that as with any art form, you're hoping that communication and dialogue can be a way to process things. None of these shows are meant to advocate for violence — we're trying to depict the conversation as open and complex as it is in real life. There are no easy answers. The Punisher, I think, is a really good example of that. A lot of the issues that are political or social that are brought up in that story are in many ways left unanswered; instead, they're to get people thinking and talking. And we hope that's helpful.

PS: Your character, Karen, is portrayed very differently in the Netflix series than she was originally in the comic books. How do you feel about that?
DAW: I love it. I think that a lot of these comic books were developed during a time period where women characters, in particular, served a different function in stories than we want them to today. So I'm very pleased that Marvel has been so open to allowing us to reinvent the female characters. Karen Page has an opportunity now to represent something bigger in stories. She can represent more than a love interest; she's somebody who's just as vital to protecting New York City as a superhero guy. 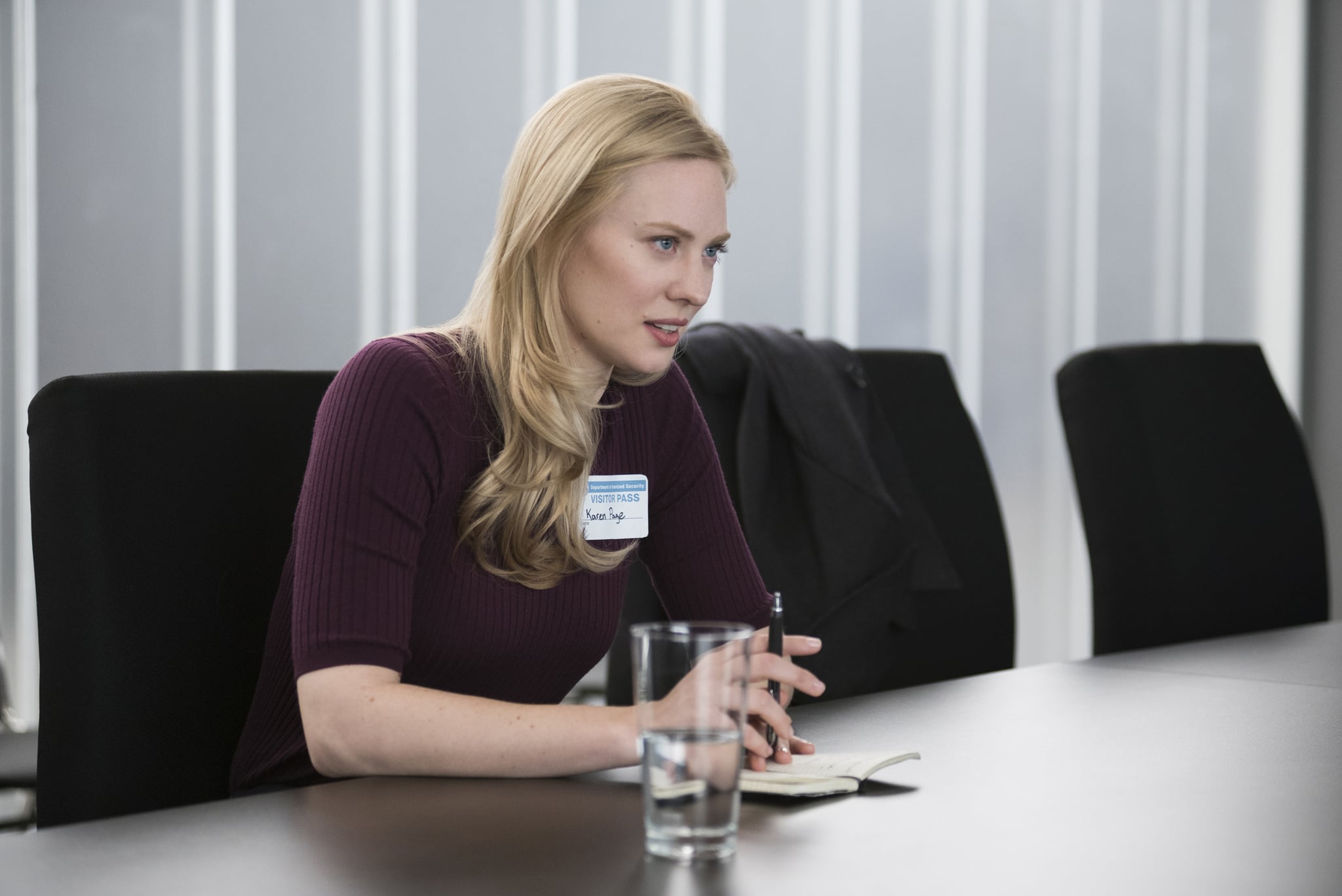 PS: Is there any specific arc you'd want her to explore going forward, do you envision her as being her own separate force from everyone else?
DAW: Yeah, I mean, I love the investigative journalist direction that they're going in. There was a time when they talked about having Karen become a paralegal or becoming a lawyer herself, and I was glad that they didn't want her to fall into something that was someone else's, that was all hers. I love that it came out of Ben [Urich], out of that very strong first relationship that she made with him and that his presence can live on in her. And even in the The Punisher, there's this idea that he had to come to her to get information and that without her he couldn't have done what he needed to do. They need her. They need information. I appreciate that they've allowed us the freedom to give her more agency, become her own woman.

PS: How do the experiences of shooting Daredevil and shooting The Punisher compare?
DAW: The style is different. The Punisher is more of a realist work, for lack of a better word. So the acting style — there's less to be awed about. So much of Daredevil is like, well, if we're going to play this honestly, the things that we're seeing here are incredible. With The Punisher, it's a much more of a starkly realistic almost sad kind of portrait. It brings a different feeling to the work.

PS: What was it like working with Jon Bernthal?
DAW: He's wonderful. I love him. I feel a lot of affection for him — he's very intelligent, he has such a mind for logic, character logic, and story logic. There were times where, you know, it's easy in storytelling to kind of get swept up in "oh, this moment is so great, it's so interesting and complex and weird," and he'll be like, "yeah, but why?" And if you think about it for more than two seconds it's like, "yeah, why?" He's really good at maintaining the integrity of a character in a story, and I'm so grateful for that every single time. He's an intense performer, but he's a joy and a pleasure to be around. He's very collaborative and open and supportive — you really couldn't ask for much better. 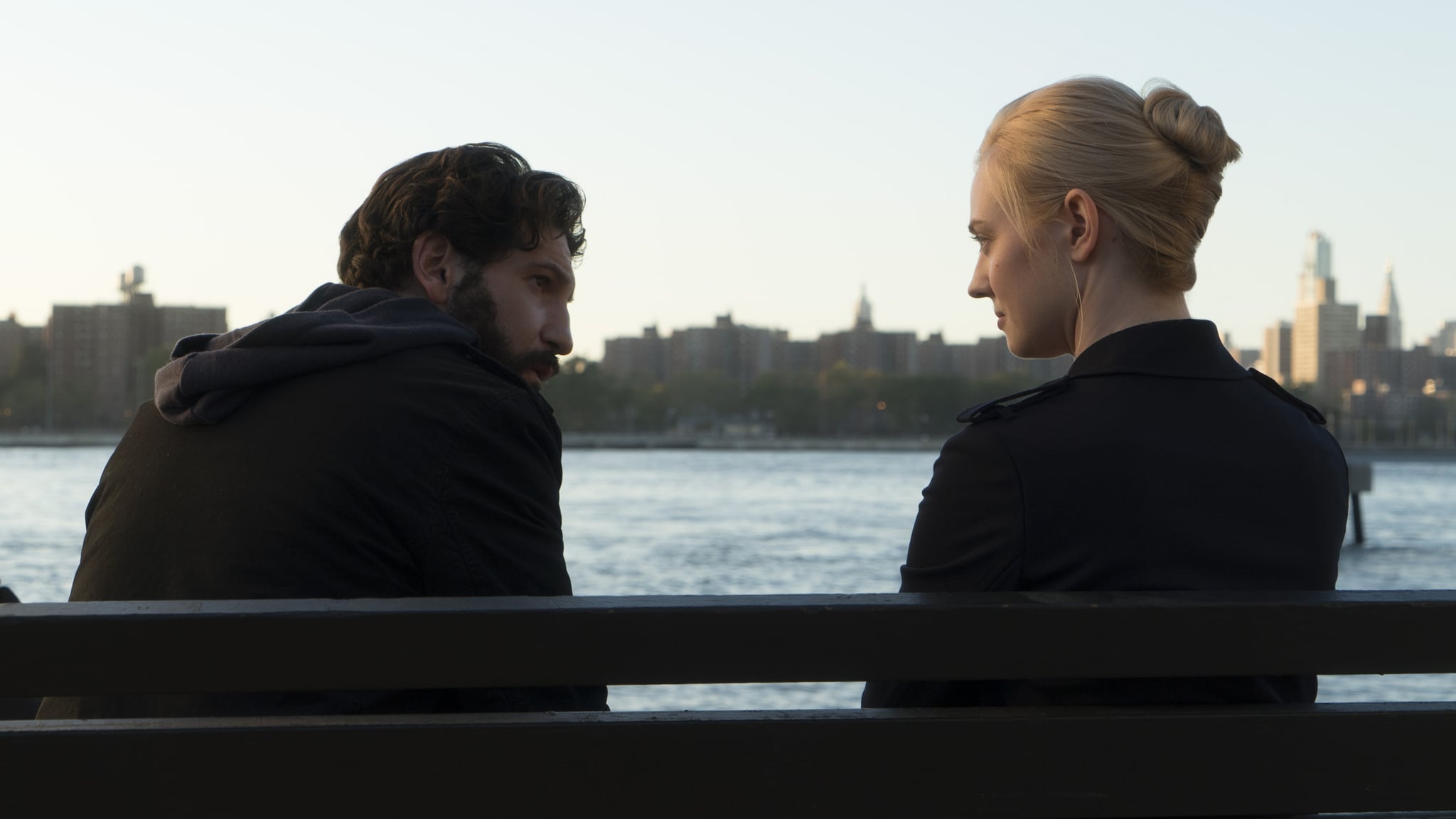 PS: What do you think your favorite moment has been in working on these shows so far? You can have more than one, don't worry.
DAW: In the first season [of Daredevil], I loved the scene with [James] Wesley. I think Toby [Leonard Moore] is such a fantastic actor, and most of it was him giving his monologue, but I loved it because it revealed that there was more about Karen than we knew. It was the reason why I agreed to do the project when they offered me the part. I spoke to the execs about it, and they told me that that was the plan and that was what sold me. I was like, "OK, so this is someone who has something going on."

[In The Punisher] you know, I gotta say that scene with Jon by the bridge at night. I love that scene. It rolled off our tongues. It was just really easy. I love the questions that are asked in it, I love that they challenge each other. They don't let each other get away with any kind of simplifying of the situation. And I think Karen asks the questions of Frank [Castle] that we all want to ask, which is, "where does this end?" and "how many people do you have to kill before you're happy again?" And his answer is "maybe never," and that's a terrible but honest thing to know — I think it was just an interesting, complex scene.

PS: If you could give one message to POPSUGAR readers, as a woman in Hollywood and with your experience in these roles, what would it be?
DAW: I think it would be "Hey, be a Karen Page. Be a little pushy." That doesn't have to be an unattractive quality. Stand up for yourself, ask for what you need to do your job — I think I wasted a lot of time thinking "I can't ask for help" or "I can't bother anyone else" and "I just need to be amenable and easy to work with." But at a certain point, you do need something like. . . a script a day before you shoot. And if you have to get on someone's butt and make them give you what you need to do your job well, then that's an acceptable form of being pushy. Yeah. Be pushy like Karen Page.

Netflix
Netflix's Ratched Takes Place in Lucia, CA, but the Depiction Differs From the Real-Life Town
by Brea Cubit 1 day ago

Netflix
Wondering Why You Recognize That Scary Music in Ratched? It's Pulled From a Classic Thriller
by Hedy Phillips 14 hours ago