There's no doubt about it: The Lion King's new live-action remake is visually stunning. But just because a movie can be remade doesn't always mean it should be remade.

The 2019 CGI version of baby Simba is adorable, and I can't deny that Beyoncé's Lion King album, The Gift, is incredible. And yet, it doesn't come even close to edging in on the 1994 Lion King's special place in my heart — not only because it's a Disney classic, but specifically because of its unforgettable 2D animation. Despite all the bells and whistles of Jon Favreau's updated take on the Hamlet-inspired story, something about it just feels . . . hollow.

Considering that The Lion King came out before I was born, I wouldn't be surprised if it was the first movie my parents slid into the VCR for me to enjoy as a baby. (At the very least, it would explain my love for animals and my obsession with cats as a child.) To this day, when I hear the opening notes to "Circle of Life," I can instantly picture the orange-yellow sunset view from Pride Rock, and the antelope grazing on the grass that blows gently in the breeze of the savanna. I can vividly see the juicy grub Timon picks off a mossy log when Simba says he's hungry, and hear the crunch that follows as he takes a bite. I'm flooded with memories of the hyenas cackling in their green-tinged hideout, the dust billowing up from the ravine as the wildebeests charge away from danger, and the look of heartbreak on Simba's face when he realizes that Mufasa is dead.

This is all to say, the original 2D Disney film didn't leave me wanting for more when it came to animation or visual details, as old-school as they now may be. In fact, from a very young age, I considered The Lion King to be a cinematic masterpiece all around, so when I heard Disney was creating a CGI remake, I wasn't sure how to feel. I know I'm not alone in saying that, as beautifully detailed and realistic as they are, the CGI versions of the film's characters are difficult to think of in the same way as the originals. The new design for Scar, specifically, has been criticized for being a bland take on the villain's OG design. Making matters worse is that the digitally rendered characters aren't nearly as expressive as their 2D counterparts in the first film.

For instance, in the 1994 version of The Lion King, the characters' eyebrows move as they talk; their mouths twist into smiles and smirks and mischievous grins to express humor and understanding and fear. Simba's face is confident, and at times arrogant, while Timon and Pumbaa wear carefree expressions that communicate their silly yet trustworthy nature before they even open their mouths. Scar's eyes widen and squint and glow an unnatural green to convey his underlying thoughts and motives. It's these simple yet crucial movements and expressions that signal intensity and drama and joy.

This lack of expression is especially noticeable in the 2019 film when Simba and Nala reunite after years apart. Nala, in search of food for the pride, hunts Simba down, looking about a million times more fierce and threatening than I remember, and the pair wrestle until they finally recognize each other. Even once she realizes she's found Simba, their play fighting feels more like watching a nature documentary than a Disney movie, leaving me worried that they're accidentally going to hurt each other. It's almost exactly the same scene, but it's emotionally tangential from the original because it's missing those essential facial cues and the playful body language that the first film gets across so well. 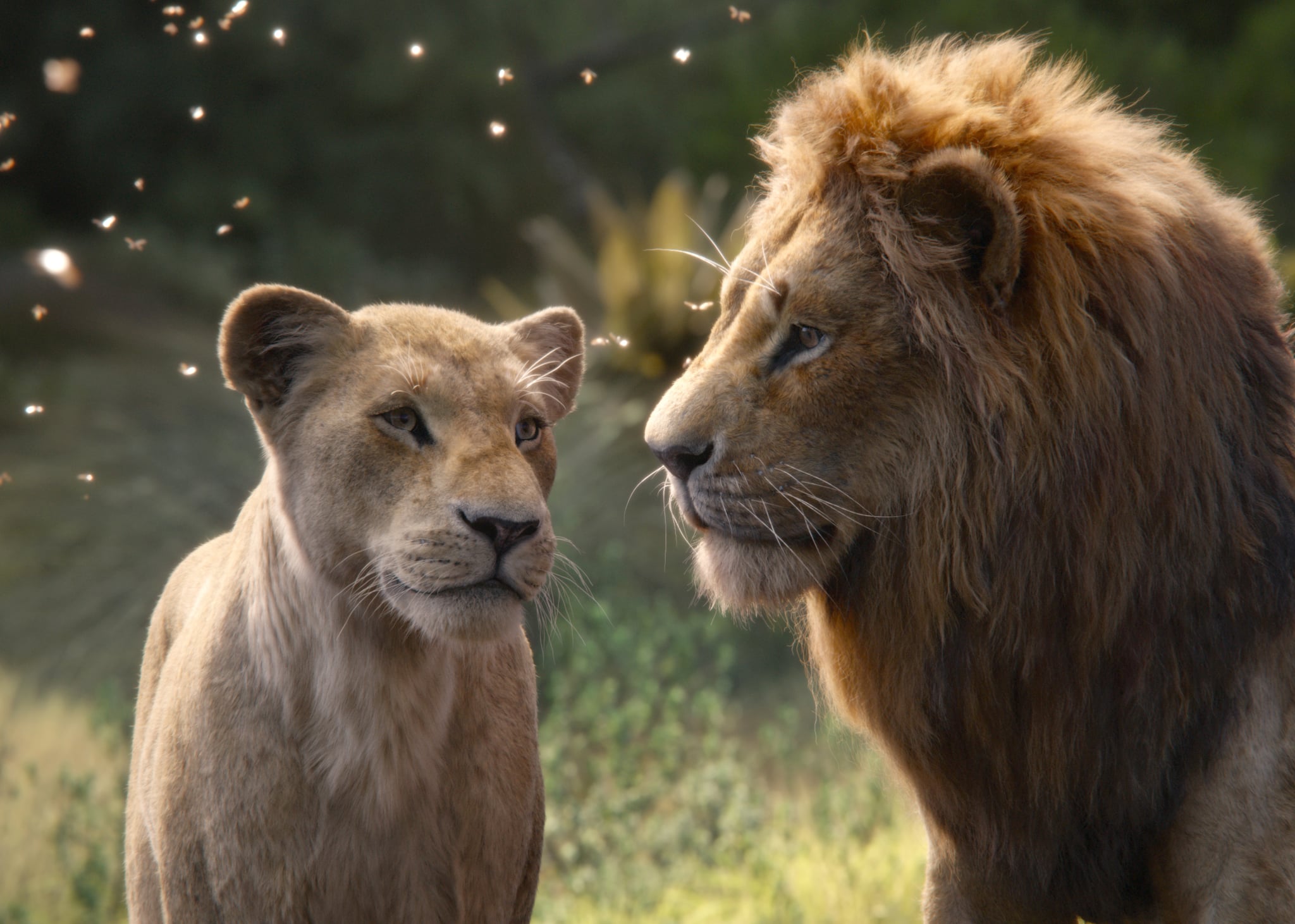 While the reboot is proof of just how far we've come with animation over the last few decades — enough to make cartoons look like hyperrealistic animals, giving the impression we're watching Planet Earth rather than a Disney classic — that doesn't necessarily make it better. The bright colors, emotive characters, and lighthearted nature of the original Lion King film evoke a kind of happiness in me, and many people who grew up watching the movie, that just can't be matched.

Even watching Timon and Pumbaa sing "Hakuna Matata," minus the tail wagging and swinging from vines, just doesn't have the same spark. The newer animation, while crystal clear and far more realistic than the original, makes the dynamic duo feel less approachable and even a little too realistic. (Sorry, Pumbaa.) If it weren't for the voice acting, I wouldn't even know how any of the characters are feeling, and at that point, the animation isn't really fulfilling its purpose.

Where's the fresh perspective that makes me reconsider everything I thought I knew about one of my favorite childhood movies?

All in all, the CGI animation takes away from my personal connection with the characters and made it difficult to discern the tone during some of the movie's most iconic moments. The 2019 reboot follows the exact same storyline as the original, and it replicates all of the 1994 film's most iconic scenes, so it just doesn't seem necessary for it to exist without the addition of some sort of distinguishable twist. Where's the missing scene I've been waiting almost 25 years for? Where's the fresh perspective that makes me reconsider everything I thought I knew about one of my favorite childhood movies? Where's the new line that hits home in a way the original never even dreamed of doing?

I'm not saying classic Disney movies should never be transformed into live-action reboots, because I've genuinely enjoyed the studio's previous live-action outings, like Maleficent and Alice in Wonderland. However, it's worth pointing out that both take the original story and add a major twist or a new perspective that the original doesn't have.

Even the live-action Beauty and the Beast, with its captivating attention to detail, couldn't capture the same whimsy as the original. Yes, the Beast's home is extravagant in its design and every element of the castle, from the crystal-covered chandeliers to the delicate red rose, is crafted in such a way that it makes me feel like I've actually entered the home of a royal. But Mrs. Potts has lost her rosy complexion and endearingly round cheeks; Chip has lost his softer features that indicate he was once a child; and the Beast himself is outright terrifying in some scenes, stripping him of all warmth. Granted, he's meant to freak us out a little, but not so much that it stops feeling like a Disney movie.

Guy Ritchie's 2019 version of Aladdin faced similar struggles. Sure, the detail and movement of Jasmine's jewels and outfits are dazzling in the live-action remake, but they're not enough to distract from the uncanny valley appearance of Will Smith's Genie, or make up for the loss of the unbridled comedy and lively, swirling colors of the 1992 original.

Related:
Why These 5 Memorable Lion King Scenes Need to Make It Into the Live-Action Reboot

Simply seeing these cartoons from my childhood in a more realistic light isn't remarkable enough to justify remaking entire films. If there's no significant change in perspective or to the plot itself, then what's the point of rebooting a movie at all, CGI or not? I don't need to see the exact same story redone with new animation just because it's new, especially when the originals leave me raving about their animation over 20 years later.

So, no, I don't think all of our favorite Disney movies need to be remade. The reboots so far, The Lion King included, are visually amazing and do make me smile, but never in the same way as when I see Simba's bright yellow fur or Scar's venomous green eyes or the clearly cartoonish sunset that still somehow leaves me with chills. It might be the nostalgia of it all, but there's something about the classics that just sticks with you.

Reese Witherspoon
Melanie Lynskey Is in Touch With Some of Her "Sweet Home Alabama" Children: "Very Cute, Sweet Kids"
by Eden Arielle Gordon 7 hours ago