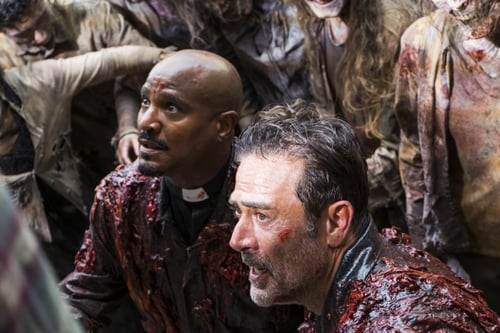 Warning: spoilers for The Walking Dead ahead.

Father Gabriel opens The Walking Dead's "The Big Scary U" episode Sunday night with a prayer: "You've given me redemption," he prays, "and it's that redemption that makes me no longer fear death."

There's definitely a big reveal involving Father Gabriel at the end of the episode, but it's more complicated and uncertain than the opening scene implies. POPSUGAR spoke to Father Gabriel himself — actor Seth Gilliam — to get some insight on the episode.

"Uh, he's sick," Gilliam said with a laugh when asked whether Father Gabriel was turning into a walker in that final scene. "That's as far as I can go."

Related:
The Walking Dead: Daryl's Angel Wings Are More Significant Than You Think

Father Gabriel spends most of the episode with Negan, confined to a trailer that they retreat to after Rick & Co.'s attack on the Sanctuary a few episodes back. The trailer is surrounded on all sides by walkers, and Father Gabriel and Negan spend much of the episode in there trying to figure out whether the walkers or each other are the bigger danger.

"We were shooting in an actual trailer, so it was very tight quarters," Gilliam said. "It also got exceedingly hot in there, and we were already wearing hot costumes."

Gilliam said he enjoyed watching Jeffrey Dean Morgan turn on the bravura and become Negan: "The character is charming to begin with even though he's a psychopath, and Jeff taps into that charm very seamlessly," Gilliam said. "It's a little unnerving, but the fun of acting is seeing people transform in front of your eyes. He can tell you a fart joke and 30 seconds later be threatening your life. It's fun stuff."

Related:
Why Did Rick Snap That Polaroid on The Walking Dead? Here's Our Best Guess

When the walkers are beginning to burrow into the trailer, Father Gabriel and Negan decide to make their escape by draping themselves in walker guts — a trick we've seen before on the series — to mask their scents and make them more or less invisible to the flesh-eating walkers. The walkers swarm them, there's an in-episode cliffhanger where walkers are collapsing onto them, and it's not entirely obvious whether Gabriel has been bitten.

Characters who have been bitten by walkers without getting killed in the process go through a flu-like sickness that can take minutes or hours before "turning" them into walkers. At the end of the episode, we see Gabriel on the floor of a cell at the Sanctuary looking like he's just eaten a plate full of rotten shrimp.

If this is the end for Father Gabriel, we'll almost certainly get to see him at least one more time. If he's turning, he's not turned yet.