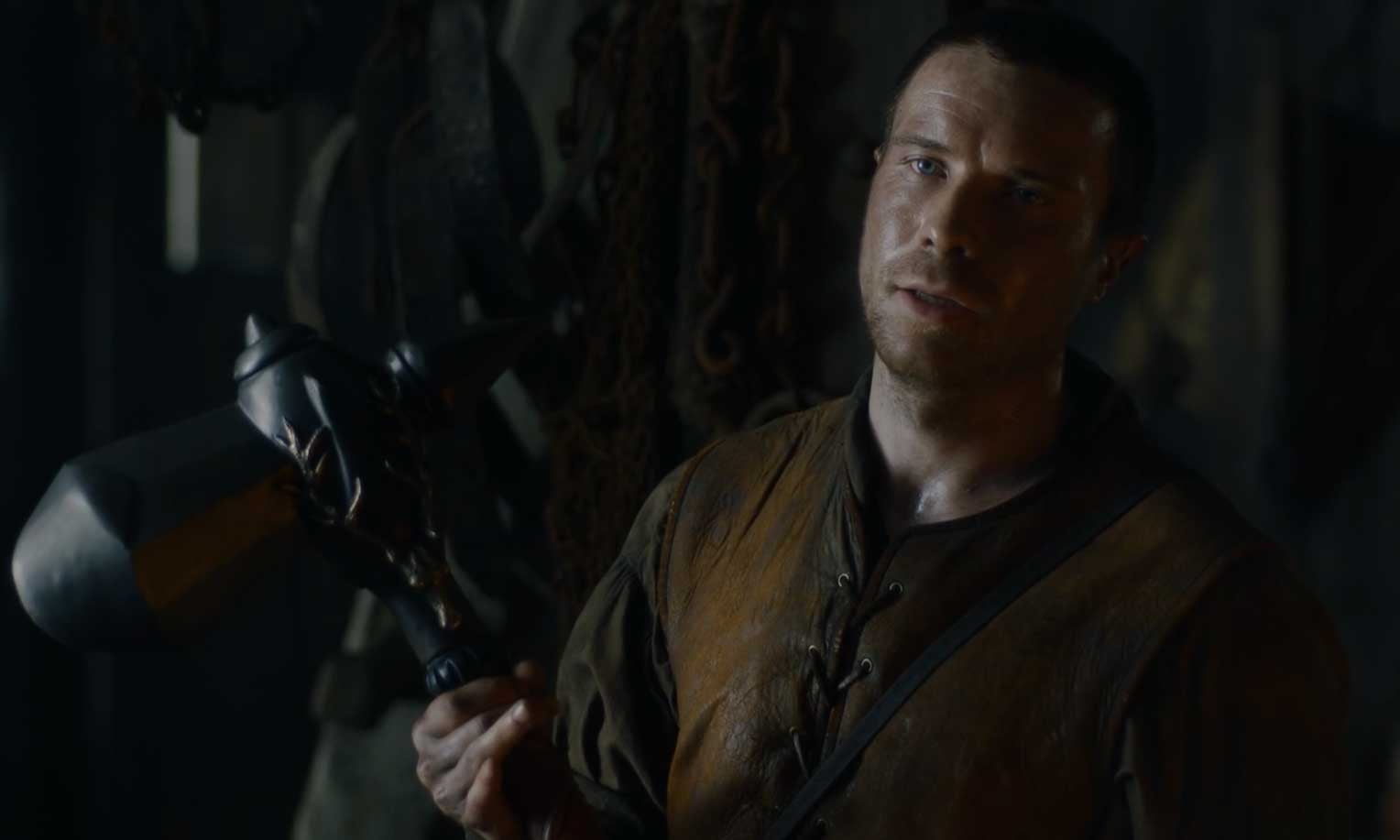 On Sunday's Game of Thrones, Ser Davos Seaworth takes Tyrion to King's Landing for a parlay with his brother, Jaime, but Davos has another errand in mind while they're there: running to Flea Bottom real quick and picking up Gendry, the last surviving bastard of Robert Baratheon, to come fight for Jon Snow in the war against the Night King. When Ser Davos tells Gendry he might want to bring a sword for the coming war, Gendry responds, "I don't know much about swinging swords, but this? This I know," as he picks up a badass piece of weaponry.

So what's up with the giant hammer?

Well, Gendry's father, Robert Baratheon, was known for his war hammer. In fact, he used it to kill Prince Rhaegar Targaryen during his rebellion against Mad King Aerys II, which happened years before the events of the books/show.

Related:
Why the First Men Are a Crucial Part of Game of Thrones History

But Gendry has his own war hammer — complete with a Baratheon stag on one end — which he wields sufficiently to kill two Gold Cloaks who are threatening Davos, Tyrion, and Gendry's escape from King's Landing after Tyrion meets with Jaime to discuss an armistice. Gendry doesn't exactly know what he's getting himself into at this point, but he doesn't really care.

"You came to get me; you want me to come with you," he says to Davos in Flea Bottom. "I'm ready; let's go . . . what do you think I've been thinking about with every swing of the hammer? How happy I am making weapons for the family that killed my father? The family that tried to kill me? I've been getting ready. I never knew what for, but I've always known I'd know it when it comes."

Related:
What Happened on Game of Thrones This Week? 30 Seriously Insane Things, For Starters

So Gendry and his war hammer are united with Jon Snow and his wildlings to raid beyond the wall in an effort to convince the Southerners that White Walkers actually exist. They've also made a pact with the Brotherhood Without Banners, who Gendry is naturally suspicious of, since they sold him as a blood sacrifice to Melisandre for two bags of gold because the Red Priestess thought killing a king's offspring would put Stannis on the throne.

But it hardly matters now. As Jon Snow says, since they're all breathing, they have a common enemy in the Army of the Dead, and if they don't come together to fight the Night King, they're not going to be breathing for much longer.