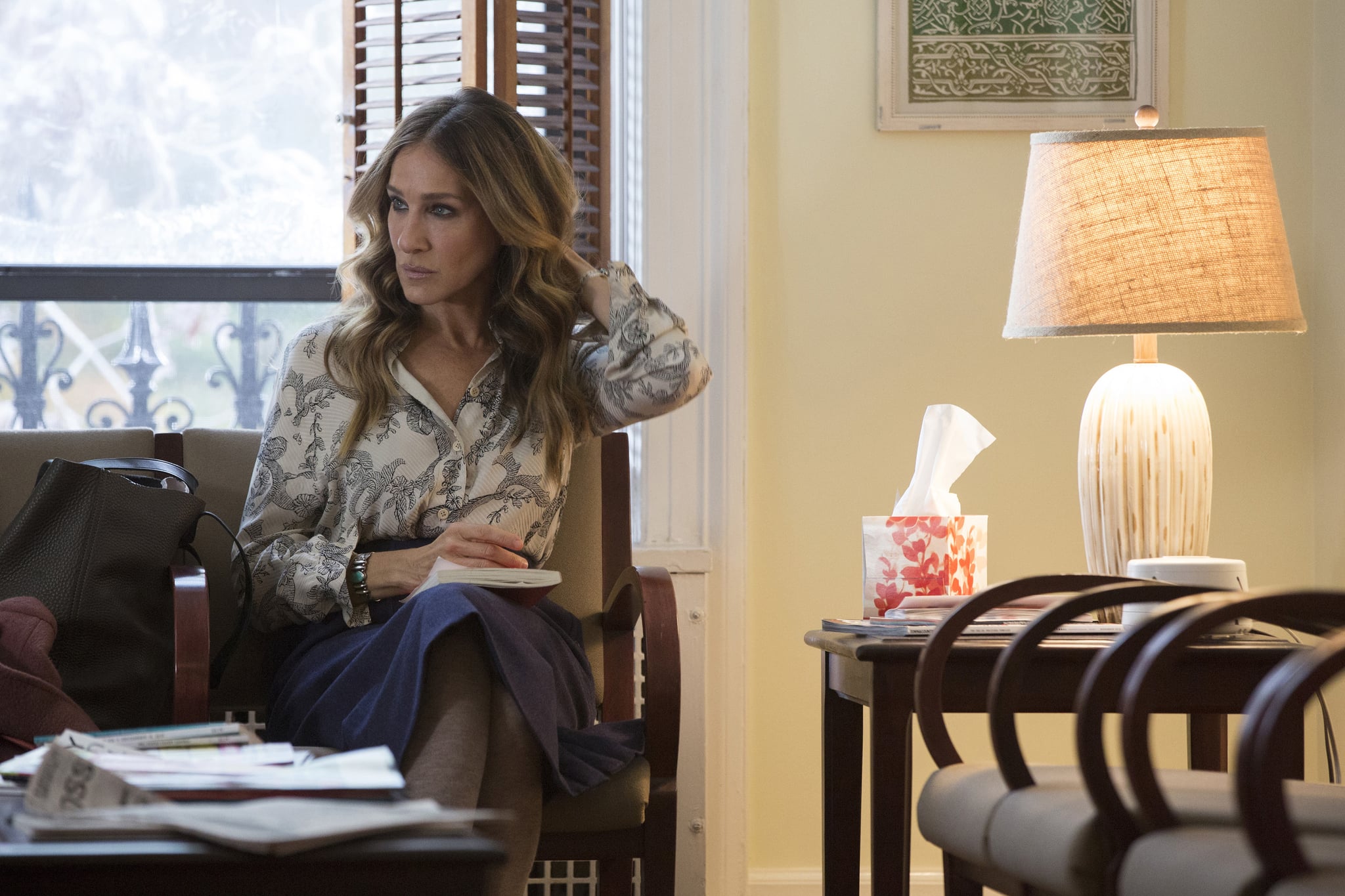 This month marks the arrival of Sarah Jessica Parker's new HBO show, Divorce. Needless to say, using "HBO" and "Sarah Jessica Parker" in one sentence together will almost always trigger one phrase: Sex and the City. As much as Parker wants to escape her iconic character Carrie Bradshaw, it seems the comparisons will never quite go away. Of course, the actress herself has talked about Divorce as an entirely different project and has discouraged the SATC comparisons. And, well, she's right: they're two entirely different shows. Even so, we couldn't help but notice how, on a much larger level, they still have quite a bit in common.

1. The Echoes of Carrie Bradshaw in Parker's Performance

OK, here's the thing: Frances is very, very different from Carrie Bradshaw. That being said, Sarah Jessica Parker played Carrie for 12 years, from the pilot of SATC to release the second movie in 2010. When you spend that long with a character, she lives in you. That's why there will always be just a little bit of Carrie in SJP. So, no, Frances is not Carrie, but they share so much. They're both complex and imperfect. There's a flicker of that signature Carrie wit, which is perhaps the most present in the moment she blames her crumbling marriage on her husband's awful mustache. Above all, no matter how hard she tries, SJP's mannerisms will just always have a little bit of Carrie in them.

2. Parallels Within the Characters

Outside of Parker's acting chops, these two characters still have a lot in common. They're both deeply flawed in very relatable ways. Hell, they both had affairs! And they both seem to behave in narcissistic ways that don't necessarily make them "likable." Not that they need to be likable, for the record. It's almost more fun when they're not.

One of the most astounding parts of Sex and the City is the stunning portrait of female friendship. Over the show's six seasons, there is a lot of talk about men, sure. But there are more tender, personal moments that have nothing to do with sex. A good example is the episode featuring Carrie's financial crisis, where Charlotte eventually lends her the money to buy her apartment from Aidan. Now, we're only one episode into Divorce, so there hasn't been a lot of opportunity for exploration. Even so, it's sweet to watch the trio — Frances (Parker), Diane (Molly Shannon), and Dallas (Talia Balsam) — in the huddled conversation at Diane's birthday party. The conversation between Frances and Dallas on the commuter train, in which they talk about Frances's marriage and also reveal she's having an affair, is also impactful and realistically candid. These are the kinds of relationships that make or break the show, and keep the audience drawn in. 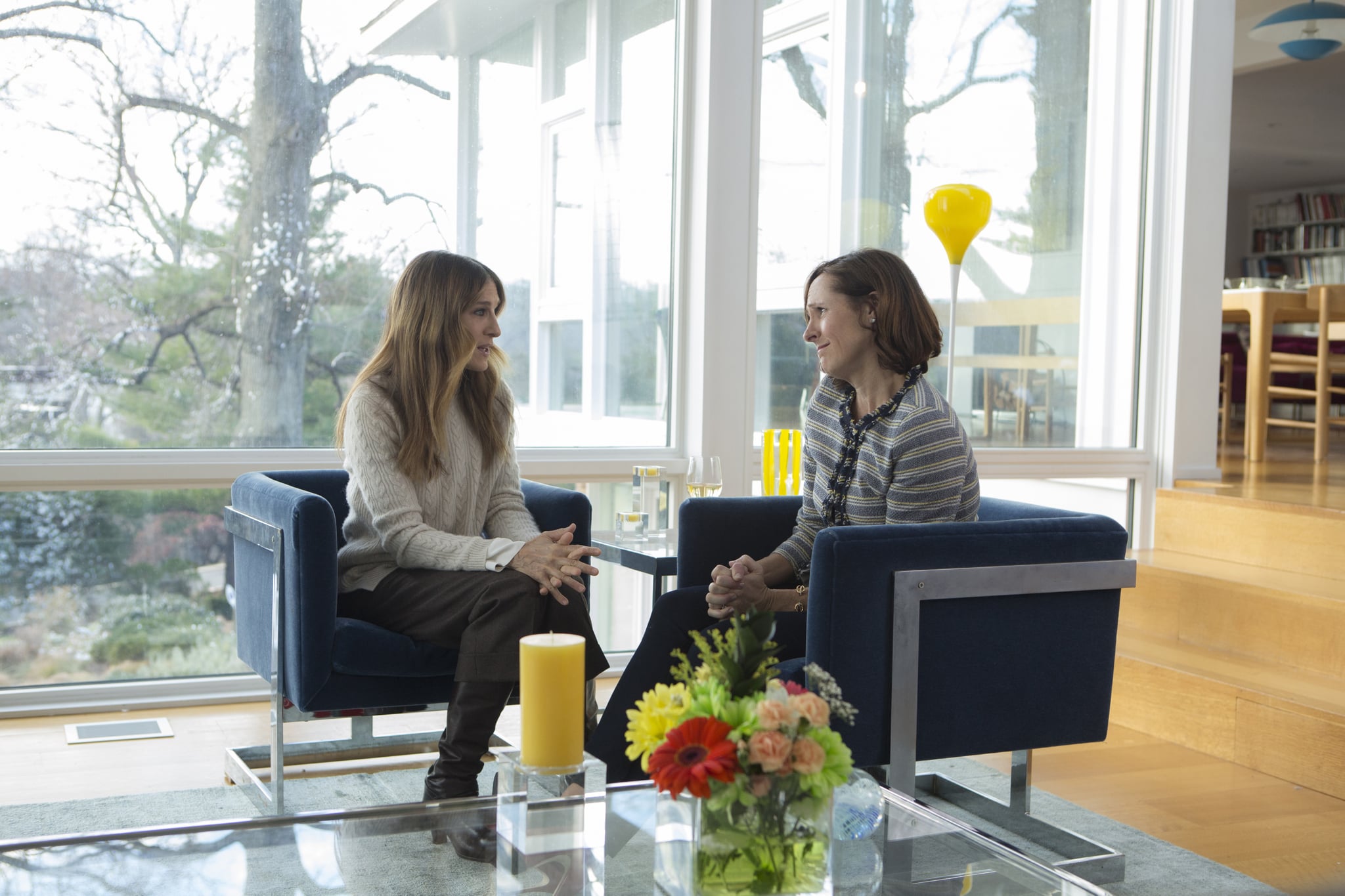 The relationships in Sex and the City are the foundation for the entire show. The same goes for Divorce. They're not so black-and-white, either. It's hard to assign blame to Robert or Frances when it comes to their failing marriage (though, going back to the mustache, it's a strong argument). When it comes to Nick and Diane, they are dealing with their own baggage. Even Dallas serves as commentary on life after divorce and being single. There's also fodder in Frances's fizzling affair with Julian. It's a portrait of the allure of sneaking around that comes with fidelity, and the way that can quickly deflate. It's clear that these relationships will only get denser and more complex as more episodes air.

It's not that Divorce is filled with sex, or that sex is even a focal point of the series. In fact, that wasn't really the case with Sex and the City either. Sure, it's in the title. And sure, there was sex on an episode-to-episode basis. But I'd argue that the sex was a prop, more of a means to an end. It was always on the table. The same goes for Divorce. There's not a lot of sex in the show at all. In fact, the only sex we see is the stifled, unhappy sex between Frances and Robert. It's more about the way it exists on the fringes, as an inherent part of life. Frances talks about the orgasms her secret lover gives her while on the train with Dallas. (Which, by the way, is not far from having the same talk over brunch, à la Carrie Bradshaw.) We see the postsex normalcy between Frances and Julian.

One thing I admire about both of these worlds is the ambiguity. Can we blame Diane for snapping and drunkenly firing a gun in her own home? It sounds insane, but on some weird level, it makes sense. The same goes for Frances. She's cheating on her husband, and she's dragging him through the muck of her own unhappiness. It's not the best way to behave, but again, it's hard to hold it against her. On SATC, the four women face a lot of the same issues. These blurred moral lines are what makes the narrative so captivating. It awakens contemplation in the viewer and invites a return visit.