Do you ever find yourself rewatching old episodes of a show you loved as a kid — like, say, Spongebob Squarepants — and suddenly realizing there were jokes that went way over your head when you were younger? Well, that exact scenario unfolded for Reddit user FlyingNimbus33, who discovered a sneaky joke while watching The Office episode titled "The Job."

During the season-three finale, Michael Scott prematurely names Dwight Schrute as his successor before interviewing for a Dunder Mifflin corporate job he's confident he'll get. Overcome with his sudden power, Dwight taunts Jim Halpert by welcoming him to Hotel Hell, an establishment where "the sheets are made of fire" and he runs the show as coowner alongside Satan. And that's when the hidden one-liner comes in. 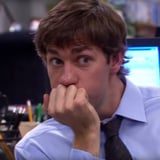 Someone Compiled the Best Pranks From The Office, and Now I'm Cry-Laughing

Dwight proudly tells Jim that his Hotel Hell salary is $80,000, which may sound like an oddly modest amount for him to pick in his fantasy dreamland. But alas, as pointed out by Reddit user FlyingNimbus33, dividing that sum by 12 would mean Dwight makes $6,666.66 a month, which is quite the genius reference to the devil's favorite number, 666. Is it a bit of a stretch that The Office's producers intentionally did this? Probably. But does it still make me giggle like Kevin Malone? Abso-freakin'-lutely. Now please excuse me while I go rewatch all nine seasons to track down more under-the-radar moments like these.