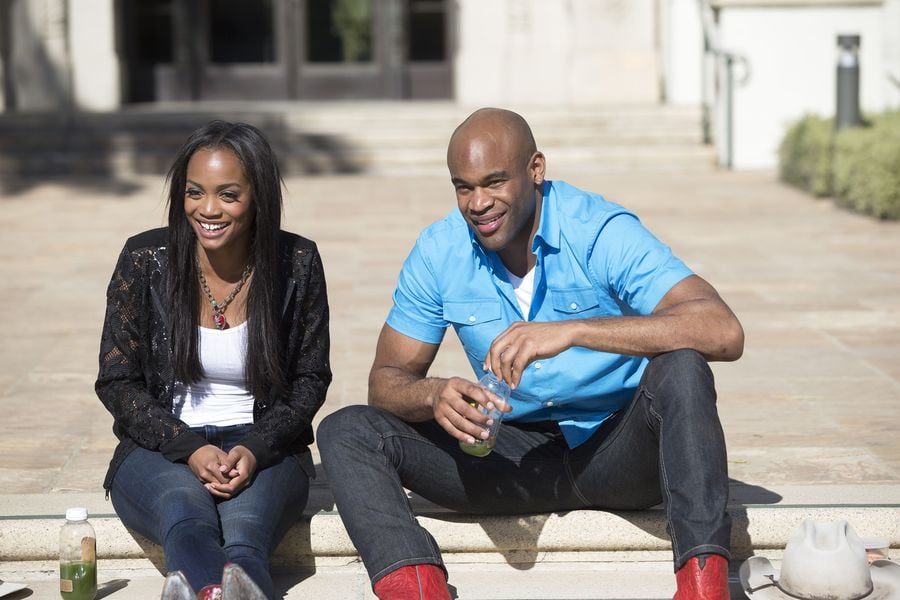 When it was announced that Rachel Lindsay would be the Bachelorette — the first black woman to take the position — I wondered how the producers would handle it. I also wondered how it would make the show different, and how it would stay the same.

What I wasn't prepared for is how many real moments I would see for a show that is arguably an unrealistic reality show about people getting engaged after less than two months of "dating." The first moment that brought me back to reality was when the season kicked off with Rachel meeting her first four suitors on After the Final Rose. 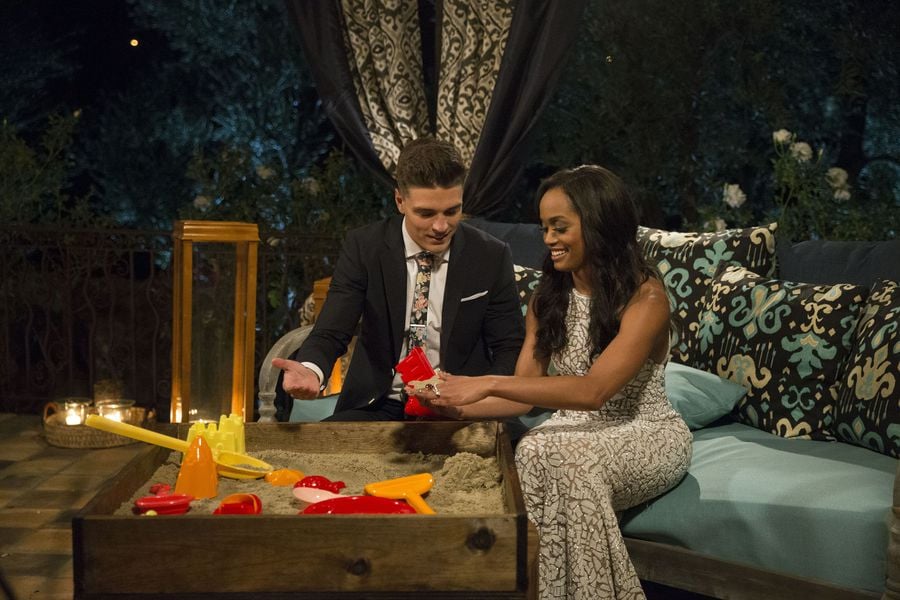 Each man gets to make a quick first impression with Rachel, and when it is Dean's turn, he says, "I'm ready to go black and I'm never going to go back." This is hardly the first time this phrase has been said in our culture. Some black people have said it jokingly, and some white people have said it to black people, fetishizing and reducing them to the color of their skin. So it's no wonder this is a red flag to many people or why there was backlash.

Let's discuss what a comment like that means. It could be a sign that a person views black people solely to sexualize them. It's racist, and there is a long history of white men sexualizing black women in America, from the days of slavery to now with the way black women are treated as a very specific fetish in pornography.

So when the actual season of The Bachelorette began, Dean almost immediately brought up his comment to Rachel to get a reaction. She acted perfectly fine with it, and even referred to it as her line. This awkward sexualization isn't uncommon for black women in the dating world, and neither are the other racist undertones of the season.

Finding Out the Man You're Dating Is Racist

It didn't take long for fans to find racist tweets from Lee's past, so chances are the producers who had to vet these men before meeting with Rachel knew about them, too — and they still cast Lee to be one of the many possible men who could marry her.

Many people who aren't normally subjected to racism might wonder why a person who has these views about Black Lives Matter would date a black woman. But as a black woman, it's not surprising at all. First of all, racists hardly like to identify as being racist. Lee most likely thinks his opinions on Black Lives Matter are totally warranted and aren't evidence that he hates black people at all. Lee notably tries to come off with an air of politeness by not raising his voice when he says something offensive to Kenny or acting nice to other black men in the house while targeting another to excuse to his racist behavior. 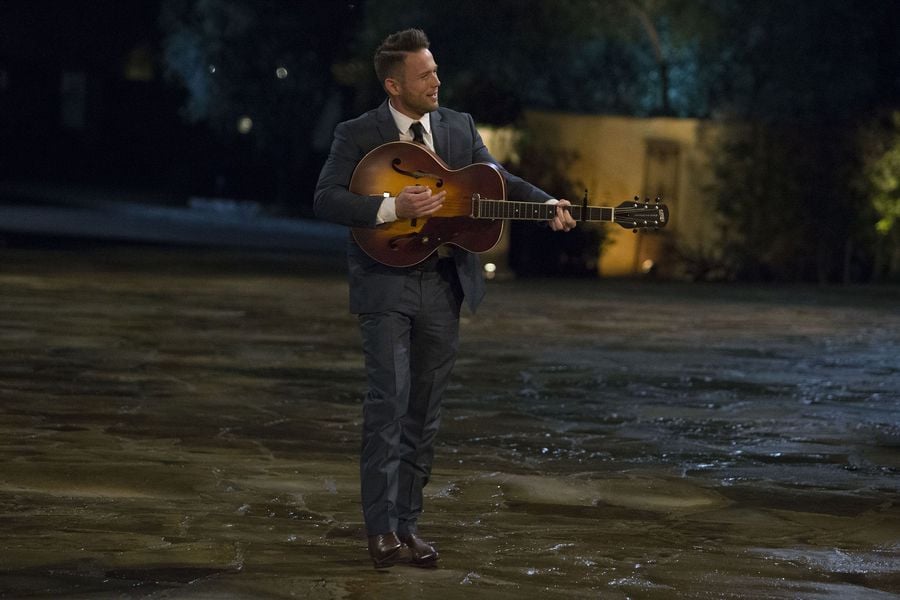 This type of behavior is called "moral licensing," or doing something good to excuse bad behavior later. You might have heard people say "I can't be racist; my friends are black," or "I can't be racist; I voted for Obama." Stanford psychologists found that these sayings are a way for people to show their "moral credentials," and that many of those who did vote for Obama felt much more comfortable with voicing their prejudices later. You can imagine the line "I can't be racist; my girlfriend is black" would be very valuable to a person of similar character as well.

Sadly, as a black woman, coming across men like Lee isn't uncommon. I've been referred to as this mythical type of black person who "isn't like the others" — and was expected to take it as a compliment. There are many racists who have no problem going on a date with a black woman and still voicing their racist views, hoping you will make them feel better about them. Lee does this in several ways, like by trying to get Will to call Kenny aggressive, ignoring the racial context and his own insistent aggressive acts towards Kenny. He also tries to win Rachel over by poisoning her view of Kenny.

It doesn't work, but it would be horrifying if it did. And it's even more horrifying knowing the producers included this man to stir up reality show drama.

The Microaggressions of Black Men

There can be many microaggressions when dating people of other races, but there are situations that pop up while dating within your own race as well. We see this when Will mentions to Eric that he has only dated white women in the past. This later becomes relevant during his one-on-one date with Rachel, when he is noticeably not affectionate with her.

When they have dinner at the end of the date, she tries to get a sense of what is going on. Will finally says it: "I've typically only dated white girls." When pressed on why, he answers there just weren't many black women around where he grew up, but Rachel makes it a point to say she also was raised in an area that wasn't diverse and still dated black men. Rachel is also noticeably put off when Will describes himself as passionate but hasn't even tried to kiss her.

This type of microaggression isn't uncommon in the black community. I've dated white guys who never dated black women before, but I've also dated black men. There are many reasons for this, but the biggest hot-button issue is the terrible stereotypes of black women. Black women are perceived as less innocent, more sexual, and too aggressive. Sadly, many people within our own community have bought into these stereotypes.

Recently, rapper Kodak Black made headlines for not only saying he doesn't like "black girls," but that he also doesn't like women with his own complexion because "We too gutter, light-skinned women more sensitive." Kanye West actually referred to women of mixed race as "mutts" and said he preferred them to use in his videos. Colorism stems from the way light-skinned and dark-skinned black people were treated differently throughout slavery and still persists and tears our community apart today.

It should be noted that Rachel herself wouldn't be labeled as a light-skinned woman, so this painful interaction is common and frustrating. This bachelorette not only has to deal with racism from some of the white contestants, but misconceptions from the black ones as well. She deals with this by sending Will home, and it's understandable and disappointing.

This season we see Eric being a little suspicious of Rachel for sending home so many black contestants when talking to Will. He mentions more white men are getting one-on-one dates and are being treated differently. This is possibly true, but it also brings into question whether this is a production choice or Rachel's. Either way, Eric seems to have a critical eye when it comes to Rachel and her interactions with the white contestants. People of all races undoubtedly still run into racism and criticism from their own community for dating interracially, but it's possible this affects black women more than others. 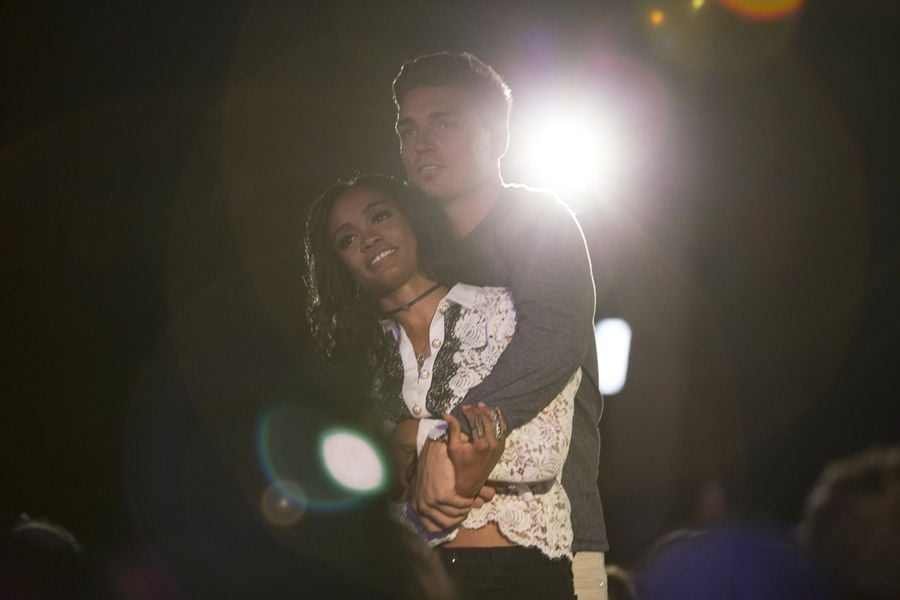 After all, only 12 percent of black women married outside of their race in 2013, while a quarter of black men did the same, according to Pew Research.

In my experience, I have heard many amazing black women say they aspire to have black love and hold out for a black man. So this overwhelming point of view does have an affect on black women who choose to date differently. Rachel has actually expressed herself that she feels pressure from the black community to pick a black man early on.

"That is a very common question that I get from black people," she told The Hollywood Reporter. "Honestly, I don't want to go into this process with any preconceived notions or any pressures to do something for somebody else. I hate to sound selfish, but it's my process."

I've also experienced harassment on the street from black men for being in an interracial relationship, so it's not surprising to me that Rachel is getting the same kind of feedback. It seems clear that Rachel is making bonds with multiple people of different skin tones. Her strongest was possibly with Kenny before they chose to go their separate ways. In the end, if Rachel decides to pick a white suitor instead, it's probably because she has a connection to him and not his skin.

Meeting the Parents in an Interracial Relationship

We saw on The Bachelor that the stakes of meeting the parents are higher when in an interracial relationship. Not only are you seeking the parents' approval, but you're seeing if your partner is actually comfortable being surrounded by black people. Being the only white person in the room is a rarity for most white people, and therefore could be very uncomfortable.

You're also seeing how your partner reacts in moments of cultures clashing. Rachel brought Nick Viall to church for this reason specifically: to see if he was comfortable in a black church, a place that is important to her. These are important things to consider when thinking about going into a long-term relationship with someone of a different race.

At this point, we haven't seen hometown dates this season. But we have seen Rachel laying down the groundwork for some of the men. She previously asked Bryan if his family would accept her and he assures her that they will.

The show could have certainly been better at casting and handling this very important season.

In 2017, this might seem like a weird question, but I found myself asking the same question to my white boyfriend years ago when we were getting serious. Even though Bryan says it won't be a problem, we can't totally be sure because people, no matter their hypothetical views on race, can still react differently when it's their own children in a real situation. We will have to see how this season's dates play out.

Rachel Lindsay's season may look like just any other season to many fans of the show. But for many black women, these situations have most likely reflected their own dating experiences back to them. This is important for a black woman to be seen as worthy of men's affection, like so many white women have been portrayed in the previous seasons.

It's also important for these moments of the season to assure black women that their experiences are real and valid and open other people's eyes to how far our society still has to go. The show could have certainly been better at casting and handling this very important season. It's shameful that a person like Lee was cast as if he was just another villain that would make good television. But there is the small bright side: that many more can see the realities of dating as a black woman.