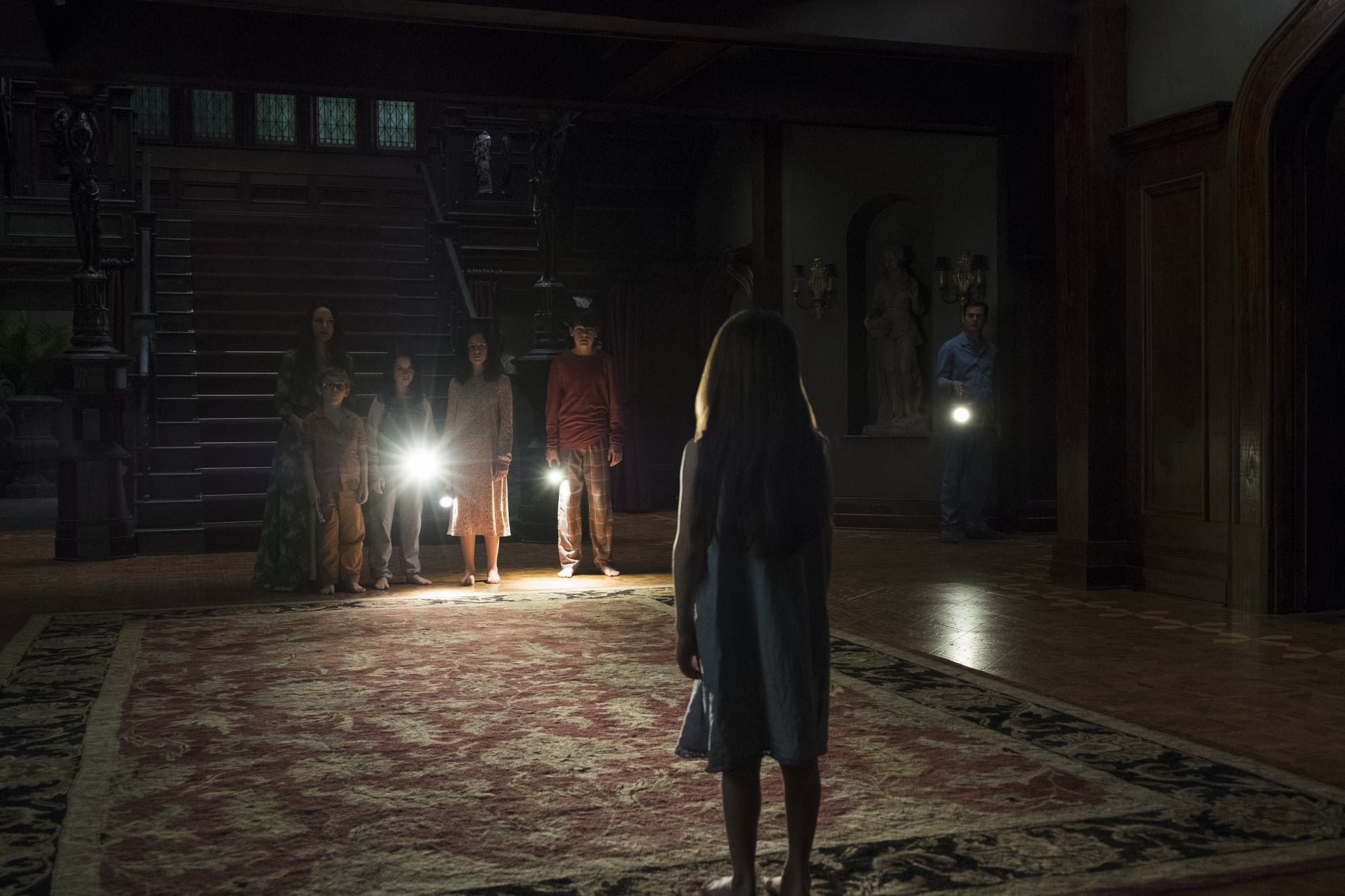 If you've succumbed to a gut-wrenching binge of The Haunting of Hill House, chances are you're still trying to unravel all the tiny details that make the show so special. And yet, for all the subtleties contained therein — like the Crain siblings' metaphorical significance — there's one brilliant thing fans of the show seemed to have honed in on from the get-go: the sixth episode of the show. I'm sure you remember the beautiful drama of this particular chapter. In the present day, all of the Crain siblings have finally reunited for Nell's funeral. In the past, the family huddles together while a superstorm ravages the haunted house. But it's not just the beats of the story that make the episode that stand out, it's that the episode seems to play out through one long, glorious take.

As it turns out, this was a very deliberate move on the part of creator Mike Flanagan, who wanted to add a lot of gravity to the moment all the siblings are together under one roof. In a new interview with Entertainment Weekly, he went into great detail and explained how they pulled it off. As you might have guessed, they didn't just churn out the episode overnight. Instead, it took more than a month of careful planning, intense choreography, and hard work. And it's fascinating.

In the interview, Flanagan revealed that the idea had been a part of the project all along, even from the very first pitch meeting. When it came to actually executing the idea, the first order of business was rehearsal. Weeks and weeks of rehearsal.

We wrote all of the camera choreography into the script for the episode, back before we started production . . . We rehearsed it with our second team stand-ins, who basically performed the entire episode as actors for about five weeks straight, every day. We had shut down production and we just rehearsed with them, with the crew, and kept running it and running it and running it. After a month of that, we brought the cast in and we were able to show them the episode. We had shot it with the second team. So we said, "Here it is and this is what we're doing," and then the cast had two weeks with us in rehearsal. We kind of looked at it like live TV. Ultimately, it's five long shots and we did one a day for five days. It almost killed us. It almost killed everybody.

Flanagan also revealed that 200 people had a hand in making the episode happen, who all had to coordinate and work in perfect harmony with one another. "I'm really glad that it's being received the way it is, because that was the hardest and riskiest and scariest thing I think any of us on that stage had ever done."

For all the nail-biting and hand-wringing, Flanagan also revealed that the episode was a lot of fun. He spoke about one particular moment, when Hugh is in the funeral parlor and his adult children become little kids again before his eyes. "It was hysterical. If you step out of frame, it's hilarious, and the kids were all crouched down and hiding in the intake room right next to them, and they would just sprint into place. And while they're doing that, in the background you're watching crew frantically pull out this dummy of Victoria Pedretti from the casket to help little Violet climb in her place. So we were doing all these off-camera switches."

Then there was another fun one: when Olivia (the mom) is going through the halls and the statues appear to be turning their heads, watching her go around. "[It] looks really cool, except that when you see the crew members hiding behind the wall carrying statues that all have different head positions and frantically diving into frame to get them there before the camera turns back around, it's funny." 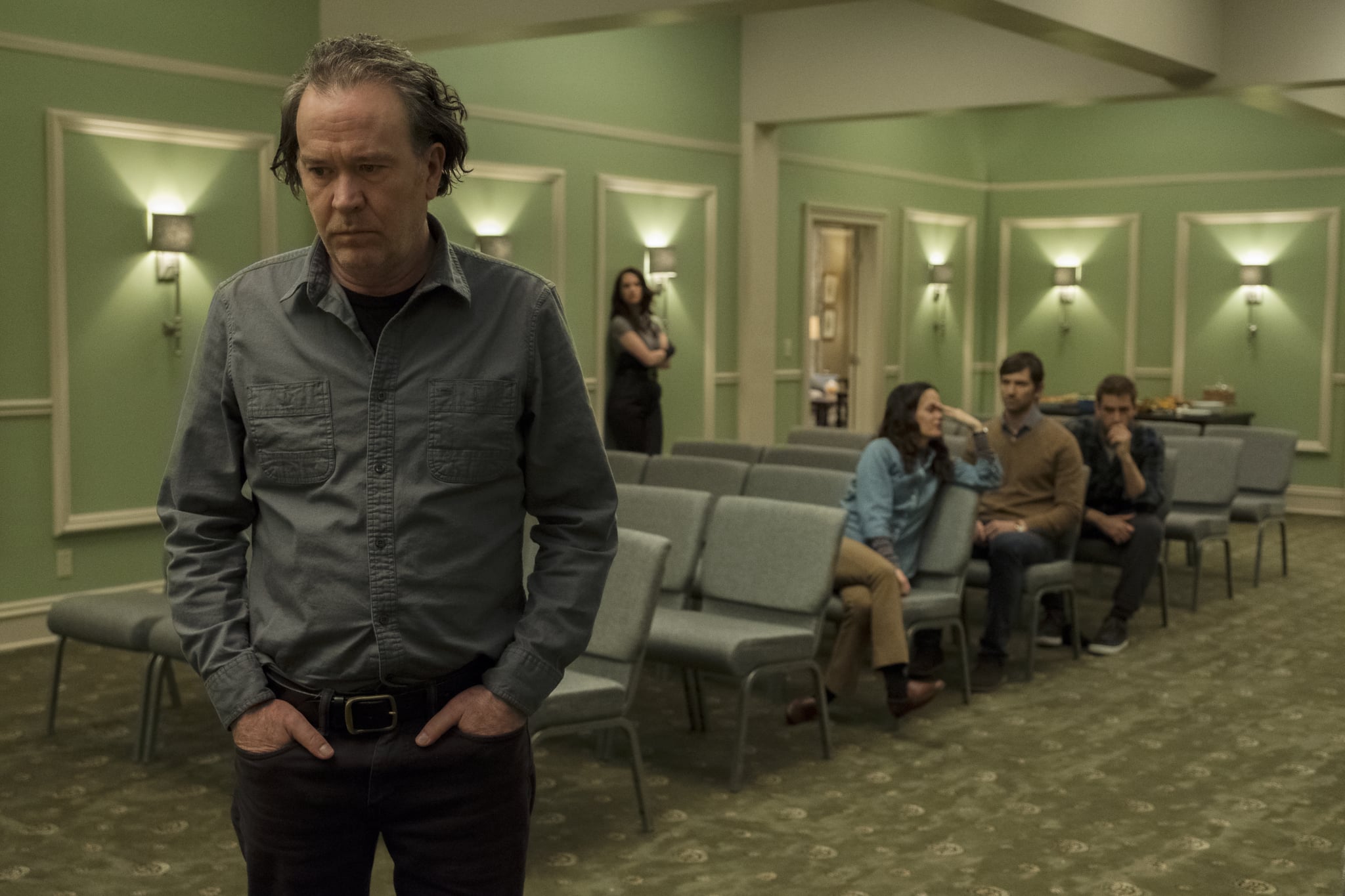 In another perplexing shot, the camera seems to be in the middle of the grand foyer, and it seamlessly floats as Olivia and Hugh, the Crain parents, descend from the second floor to the first. "We built an elevator and suspended it from the ceiling. It's out of frame for the rest of the shot, but it would have to lower in while we were with them in the hall, and then the steady cam op just steps onto it," Flanagan revealed. "It lowered into the floor. He stepped out and then it went right back up to the ceiling so he could turn around and it would be gone." Damn. That's wild.

"It was a circus, and it was the weirdest thing for me and for [cinematographer Michael Fimognari], because typically we're really involved in a given take," Flanagan continued. "But with this, all of our work was up front and all we could do was sit at the monitor and watch, and there was just nothing we could do anymore. Usually about halfway through a take, if it looked like we had a chance to get it, we would just grip the armrests and I think I held my breath for the last three minutes of that third segment, which is our longest . . . it was just panic, but it really worked out."

So, there you have it. Luckily, the hard work of Flanagan and the rest of the crew hasn't gone unnoticed. It's one of the most brilliant episodes of television that I've seen in a long time.