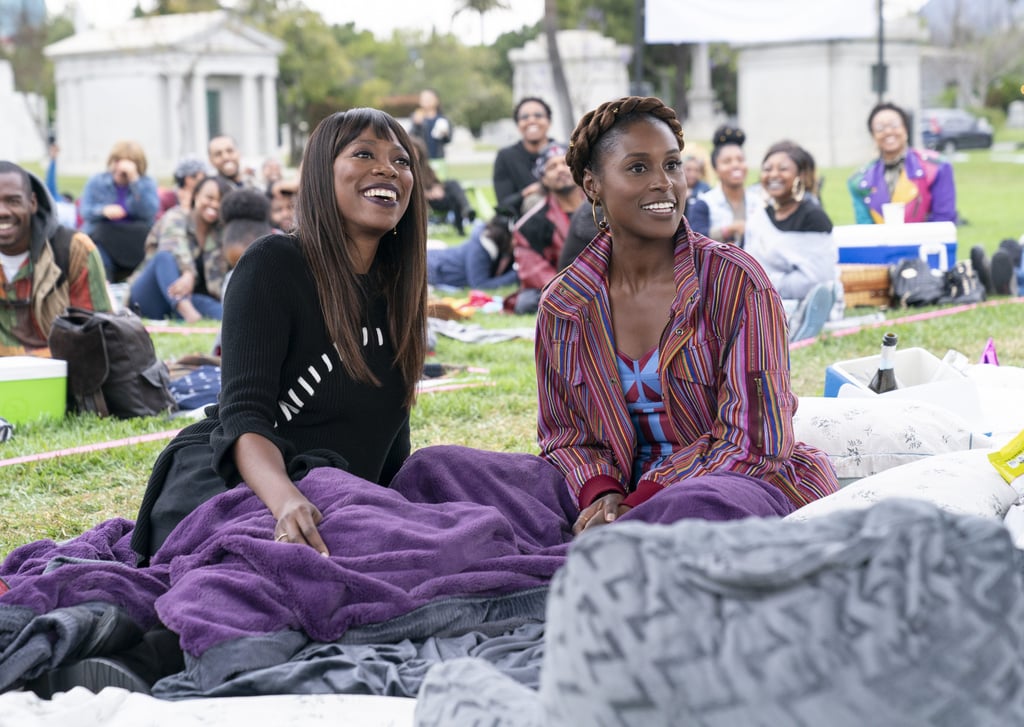 Whew. Insecure's third season was full of surprises in each episode — from the "will they, won't they" tension between Daniel and Issa; the return of Lawrence; and the appearance (and disappearance) of Nathan (aka "Lyft Bae"). We went from Issa sleeping on Daniel's couch to her having her own place and working on making her idea for a block party come true, all over eight episodes! Alas, the season three finale aired Sunday night, and it was a doozy.

In "Ghost-Like," Issa and company take the first steps to making some big changes. Nathan and Issa have a conversation about his disappearance that ends with her telling him that she needs time to figure out what's best for her. She goes into her barely furnished apartment and spends the night putting it together, finally making the space a home. Molly makes a call to Andrew to apologize for her "selfish" behavior and admit that she's been going through something that caused her to lash out — though she admits that doesn't justify her actions. Though we don't see how the call ends, we can only hope to see more of Molly and Andrew's relationship next season. Lawrence realizes that he's been romanticizing relationships and goes on a date with Condola, whom he initially rejected because she's been divorced. It's all very grown-up, and we're all hopeful that the glow up will continue in season four.

Related:
Insecure's Season 3 Soundtrack Will Make You Forget About All Those Bad Decisions

But since this is Insecure, nothing is that simple. Though Issa has obviously matured to the point where she's no longer leaning on either Molly, Lawrence, or Daniel, she's still Issa. She has a big idea for a neighborhood block party that she'll have to see through, as well as getting another job (since Lyft won't be paying her bills). While she did have a job interview with The Beat Crew, we're pretty sure her abrupt exit from We Got Y'all will be coming back to bite her in the butt somehow. And there's no way we're officially done with Nathan or Daniel yet. We need to figure out what happened with Nathan officially, and Daniel is way too fine to be off our screens for good.

There's also her relationship with Lawrence, of course. He says that the two of them are "done-done," but judging by their interactions during a lunch date and at the showing of The Last Dragon, it's obvious that's a lie. We also see Lawrence goes on a date with Condola, which seems cute until we remember Condola and Issa just began working together to bring the block party to life. Messiness. And, of course, Molly still has to figure out how to get back in her coworkers' good graces after trying to pull an "Annalise Keating" at the office.

We have a long way to go until season four, but thankfully the finale left us with plenty to think about! Read on to see how viewers felt about that season ending and their thoughts on Insecure's next season.