Mads Mikkelsen, the star of NBC's Hannibal, will eat just about anything — even things the show's enthusiastic but no-nonsense food stylist, Janice Poon, explicitly warns him against. For example, there was the time the actor spooned a heaping glob of lukewarm bone marrow into his mouth midscene.

"I told him, 'You can't. It's too cold. You'd need to put it on bread, anyway,'" Poon says, her broad smile somehow audible over the phone as she recounts the story from Toronto, where she lives and works. "And he said, 'Well, I'll try.' So he scooped out a great, huge gob of it and downed it. His head cocked ever so slightly. He faked swallowing, made it through the scene, came out, and spat it right into the garbage." 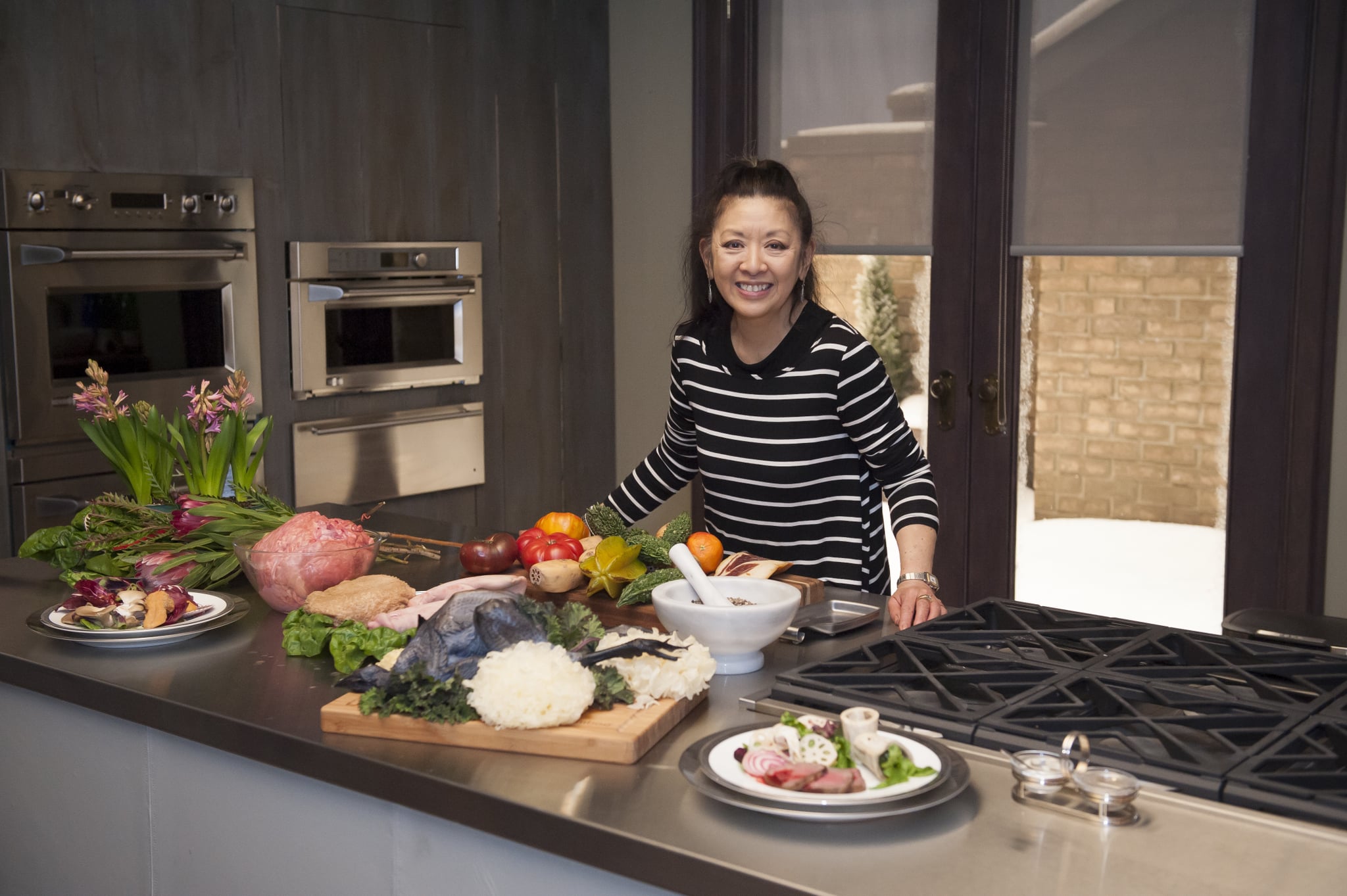 Hannibal, which returns to NBC for a third season this week, unleashes a level of terror and gore that tests — if not frequently oversteps — the typical standards of network television. Based on Thomas Harris's novel Red Dragon, a prequel to Silence of the Lambs, the series traces FBI consultant Will Graham (Hugh Dancy) as he faces off with Dr. Hannibal Lecter (Mikkelsen). Hannibal's cannibalistic creations are equal parts grotesque and gourmet, and they're no mere set dressing; the dishes are inextricably woven into the storyline of its episode. This means Poon's role far exceeds that of a typical TV food stylist, from her chummy relationships with the actors to the sheer demands of the job.

Working closely with series creator Bryan Fuller, culinary consultant and Michelin-starred, world-class chef José Andrés, and a bare-bones staff of two assistants, the often-ponytailed Poon might find herself tasked with crafting a lifelike, food-safe imitation of a human lung, sourcing sea urchin out of season, or, as a particularly memorable scene demanded, dreaming up a horrific-yet-extravagant way to serve up a calf. Fuller tells us that moment in particular was a great example of how the trio works as a team. "I send an email to José and Janice and say, 'How would you cook a human leg?' José very quickly responds: 'It must be ossobucco, served with canoe-cut marrow bone,'" he remembers. "Then, Janice starts filling in specifics . . . as to what lively fruits or vegetables or exotic sea life would animate the dish to tickle our imagination's taste buds." (The finished product: leg served baked in a clay shell, which Hannibal cracked tableside before serving up a slice to to the same poor soul the limb had been severed from just hours before.) Fuller's reliance on the duo's expertise even extends into the writers' room; he often asks Poon and Andrés to help craft Hannibal's dialogue during meals as the character waxes poetic about his culinary creations. 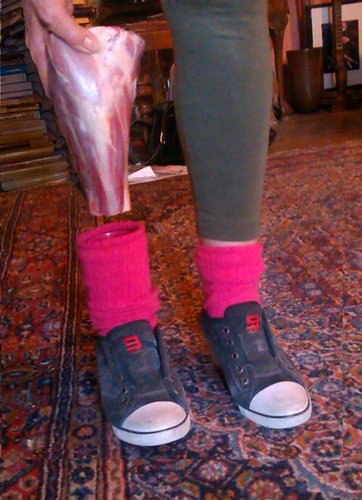 At left, Poon determines if pork tenderloin will make a good substitute for a human calf; photo courtesy Janice Poon

Typically clad in her standard uniform of all black, Poon is frequently up before dawn to stop by the butcher shop where she is a regular, if not always welcome, customer. "They always look at me with fear and loathing," she laughs, "because it's not going to be just a quick, ring-me-up sale." Despite the growing familiarity among the city's food purveyors with Poon's offbeat job cooking for Hannibal the cannibal, her occasional trip to scope out pig rectums or inquire after a camel leg still raises enough eyebrows.

Poon, who also sculpts, paints, and writes, arrived at her current job in a "sideways" manner. She grew up in Alberta, Canada, in a Cantonese family full of adventurous eaters and chefs; the first big meal she remembers cooking was a whole roast suckling pig with her older brother — just back from his first year at culinary school — when she was only 13. Her introduction to food styling came by way of a fast-food commercial she worked on as a young art director at an ad agency. She was "gobsmacked" to learn what went into crafting food worthy of a close-up. "All those hundreds of buns and billions of fries," she marvels. "Everything we went through to get one perfect burger! And even that wasn't perfect enough. We had to glue sesame seeds on it. We had to have it retouched."

Her natural curiosity, coupled with her sheer technical skill and artistic eye, are why Fuller tells us Poon "perfectly suited" to a job rife with challenges that, she only half-jokes, occasionally leave her feeling "victimized." One example? "Hannibal was making a point that some people are the same on the outside as they are on the inside. So he peels a Norton grape, which is a black grape, to show it's black inside, as well," she says. There was just one problem: real Norton grapes have the same greenish inner flesh as every other grape on earth. So Janice spent a late night peeling regular grapes, soaking them in purple juice to achieve the near-midnight shade the script called for, drying them, then playing with a series of waxes until she discovered one that would peel similarly to the fruit's naturally occurring skin and capture the nearly noir casing of a real Norton. This dedication to detail may be why Fuller is hard-pressed to pick just one of Poon's achievements as her most impressive: "Janice wows every time she steps up to the plate."

Still, Poon and Fuller seem to agree that their all-time favorite macabre meal from Hannibal's recipe book might be the faux ortolan she cooked up for the serial killer to serve to Graham in season two of the show. Her description of the songbird delicacy, prized by the ancient Romans and now outlawed by the European Union given the bird's endangered status and the cruel method of its preparation, is both poetic and disturbing. First, she explains, the buntings are caught and force-fed. "They used to blind them, but later, because they were so humane," she says with a drip of sarcasm, "they put something over the cage so it's dark and they eat. They feed them figs and nuts and berries until they're so fat, bloated, and gorged they can't stand. And then they take the birds, these fat old things, and they drown them in Armagnac [a type of brandy]."

The finished product is eaten whole. "When you bite down on them, you get the gamey taste of the bird itself, which is like squab or quail. Then you get that liver taste, kind of like foie gras, and then you get that Armagnac shot when you bite down on the lung. When you eat them — and people do still eat them, because they're fabulous, I guess — you're meant to put a napkin over your head so God won't see you," she says. "And so your dining companions don't see the bird grease drooling down your chin." Poon's much more humane version of the bird was made of marzipan and filled with nuts to emulate the crunch of bone as the actors bit into them.

Poon's encyclopedic gourmet knowledge and the elaborate dishes she crafts on Hannibal's behalf, which she documents in grisly detail on her blog, Feeding Hannibal, are at odds with her own refreshing lack of food snobbery. She has yet to visit any of her cohort José Andrés's restaurants, a fact she admits is "deplorable," and says that with her crazed schedule, takeout sushi is a standard weeknight dinner for her.

"If I'm at someone's house, I don't want to hear how this bird came from the third flock on the left in a tiny village on the shores of whatever," Poon says. "Just shut up and eat!"

TV
Fun Fact: I Know What You Did Last Summer's Alison and Lennon Aren't Actually Twins in Real Life
by Naledi Ushe 4 hours ago