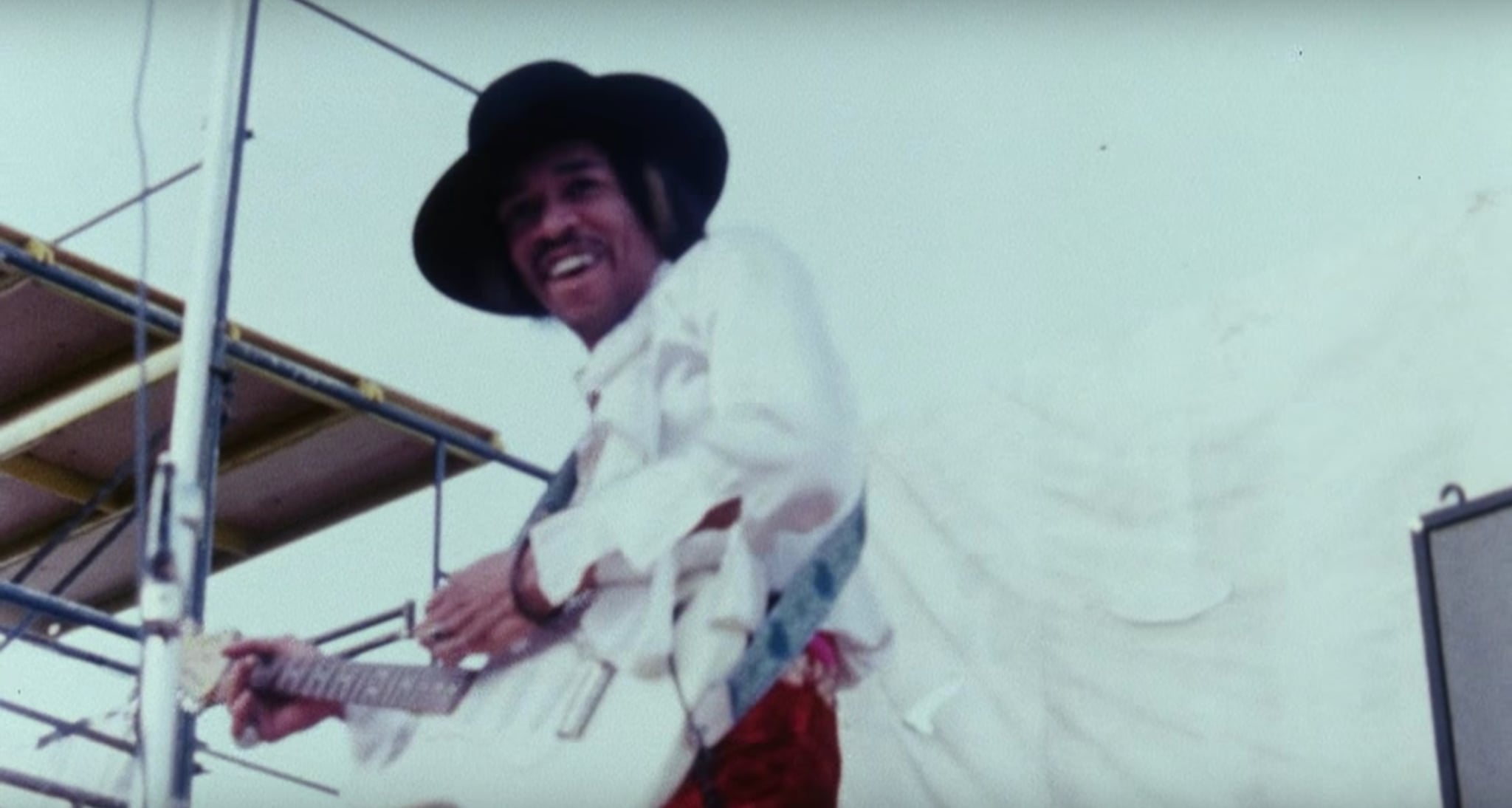 Sophomore year of college, my best friend and I took a trip to a local record shop called Vinyl Renaissance & Audio in Columbia, MO, to browse around and see if we could find any hidden gems. We had just moved into our new apartment, and I figured if we didn't find any records, maybe there would be some music-related decor we could snag to bring some life to our new space. Lo and behold, I stumbled upon a poster of Jimi Hendrix's Axis: Bold as Love album cover in all its bright, hypnotizing glory.

At the time, I honestly wasn't all that familiar with Hendrix's music. But after seeing the poster, my interest was piqued. I purchased it and plastered it on the wall of our living room, gazing at it before deciding to take a deep dive into Hendrix's catalog. The first track I played was "You Got Me Floatin'" — a banger. When I listened to his songs and their rock/blues/soul vibe, I felt something within me — something abstract and intangible — move and stir. That poster set me down a groovy path toward a whole new world of music and formally introduced me to Hendrix, the greatest guitarist of all time (in my humble opinion). 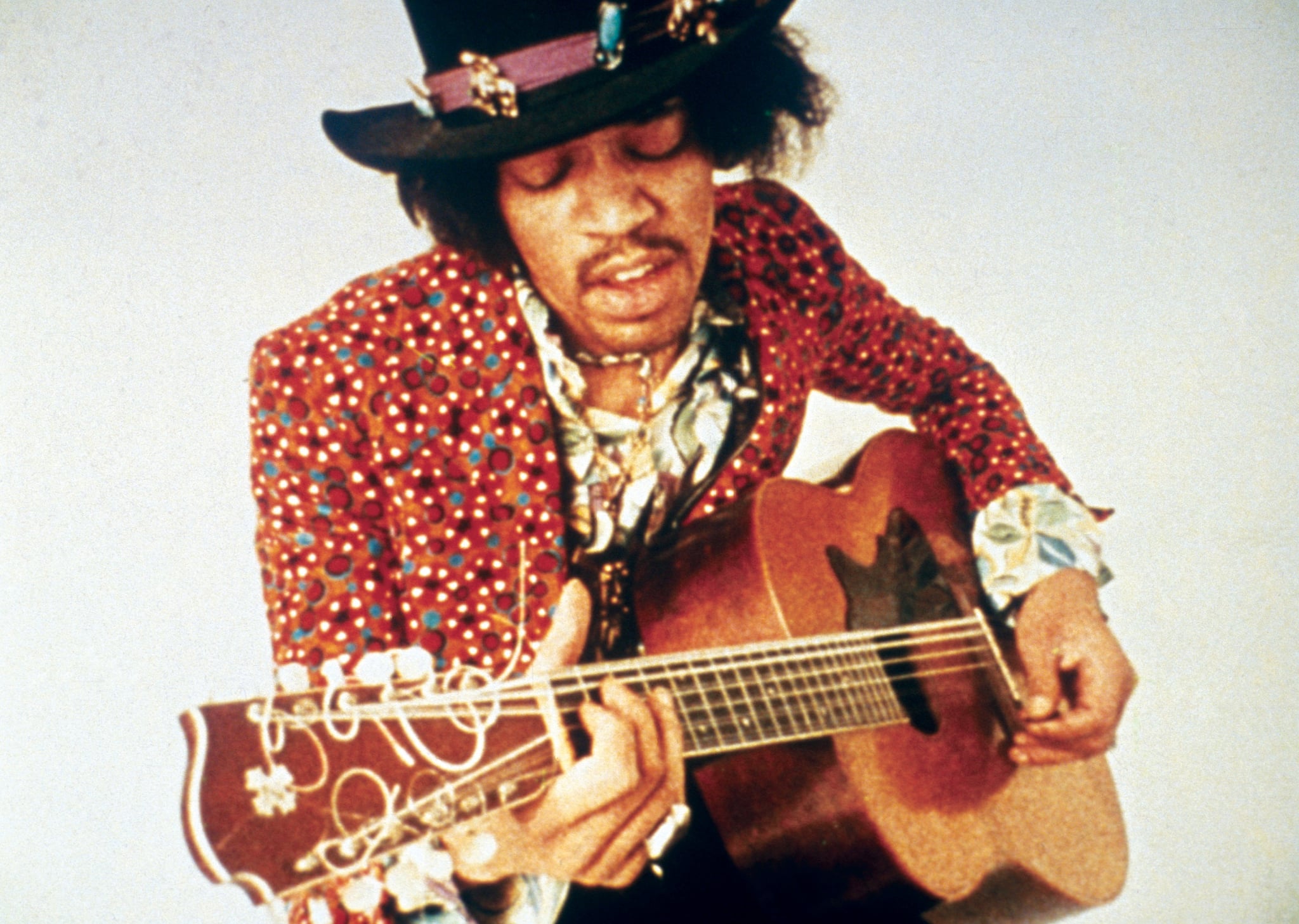 On May 18, 1968, Hendrix — and his band, The Jimi Hendrix Experience — touched down in Florida's Gulfstream Park on a helicopter to perform at the Miami Pop Festival. They played some of their best tunes from their 1967 album, Are You Experienced, as Jimi entranced crowd members with his unparalleled panache and brio. During their performance of "Foxey Lady," Hendrix closed his eyes while belting the words and sweeping his body with the rhythm. At one point, he even drew out the sound of his electric guitar with his upper arm and the microphone stand (perhaps it was a foreshadowing of his 1970 production of "Voodoo Child" and "Purple Haze," in which he actually started playing the guitar with his teeth).

Every time I watch the Miami Pop Festival performance, I feel an overwhelming sense of freedom from Hendrix. There's a freedom to move and groove, a freedom to shout and rock out. It's a performance quality that I've found to be one of his most alluring and something I've aspired to attain: emancipation from the norm and the courage to be my authentic self.

Matt Bellamy — lead singer and guitarist of the rock band Muse — beautifully described Hendrix's style in a 2010 issue of New Musical Express magazine when he said, "Hendrix is not necessarily about melodies or chords, [it's] about the energy he brings to it . . . He was a pioneer in using the studio itself as an instrument — wringing out unusual sounds until the environment was another extension of his own creativity."

This immediately reminds me of when Hendrix quite literally made the stage an extension of his creativity when he burned and smashed his guitar at Monterey Pop Festival in 1967 — not as a display of violence but as a sort of offering to the world. "I decided to destroy my guitar at the end of the song as a sacrifice," he said at the time. "You sacrifice things you love. I love my guitar." The first time I watched the moment, I thought, "This guy is insane . . . I love it." I was intrigued because Hendrix hauled me out of my comfort zone and into his own newfangled elucidations. 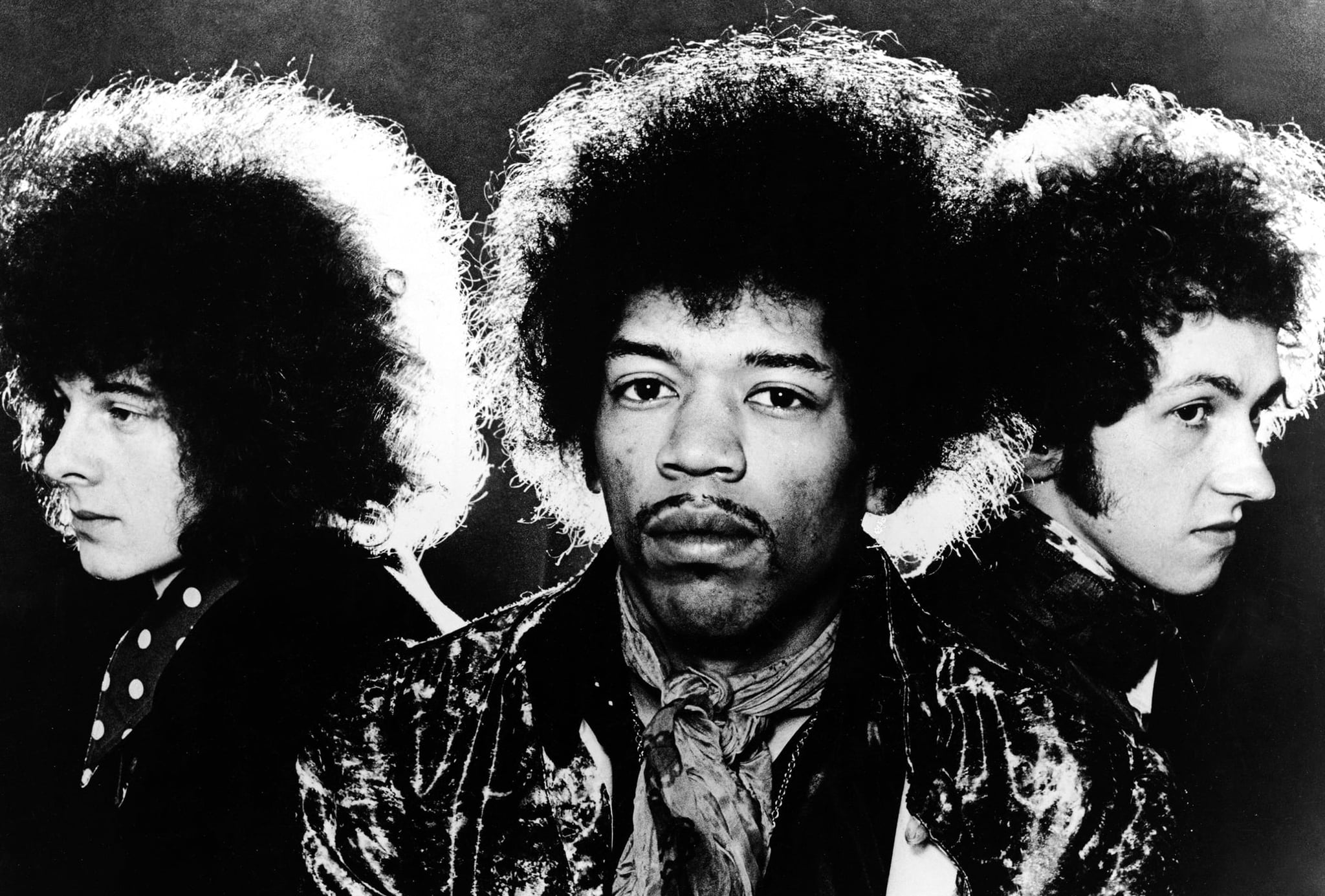 I feel especially drawn to Hendrix because of our shared belief in the power of imagination and the metaphysical. As someone who has struggled with anxiety, I find peace in music that is able to bring me out of my funk and take me to a different place. That's what Hendrix's music has done for me time and time again. The way he tells stories by painting a vivid picture with his lyrics, amplified by the textures of his sound, is purely transcendental. He can sing about anything and make it sound like a reverie.

Case in point: his song "Spanish Castle Magic." It's an ode to an old club called Spanish Castle, which was located near Hendrix's hometown of Seattle. Hendrix and his band would use the bass player's rickety car to get to and from the venue, and it would break down every few blocks. He refers to this in the lyrics, "It's very far away / It takes about half a day / To get there / If we travel by my Dragonfly." He then goes on to describe trekking to this "really groovy place" while seeing clouds that "overflow with cotton candy." The depiction is so exotic even though it's essentially just talking about driving to a club. His song "Purple Haze" is another example. It's partially about feeling high, but rather than explicitly saying that, Hendrix quavers, "Excuse me while I kiss the sky." That's what Hendrix did; he took earthly experiences and somehow managed to elevate them to a different realm — a sort of dreamland that I escape to whenever I feel my mind is bogged down by everyday fears, worries, and stressors. 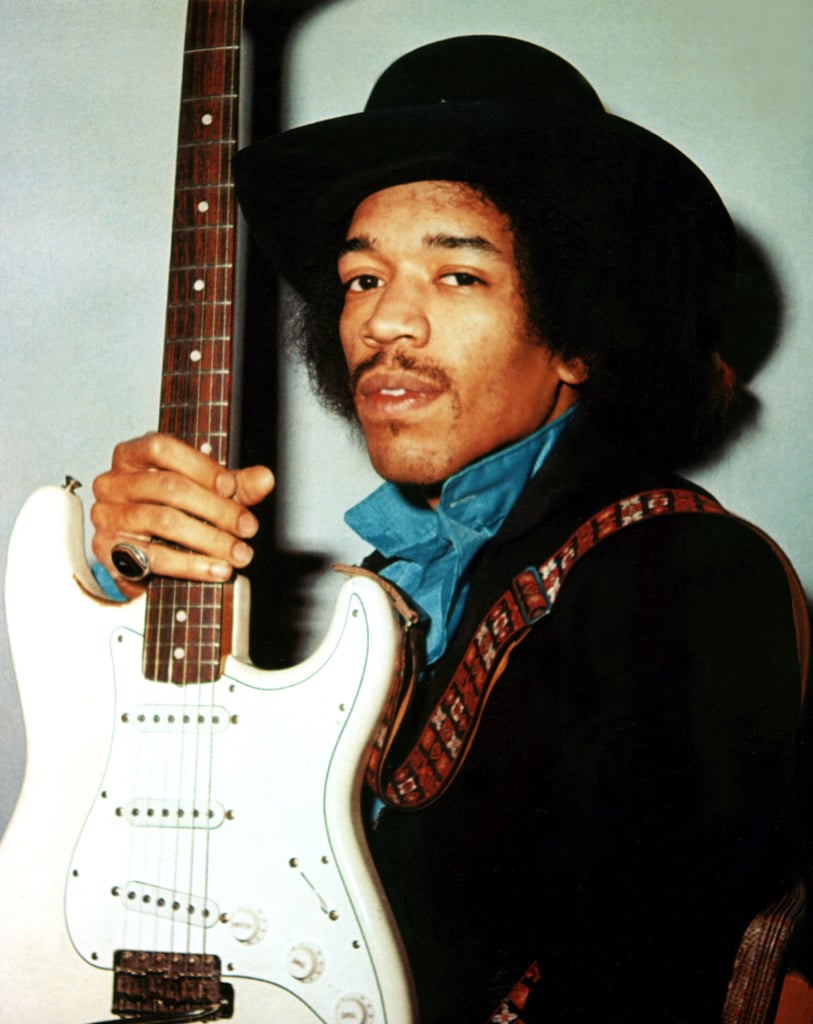 One of my best-loved quotes about Hendrix comes from Metallica guitarist Kirk Hammett, who cited Hendrix as his "hands down" favorite guitarist. He once told Rolling Stone, "His music was so visual. Hendrix had a way of saying something political without speaking outside his own musical language. And his guitar tone is something he completely invented. There is no one who sounded like him, before or after. He invented the Church of Tone. He had monster tone, monster technique, monster songs. And soul to spare."

Nothing validates Hammett's description more than Hendrix's epochal rendition of "The Star-Spangled Banner" at Woodstock in 1969 — probably my favorite performance of his in terms of impact. Clad in red, white, and blue, Hendrix strummed the national tune in a way that would have the country talking — one year after Black athletes Tommie Smith and John Carlos held up the Black power salute at the 1968 Olympics and around 47 years before Colin Kaepernick would take a knee during the national anthem to protest racial injustice in America.

During the Woodstock performance — in reference to the United States using bombs on Vietnam citizens in the Vietnam War — Hendrix imitated the screeching sounds of bombs and explosions by holding a note on his guitar while applying pressure to his tremolo bar that controlled the pitch of his instrument. The reverberations sloped into a shriek, and Hendrix created a sound akin to an air-raid siren. It was jarring, haunting, and all-around shocking. One attendee told the Today show back in 2010, "It was the most riveting moment. Just that single guitar, so piercing and so pure." Of course, I wasn't physically there, but I can still feel that gut-wrenching fervor by simply watching old clips of the set. It's a prime example of what I believe music should be: something with a message that elicits a thoughtful and sentimental response.

Hendrix's ability to transform one thing into something else was one of the key elements of his artistic genius. After Bob Dylan released his song "All Along the Watchtower" in December 1967, Hendrix covered the track the following month with a few altered lyrics and the addition of a chilling sound-bending guitar solo. And it wouldn't be an exaggeration to say that even though Dylan sung it first, Hendrix covered it better.

In 1995, Dylan reflected on Hendrix's version in an interview with the Sun-Sentinel, saying, "It overwhelmed me, really. He had such talent, he could find things inside a song and vigorously develop them. He found things that other people wouldn't think of finding in there. He probably improved upon it by the spaces he was using. I took license with the song from his version, actually, and continue to do it to this day." The fact that Hendrix's rendering of "All Along the Watchtower" was so compelling that the original singer — who again, I must emphasize, is Bob Dylan — performs it instead of his own version speaks volumes. It's something that I always think of when I listen to the song, and it makes me appreciate it even more.

The idea of Hendrix gaining worldwide recognition as a Black musician in the late 1960s in the traditionally "white space" of rock is something that has also always resonated with me. (Although I'm hesitant to call rock a "white space" considering its roots in Black musical styles, but that's a whole different conversation to be had.) Growing up, I always struggled with my Black identity and living up to it. I listened to rock as much as I listened to rap and hip-hop. I loved superheroes and read comics. I was extremely quiet, and when I did speak, I "sounded white" (seriously, what does that even mean?). I was "too Black" for some and "too white" for others. It wasn't until I was older that I realized my Blackness doesn't need to be proven or acted out. I'm Black because I'm Black — it's as simple as that, and it's something I'm proud of. And that's how Hendrix lived. He was well aware of his identity as a Black man, and he helped to broaden the perception and embodiment of Blackness by being himself.

Although Hendrix's career really only spanned over the course of about seven years and he lived to be just 27 years old, his impact has continued to boom and rumble throughout the music industry. Queen's Freddie Mercury dubbed Hendrix his idol in a 1975 interview with the now-defunct Circus magazine. In 2014, Saul "Slash" Hudson of Guns N' Roses named Hendrix as the greatest guitar player ever, as did Rolling Stone in its 2015 ranked list of the 100 greatest guitarists ever. Lenny Kravitz has even praised Hendrix's fluid and passionate style, noting, "His hands were connected to his soul, you know? His playing was just so emotional. You could feel the fire, you could feel the blues. You could feel the sadness. It's unbelievable." And John Mayer? He has attributed his success to Hendrix, declaring, "Who I am as a guitarist is defined by my failure to become Jimi Hendrix."

Hendrix put on quite a few electrifying performances within the last few months of his life. My favorite one was at the 1970 Atlanta Pop Festival in Byron, GA. Donning a colorful psychedelic top with dramatic butterfly sleeves, cherry red bottoms, and a green headband tied around his Afro, Hendrix stepped out and gifted the crowd with a spectacular set. During his live rendition of "Purple Haze," he practically became one with the electric guitar and just . . . shredded. With a flair and style that only he could emit, Hendrix brought the instrument to life, creating buoyant vibrations and mesmerizing listeners with every chord. At that moment, he again became the paragon of an otherworldly persona.

The Vinyl Renaissance & Audio store is now permanently closed, but it'll always have a special place in my heart for bringing me into the world of Hendrix. I truly believe that none can or will ever compare to him, and I'm forever grateful for the strides he took — consciously or not — to promote a more progressive society. Practically every guitar and musical style post-Hendrix has been influenced by the Voodoo Child, in some way, shape, or form — whether it's through direct adoption or allusive adaptation. Because of that, his sound has continued to serve as a generational bridge. Even while I was typing this at a coffee shop, an older woman behind me saw a photo of Hendrix on my laptop screen. "She's looking at Jimi Hendrix," she said to her friend. "That was my guy!" I turned around and smiled. Needless to say, we had quite a riveting conversation. 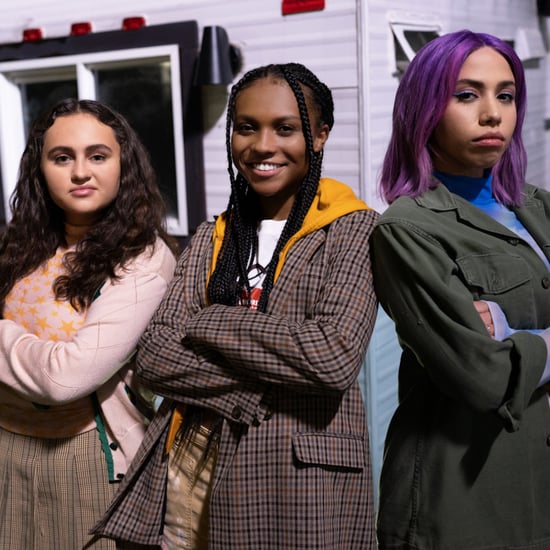