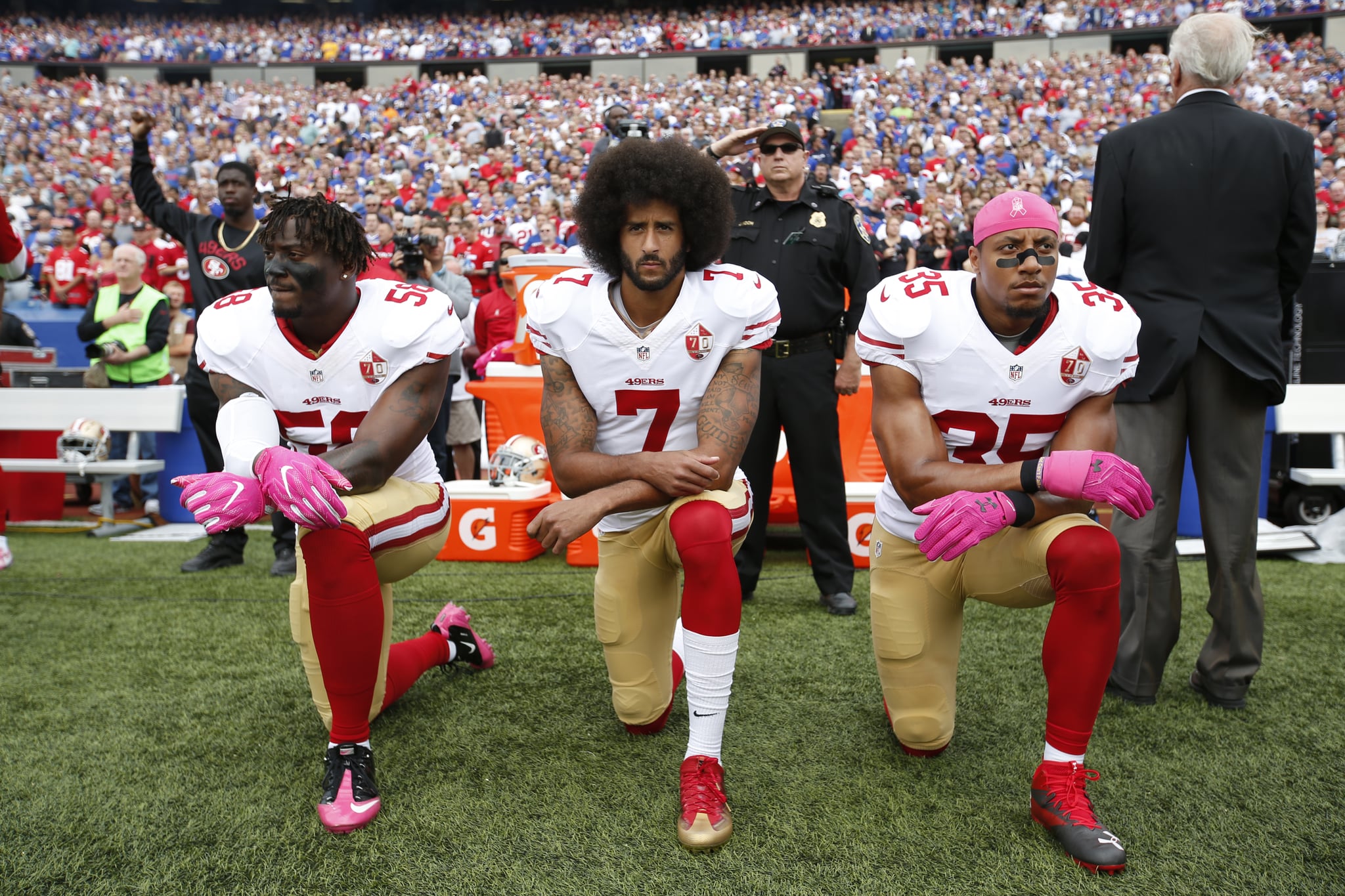 President Donald Trump's ongoing tirade against NFL players and their First Amendment rights has had one immediate, detrimental result: the media is now asking all the wrong questions. Heated debates are focused on respect and not justice, and the #TakeAKnee and #TakeTheKnee hype has overtaken the original message.

By the time the Sunday games kicked off on Sept. 24, Americans were more interested in who was taking a knee than the actual games themselves. Don't get me wrong — it was great to see numerous NFL players, coaches, and owners stand (or kneel) in solidarity with Colin Kaepernick. But whether they were actually in solidarity with Kaepernick and his message was hard to ascertain. Remember, Kaepernick began taking a knee during the national anthem in the 2016 season and there have been only a few notable athletes who have joined in the protest since. So, Trump's ongoing attacks — not the original message behind Kaepernick's protest — might have been the true motivator for the more than 200 players, coaches, and owners who took a knee or engaged in some form of protest. It's understandable, as Trump has been inspiring protests since he was elected president. But it's important that people don't get the message of the protest twisted because of the spectacle that Trump has made.

Hence, film producer Will Packer created a video to remind people exactly what that message was. In the video, a lone figure is seen kneeling in various locations as audio recordings of highly publicized fatal altercations between police officers and unarmed black persons plays in the background.

When Kaepernick first sat out during the national anthem at a preseason game in August 2016, it had nothing to do with Trump — he hadn't even won the election yet — or any desire to disrespect men and women in uniform. Kaepernick took a knee to protest the very events that Packer documented in the above video, the altercations where systemic oppression against people of color, police brutality, and the criminal justice system violently — and almost always fatally — collide. In an interview with NFL.com, Kaepernick explained:

"I am not going to stand up to show pride in a flag for a country that oppresses black people and people of color. To me, this is bigger than football and it would be selfish on my part to look the other way. There are bodies in the street and people getting paid leave and getting away with murder."

Kaepernick was referring specifically to the series of deaths of unarmed black people at the hands of law enforcement officers, such as the shootings of Alton Sterling and Philando Castile. It wasn't until Kaepernick's fourth silent protest that he was joined by his teammate Eric Reid, who revealed in an interview with The New York Times that he "felt furious, hurt and hopeless." Reid also explained the decision to kneel instead of sitting, saying that, "We chose to kneel because it's a respectful gesture. I remember thinking our posture was like a flag flown at half-mast to mark a tragedy." Slowly, athletes from various sports began following their lead to show their support. But it was nothing like what we saw this weekend.

The minute Kaepernick's protest caught the attention of the media, his actions were misconstrued in a thousand different ways. People began accusing athletes who kneeled of disrespecting those in the military, those who fought for the very rights that the athletes were exercising. When those very people themselves began kneeling in support, accusations of "ungratefulness" ran wild and people demanded that these athletes do their protesting "on their own time." No one wanted to address the topic that actually drove the protests, instead, it was often lost in the conversations that dominated talk shows and social media. Even now, the conversation seems to be focused on the question of whether or not athletes should keep politics off the field, rather than the reason athletes brought politics onto the field in such a public way in the first place.

Whether or not you agree with Kaepernick's decision to exercise his First Amendment right on the field, the most important dialogue that should be happening is the one about why he felt the need to protest.

If a knee in Freddy Gray's back upset you as much a knee on the ground, this would be over.

Racism and the oppression of people of color is why Kaepernick knelt. It's also why so many in the WNBA, NBA, and the NFL — all of which are largely populated with black athletes — support him; they know that having money doesn't mean you are immune from the cruelties of bigotry.

Kaepernick said it best in 2016, and it's still relevant today: this is bigger than football. It's bigger than Trump. This isn't a question of whether or not these athletes love their country, it's a question of whether or not this country is ready to do better for all of its people. And that should be the focus of the conversation, not indignation over how much attention is being paid during the national anthem. We cannot let other, more problematic narratives warp the true message of the #TakeAKnee movement. It's essential that we remember exactly where it came from, and why.

Mental Health
Saweetie's "3 Bs" — Balance, Breaks, and Boundaries — Are Her Antidote to Burnout
by Emily Oldenquist 6 days ago

by Shelcy Joseph 57 minutes ago