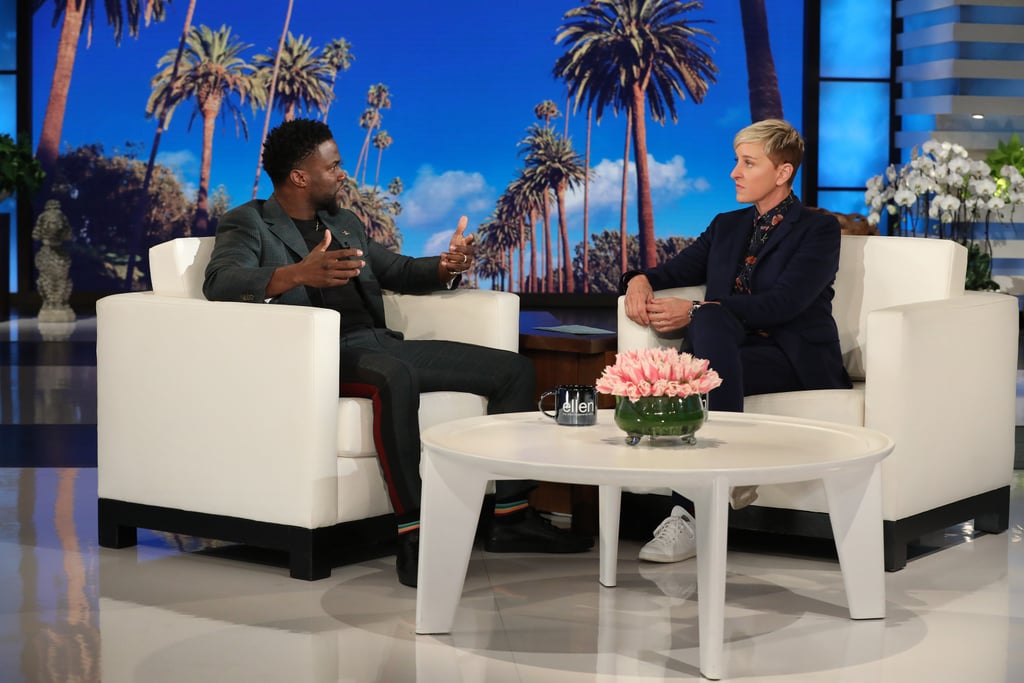 After Kevin Hart Defended Himself on Ellen, She Insisted He Should Still Host the Oscars

Kevin Hart now has a major supporter in his corner after stepping down as Oscars host due to his slurs and insults against the LGBTQ+ community: Ellen DeGeneres.

The Academy of Motion Picture Arts and Sciences' hunt for a host finally came to an end in early December when it was announced that the comedian and movie star had been given the gig. Hours after the Academy made the announcement, however, a number of Hart's old tweets, which included antigay slurs and homophobic insults, resurfaced online. Within a few days, Hart went from brushing off the controversy in an Instagram video — explaining that he's a different person now and that people need to "stop searching for reasons to be angry" — to deleting his old tweets and posting another video, claiming that the Academy gave him an ultimatum: apologize for the tweets or step down as Oscars host.

"I passed," he explained. "The reason I passed is because I've addressed this several times. This is not the first time this has come up. Regardless, to the Academy, I'm thankful for the opportunity; if it goes away, no harm, no foul." Minutes later, Hart issued an apology on Twitter and officially stepped down as host.

Related:
Kevin Hart Steps Down as Host of the 2019 Oscars

On Friday, DeGeneres gave Hart a full hour to promote his upcoming film, The Upside, as well as an opportunity to defend his decision to step down from hosting the Oscars. Hart spoke without interruption for almost six minutes, telling her that the opportunity to host initially felt "unreal," before complaining about how he was attacked for his old tweets.

"There's a lot of goals that I have on my vision board. There's so many things I want to do, I check off as they get done, and Oscars was up there. Oscars was one of the highest of highs, simply because there hasn't been a lot of African Americans that have been able to do it; I would have been the fourth. So, to get the moment, celebrate the moment — 'Oh, my God! I can't believe it's happening!' — and then the next morning after a day full of congratulations and celebrations, I'm hit with an onslaught on social media of my past coming back up again. Literally, the next morning! Not even a full 24 hours to glow in the glory of 'Kevin Hart Is Hosting This Year's Oscars.' When it happened, my first thought is, 'I'm going to ignore it. I'm going to ignore it because it's 10 years old. This is stuff I've addressed. I've talked about this. This isn't new. I've addressed it! I've apologized for it. I'm not going to pay it any mind.'"

Hart went on to call what happened to him "slander" and said he "doesn't have a homophobic bone in" his body. "I've yet to go back to that version of the immature version of the comedian that once was. I've moved on. I'm a grown man. I'm cultured. I'm manufactured. I'm a guy that understands now," he explained. "I looked at life through a different lens, and because of that, I live it a different way."

"I know you're not that guy, because I know you," DeGeneres said after he finished his lengthy explanation of his experience, before revealing that she actually called the Academy on his behalf in hopes that Hart could still host the ceremony and claimed that the Academy's reaction was positive.

"You called me right when it happened and said, 'I'm going to talk to you about it. I'm not going to say anything till I'm on your show.' I called the Academy today, because I really want you to host the Oscars. I was so excited when I heard that they asked you. I thought it was an amazing thing and how important it was and how it was a dream. So, I called them. I said, 'Kevin's on. I have no idea if he wants to come back and host, but what are your thoughts?' And they were like, 'Oh my, God! We want him to host. We feel like maybe he misunderstood or it was handled wrong or maybe we said the wrong thing, but we want him to host.' The Academy is saying, 'What can we do to make this happen?' And I'm saying to you, as one of the smartest people I know, one of the funniest people I know . . . what we're going to get to see onstage with you hosting the Oscars is sophistication, class, hilarity, and you growing as a person. Because most people would say, 'I'm walking away. I'm not going back. I'm going to go back and forth.'

But for you to be the bigger man, for you to say, 'I understand, and I'm not going to pay attention?' There are so many haters out there. Whatever is going on the internet, don't pay attention to them. That's a small group of people being very, very loud. We are a huge group of people who love you and want to see you host the Oscars."

Hart thanked her for her kind words, but didn't seem to believe the situation will be rectified. Instead, he continued to complain about people being upset about his tweets, claiming that by dredging them up, people were trying to end all of his "partnerships, brand relationships, all investment opportunities, and studio relationships" rather than attacking his thoughts on the LGBTQ+ community. "This was to destroy me!" he said. "This was to damage the lives that have been investing in me."

See his full conversation with DeGeneres, spread out over a series of four videos, ahead.

Celebrity Couples
No, Jodie Foster Did Not Set Up Shailene Woodley and Aaron Rodgers
by Grayson Gilcrease 2 hours ago