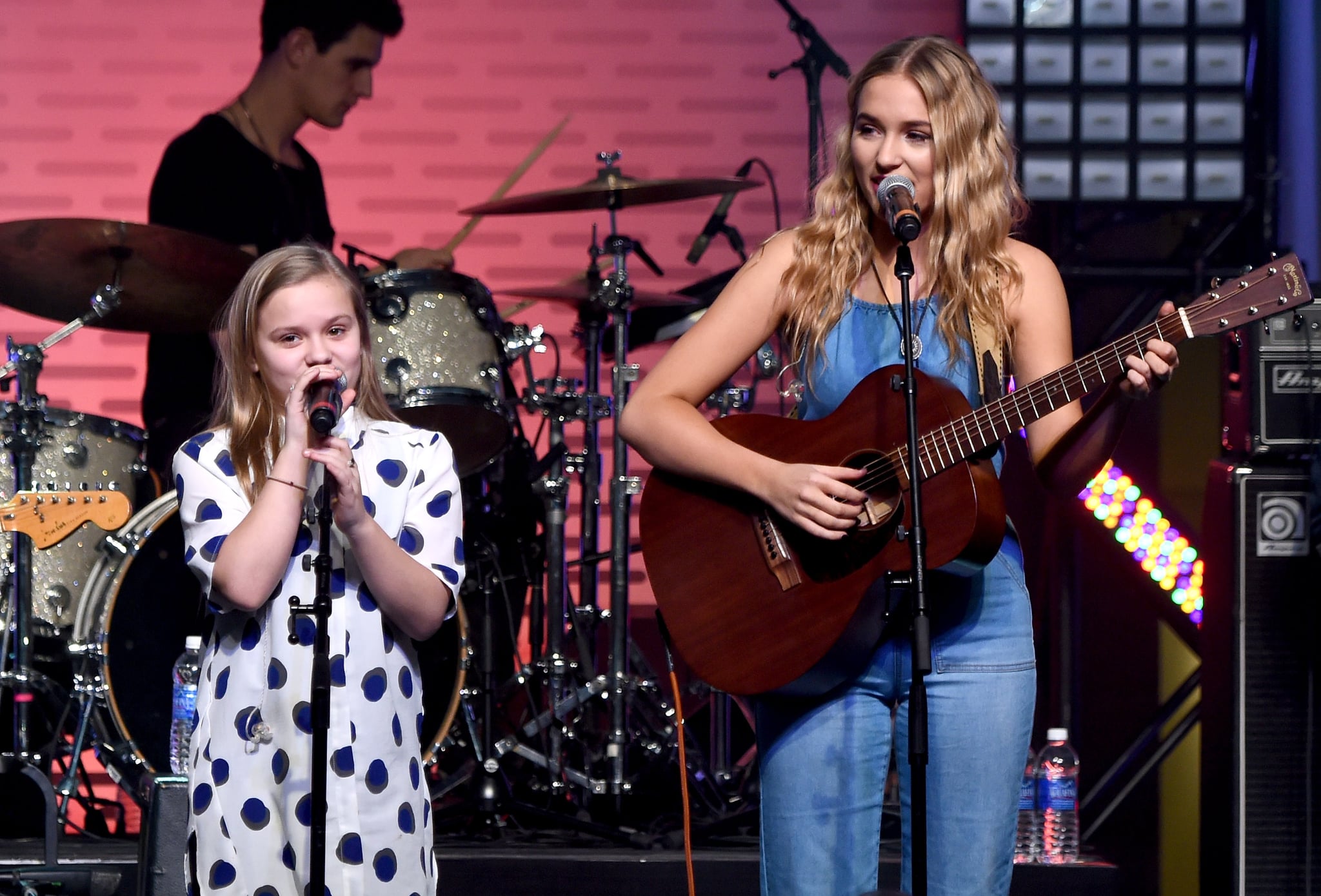 Lennon & Maisy first stole our hearts with their appearances as Maddie and Daphne Conrad on the hit show Nashville, but their sweet sisterhood goes way beyond the screen. At such a young age, the sisters have already gained a huge fan base with their insanely catchy covers on YouTube, their wicked sense of style, and their incredible bond. As the two prepare to release their brand-new capsule collection, Lennon & Maisy for PBteen, POPSUGAR sat down with them to talk all about the show's next season, what they have learned from each other over the years, and their plans for new music in the future!

POPSUGAR: What are you most looking forward to about going back to the Nashville set?

Lennon Stella: Honestly, just seeing everyone and just getting back with the family. We haven't seen them since a bit after we wrapped. We've gotten together a couple times. But I'm really just looking forward to catching up with everyone over Summer.

Maisy Stella: I would say being able to go back to set because it's such a home environment for us. I just feel like I haven't really been home.

PS: How do you think the show will be different now that it's with CMT?

MS: I think it's going to be different with the music. I think the music might be a little bit more country. I think the show in general might have more of a country basis.

LS: Yeah, because it's on a country music television network, it's definitely going to be pushing country music a little bit further. It was so debatable whether or not it was more singer/songwriter and some of the artists on the show, but hopefully they keep some diversity. We also have new writers and new showrunners, so that's definitely going to open a lot of doors.

PS: How will it be the same?

LS: Well, obviously characters. They can't really change that much over a couple months' time.

MS: One thing that will be different is my hair will be short!

LS: My hair is a lot blonder than it was. I also got a nose piercing, so I just hope they let me keep it. I will be so upset if they make me take it out. Hopefully, a lot of the crew will stay the same as well, because we just love them.

PS: The last season was really dramatic for your characters' family; were those your hardest scenes?

LS: For me, honestly, the emotional things like crying is so weird, but it's actually a lot easier for me to do. It's the really angry or superphysical scenes that are more challenging for me. But there were definitely some challenges. Getting really angry or flustered is really hard especially when you're doing multiple takes.

PS: Are we going to see the girls grow further apart or pull together in the new season?

MS: Closer together. I think the Nashville fans are getting too angry. I don't think that they would take their chances on that because everyone is getting very mad about it.

LS: I mean, they've been close and then they separated, and then they've had a long time apart and I feel like now is it's time for them to come together. And the ages are getting to a point where I think they can hopefully relate on more things.

PS: What do you hope your characters do this season that they haven't done yet?

MS: Well, Daphne doesn't really have any friends, like she's kind of a loner. I think there was one scene where Connie was calling Deacon and she was like, "She's at this person's house," but it was like Loretta or something like an uncommon child name, it was really strange. So I think our characters should socialize a bit more.

PS: Is there anyone in mind for who could play your friends?

LS: There's a lot of Disney people that Maisy would probably be good with.

MS: Well, my two really good friends are Maddie and Mackenzie Ziegler, and I think that would be pretty amazing if they come on the show. That would be so fun, because I love them so much.

PS: The show is notorious for having amazing guest stars. Which artist would you love to see appear on the series next season?

LS: My favorite would be Stevie Nicks. I am completely obsessed with her and I feel like there's definitely a possibility. Maybe some Taylor Swift action.

PS: Which guest star did you get the most starstruck over?

LS: I would say Steven Tyler, for me. I wasn't really starstruck, but I was just like, "Whoa. This is Steven Tyler." Also, Elton John. I was definitely starstruck over meeting him.

PS: Who are you closest with on set?

LS: I'm definitely closest with Aubrey, she's like my best friend. We've been good friends since the beginning.

MS: I would say either Will Chase or Keean Johnson.

LS: Oh yeah. I also forget about Keean, because he left last season, but he's one of my good friends.

PS: What's the best part about working with your sister?

MS: Having someone to be like, "What's my line?" We run scenes together, so when I forget my line, Lennon helps me out.

PS: How have you two helped each other grow over the years? What have you learned from each other through this journey?

LS: Maisy reminds me to not overplan things, because she goes with the flow and I need to have things organized.

LS: What about what I teach you Maisy?

MS: Lennon teaches me whenever I'm hanging out with new friends, she tells me to be myself and don't pretend to be anyone else. She definitely makes that very clear to me.

PS: You two have already gained so much success in your career; what is the next thing you would like to achieve?

MS: I definitely want to do movies and come out with an album.

MS: We'll definitely be putting that out soon.

LS: We've been writing a lot and definitely within the next little bit, for sure. It's coming up.

PS: What would you say the tone of the album is?

LS: Indie/pop. It's definitely different than the stuff we do on the show. It's pretty pop, quite frankly.

PS: And you're writing your own music too?

LS: Yeah, it will be all originals.

PS: What are you most excited about the new album?

LS: Well, creating an album is my all-time goal, so I'm just most excited about getting it out there and touring and everything that comes along with it.

Music
Tems Performs "No Woman, No Cry" Live For the First Time at the Global Citizen Festival
by Sabienna Bowman 1 hour ago