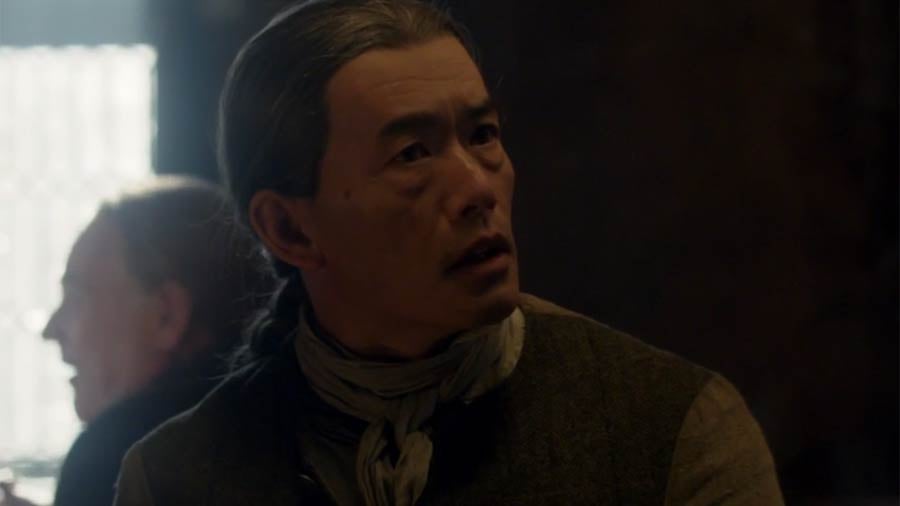 In the latest Outlander episode, the show introduces a divisive character in Mr. Willoughby (real name Yi Tien Cho), a Chinese man who stows away on a boat and ends up in Scotland. When he arrives, he is nearly dead from starvation and doesn't speak the language, but Jamie, being the caring man that he is, helps Mr. Willoughby by feeding and clothing him and helping him be slightly more palatable to the locals by changing his name. It seems Yi Tien Cho sounds very much like a coarse Gaelic word, so Jamie suggests he go by Mr. Willoughby instead.

As Voyager, the book on which season three is based, moves forward, Mr. Willoughby is shown to have a great knowledge of many Chinese practices and customs: calligraphy, pelican training, acupuncture, and acrobatics. He also is a bit of a drunk and has a foot fetish.

Over the years, book readers have had numerous discussions online about how Mr. Willoughby seems to be an amalgamation of various Chinese stereotypes and basically serves two purposes: to cause trouble for Jamie and to cure Jamie's seasickness with his acupuncture. Suffice it to say that Mr. Willoughby is not one of the more fleshed-out or three-dimensional characters in the books, though his antics (and acupuncture) do play a key role in the plot of Voyager from here on out.

He is obviously a tricky situation for the show's writers. Executive producer Maril Davis told me at the 2017 Summer TCA press tour that they did consider omitting Mr. Willoughby altogether.

"There was a ton of discussion about Mr. Willoughby, because I love Mr. Willoughby, but I totally recognize that there is some very offensive stuff in the books," Davis said. "We talked so often about how are we going to deal with this and still be able to include him? Because it felt like a loss not to."

In the end, the writers decided to "strip away some of the things [they] found uniquely offensive," like his "obsession with feet, the fact that he didn't speak English very well," and focus on the relationships between the characters.

"There's more of a sense of respect between Claire, Willoughby, and Jamie, that's a really unique relationship," Davis explained. "We wanted to keep him in, but strip some of that stuff away because he has such an interesting story. We wanted to be true to the fact that he still would not have been accepted in Scotland or among the people he's traveling with, so we wanted to be true to that and hopefully show it in a way that's not gratuitous and incredibly offensive."

For author Diana Gabaldon's part, she told the Scotland Sunday Herald in an interview earlier this year that Mr. Willoughby is based on the story of a Chinese immigrant known as Mr. Hu, who mysteriously arrived in Edinburgh in the mid-18th century.

"No one knew how he got there — whether he had stowed away, been kidnapped or whatever. He couldn't speak English — and he never would speak English as he was so traumatized by being in the midst of these barbarian strangers," Gabaldon told the newspaper. "People felt sorry for him as he was at such odds and so isolated, and would give him food and places to sleep and clothes to try and help him. But he just could not make connections anywhere and he finally drank himself to death."

Gabaldon said it was this "tragic story" that inspired Mr. Willoughby, because it caused her to "think of cultural isolations and perceptions and so forth."

And executive producer Matthew B. Roberts told a group of reporters on set a year ago that it all comes down to making the best story possible. "[Controversy is] for the fans and the press and for people to discuss. We're always just going to strive for good story. . . . We just have to go, 'This is the best way we can show it and this is the best way the actors can portray it' and we go forward with that."