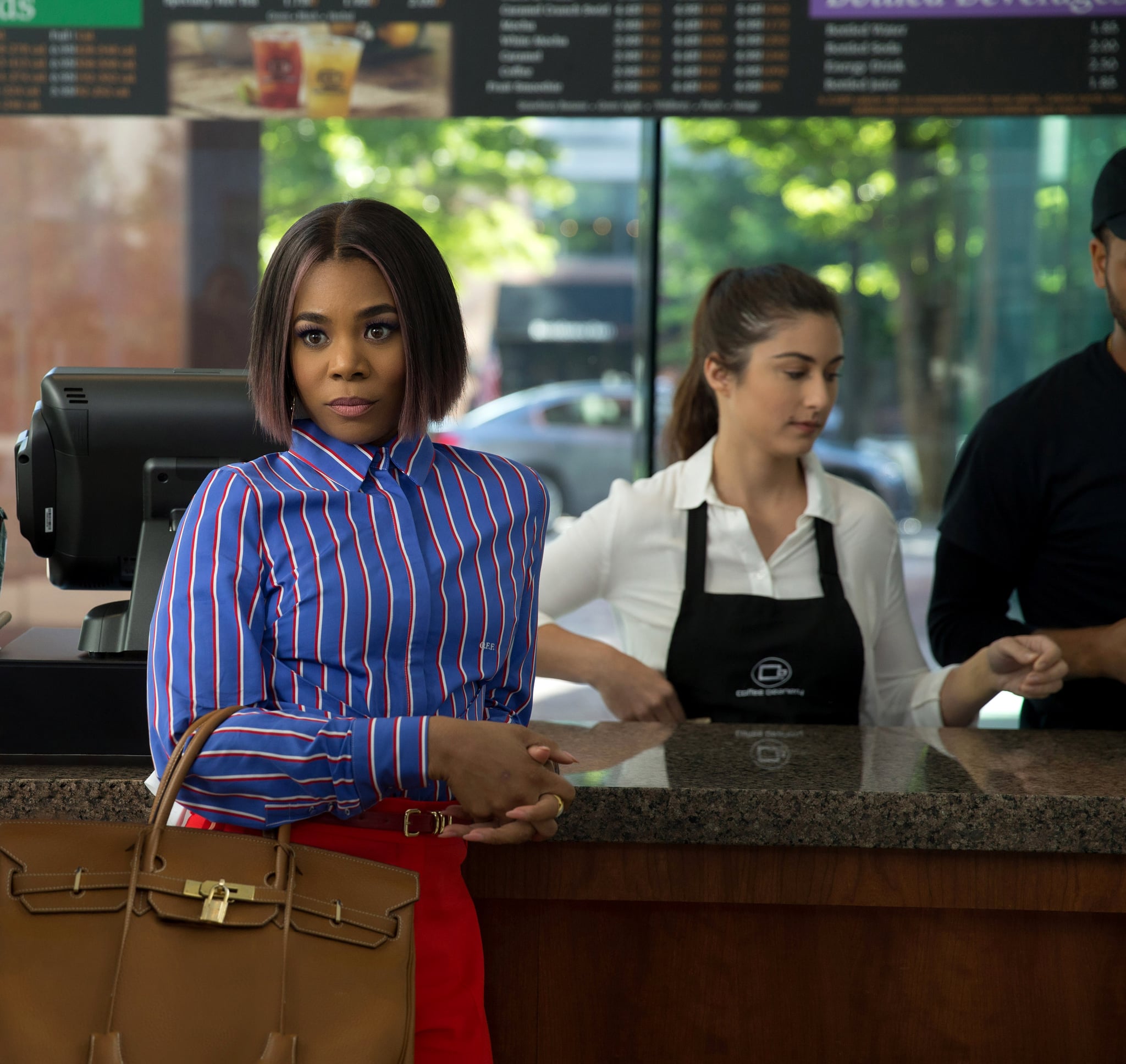 There have been many horrible bosses in movies that have shaken us to our very cores (looking at you Priestly), but it's safe to say that Little's Jordan Sanders takes the cake. Played to perfection by Regina Hall, Jordan starts her day terrorizing everyone, from her next door neighbor to local baristas and her own long-suffering assistant, April (Issa Rae). In a very The Devil Wears Prada-esque moment, April actually tries to warn her colleagues that Jordan is on her way, but there's no hiding from the boss when she wants to find you. And Jordan's anger is like a heat missile, constantly aimed at her terrified employees.

Her reign of terror is abruptly cut short when she meets the business end of a wand and wakes up in the body of her 13-year-old self (played by executive producer Marsai Martin, age 14). A modern reversal of the classic 1988 comedy Big, the film follows a similar formula with twists and turns unique to Martin's vision. Young Jordan has to deal with everyone treating her like a child again and the struggles that come along with adolescence — relentless bullies. Even though she's been on the other side of the bullying for the last several years, it's still hurtful when it's at her expense, and the experience takes her on a journey of discovery and self-acceptance.

For Hall, the role of Jordan joins a long list of comedic characters that are outrageously funny. When I hopped on the phone with the Girls Trip actress, she admitted that fans still throw out quotes from Scary Movie's Brenda when they see her, and I have a feeling that she'll be hearing Jordan's vicious — but hilarious — insults soon enough. Keep reading for more on Hall's role in Little, what it was like hanging out with Issa Rae, and what her favorite part of playing the "Boss B" character is.

POPSUGAR: I really enjoyed the movie, and it's kind of like this generation's funnier, more modern and feminine take on Big. Were you a fan of that movie and why do you think fans of Big will appreciate Little?

Regina Hall: Well, I'm a huge Tom Hanks fan. I mean, Big was great and I just think Tom Hanks was so brilliant in that movie comedically. I think everyone will take something different from the movie and, hopefully, they will enjoy it. I hope people will go see the movie and they'll laugh and have a good time. [Little] is about that fantasy, if you could go back for a few minutes or a few days, and that was the funniest thing to me and what was funny about its characters.

PS: If you could go back in time to any age, what age would you go back to?

RH: Maybe 15, when I first had a job and when I had all my friends! That was fun.

PS: An iconic time, adolescence. Was there any scene in particular that was hard to get through without breaking? Because it was hard to not laugh out loud just watching you guys.

"I think it's really important that she believed in herself, and I love that."

RH: Well, it was hard to get through the speech with all the employees and not laugh, you know? I was yelling at everyone and pushing them into walls and knocking on their heads. That was kind of hard to do without laughing. [laughs]

PS: Speaking of, Jordan is super tough, which is understandable considering she's a woman in a male-dominated industry. Did you pull from any other iconic mean bosses for your performance, whether in movies or in real life?

RH: You know what I honestly think? I think we're always pulling, because I feel like I'm always watching people and listening to stories and hearing things. But for this one, I thought of what would be my worst nightmare in a boss and tried to create that, but still make her likable. Because you do have root for her the whole movie, but you've also got to understand why she had the need to go "little."

PS: Of course. Was there something about Jordan that you identified the most with? What do you think is important for viewers to understand about her character?

RH: I loved that she didn't take no for an answer and had so much tenacity and fortitude, even when she got her first no. Ultimately, I think it's really important that she believed in herself, and I love that. Being an actress, you get a million nos before you get a yes and you kind of have to always move forward, even when someone doesn't think you're right or doesn't think you're good enough or pretty enough or tall enough, whatever it may be. So I appreciated seeing Jordan in her world where she's always having to prove herself. And I kind of love that she had learned to navigate that world, especially since we don't see a lot of women in the tech industry. I love that she loves science. I loved that she continued to embrace that part of her. 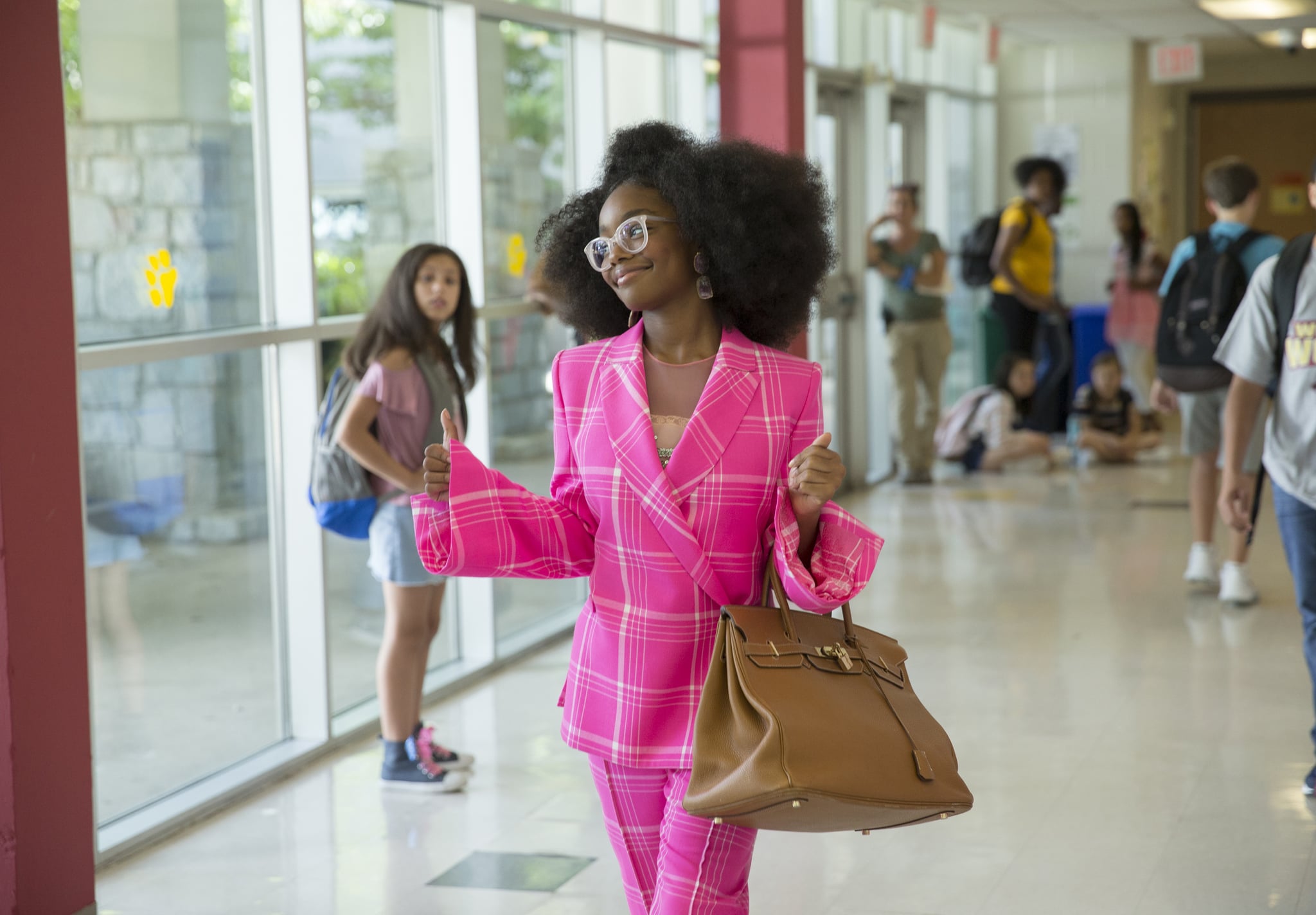 PS: That was actually one of my favorite aspects of the movie, Jordan being in the tech industry and coming up with really innovative ideas like the personal assistant, Home Girl. Were you involved in any of the tech ideas or evolution of her character?

RH: Home Girl was already in the script, but I loved the idea of Home Girl. I loved the physical aspects of Home Girl's device and what it looked like. And thank you to Tracee Ellis Ross who did the voice for Home Girl! But yeah, I loved that idea and I loved the name. I loved that it was called Home Girl, which is like your virtual reality friend. For me, all those things mattered and I wish I had pitched it, I wish I was a tech-savvy girl! But I think showing Jordan in that world and being a pioneer in that world is just such an important symbol. I totally supported that.

PS: Oh, absolutely! And what is a great piece of advice you've been given that you would pass on to women like Jordan, or women trying to make their own dreams come true?

"It's nice to get validation, just remember it's your work that's most important."

RH: I think I remember, well this one's for acting, but I guess it'll be the same thing. I remember my publisher said — and I can't remember it exactly — but basically it was, "Don't let your press proceed your work." Meaning, make sure you do your work before you look for accolades and press. Sometimes it's nice to get validation, just remember it's your work that's always going to be most important. I wish I could think of the exact quote, and I'm sure I will as soon as I hang up, but I just remember it was very sound advice for me to not focus on that portion of entertainment. And it always made me think to perfect my craft.

PS: That is incredibly sound advice. I wanted to ask about your dynamic with Issa Rae, because your chemistry with her is palpable and it seemed like you guys really had a great time on set. How was it like working with her?

RH: We just had fun, you know what I mean? Issa and I knew each other for a year before this movie and off screen we wanted to work together and tried to create some other things. On set, we'd give each other lines like, "Ooh, this might be fun to try" and "Maybe say this or try that." I first saw her in Awkward Black Girl, and her just going from that and then onto Insecure, I think she's living advice for the next generation and I have such tremendous respect for what she does. We have fun together and we had a lot of fun working together for Little.

Related:
Little: Marsai Martin on Why She Casted "Boss B" Women Regina Hall and Issa Rae

PS: And what was your favorite scene to shoot?

RH: You know what was really fun to shoot? The driving scene. I kind of like the idea that Jordan just almost caused an accident and weaved into traffic. It was interesting because we did a portion of it in front of a green screen and a portion of it live, so it was oddly fun.

PS: Oh, I thought you were just really whipping through the streets like that.

RH: No, no, there were stunt folks doing that and it was kind of fun. I wish I could whip through the streets like that!

Little is now in theaters.