Rogue One: A Star Wars Story is coming, whether you're ready for it or not. The spinoff is set for a Dec. 16 release, meaning your holidays are going to be very jolly. Felicity Jones, Diego Luna, and Mads Mikkelsen are all in the cast, and wehave a handful of details about what to expect. The brief rundown: the plot will center on a group of Rebels who are attempting to steal the original Death Star. Darth Vader is involved, as is another villain, played by Ben Mendelsohn.

Related:
Over 50 Ridiculously Gorgeous Pictures From Rogue One: A Star Wars Story

Related:
Star Wars: What Exactly Does "Rogue One" Mean Anyway? 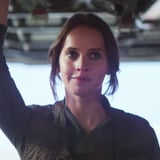 Don't Panic, but a Whole Bunch of Rogue One Behind-the-Scenes Footage Was Just Revealed
Movie TrailersMoviesRogue One: A Star Wars Story