Ever think about what it would be like if Parks and Recreation's Ron and Leslie made out? Probably not, but you will now. The cast came to PaleyFest in LA this week to chat about their long-running show, and they revealed a rather off-putting secret: Nick Offerman and Amy Poehler's characters Ron and Leslie make out! And they have made out more than once! Before you have a heart attack, keep reading. 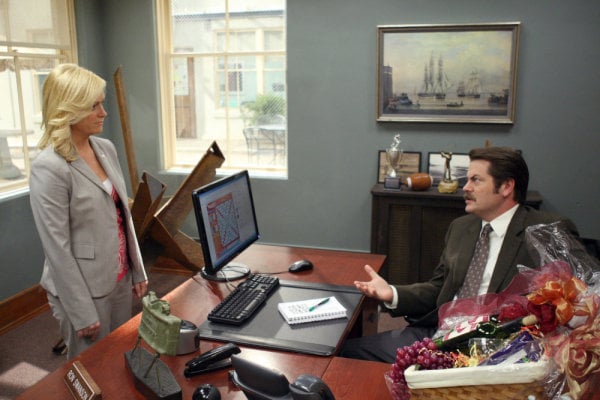 Creator Mike Schur was talking about the lovely friendship that Ron and Leslie have, and that when they were creating the characters, the writers felt that the dynamic was that Ron was the "stern but loving dad" and Leslie was the "loving mom" to the rest of their co-workers. When Schur off-handedly remarked that "they were not romantic options for each other," Poehler giggled and admitted, "Every year Nick and I do a scene for the gag reel where Leslie and Ron make out." So why haven't we seen this clip yet? Schur clarified that "We never put it on the gag reel because it’s superdisturbing."

Image Source: NBC
Parks And RecreationTVPaleyfest
Around The Web