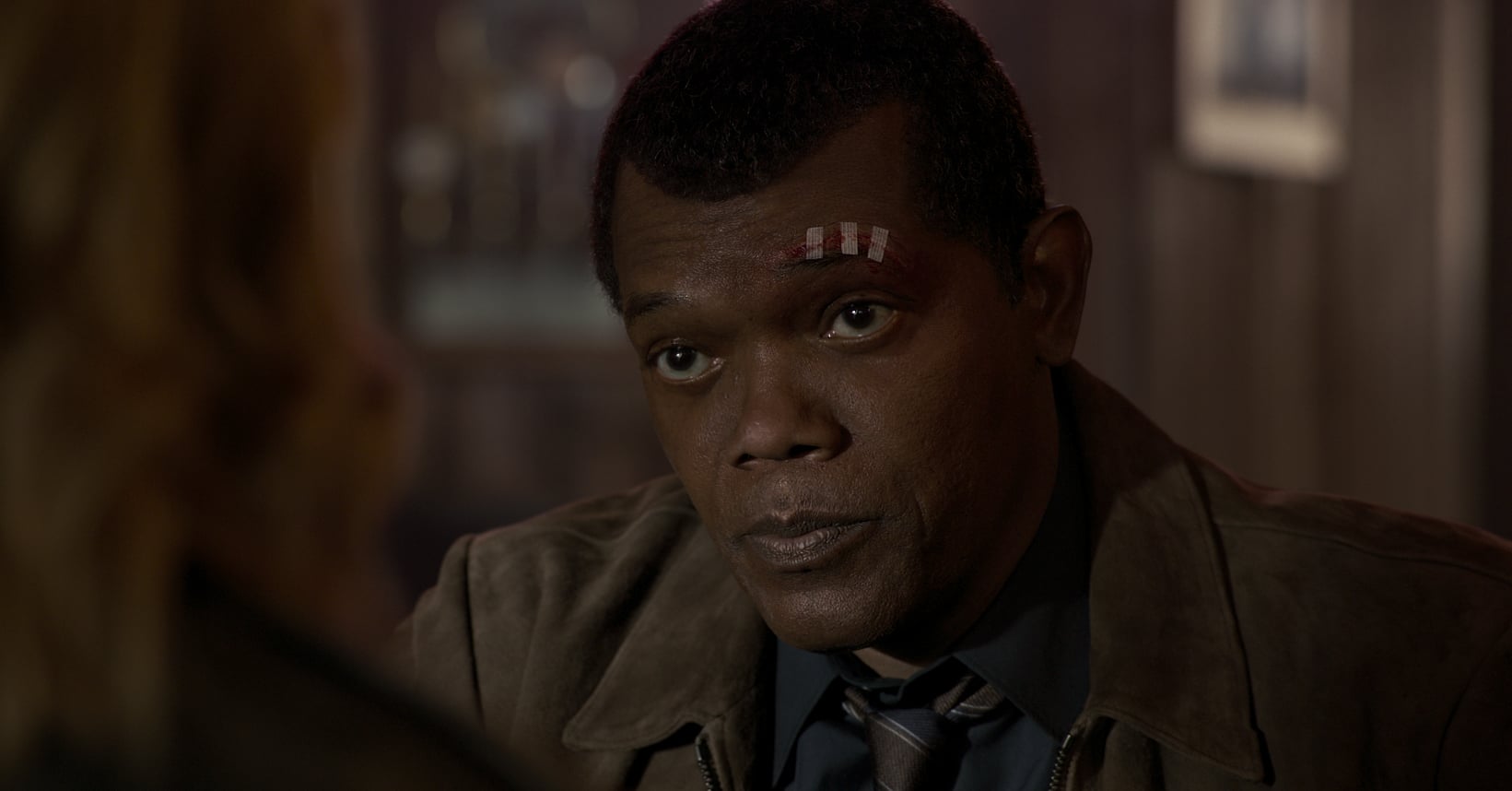 The buzz is building as we close in on Marvel's next big release. Captain Marvel will be a major benchmark for the cinematic universe, and it just so happens that it's the final film before we witness the harrowing glory of Avengers: Endgame. Speaking of Avengers, we should have known the one and only Nick Fury would pop up in Captain Marvel. After all, he's the one who pages Captain Marvel in the postcredits scene for Avengers: Infinity War, signifying that he and this mysterious new hero have a history. The real question is, what kind of role will Fury play in the film?

Over the Summer, POPSUGAR visited the Captain Marvel set, where we got to sit down for an interview with Samuel L. Jackson, the man behind the eye patch. After the first question ("Tell us about Nick Fury in this film"), he said, "No! Trying to get me fired. I don't even know how this works. What am I allowed to say?" Don't worry, though, he eventually opened up and gave us a few juicy details about what we can expect.

As it turns out, we're going to encounter quite the different Fury this time around. The film takes place in 1995, a solid 15 years before his first appearance in Iron Man. That means, behind the scenes, Jackson undergoes a pretty incredible digital de-aging process. And as for Fury himself? Jackson told us Nick has been "riding the desk at SHIELD" when we meet him in Captain Marvel, which sounds like he's been stuck with lame grunt work.

But the real interesting aspect of his character is that he's not going to be quite as, well, gruff as he is later on. "[He's] not as cynical just yet. Things are changing, the world is changing for him, how he views it in terms of who we are in respect to the rest of the galaxy," he said.

Then Jackson revealed something even more exciting: there's a strong chance we're going to see why Fury wears an eye patch at all times. "I guess you'll see the origin of what happened to his eye. Possibly," he said with a coy grin. "You'll find out that he does have family that's referenced in another way. There are things we talk about, there's back story we haven't talked about before, where he's from, what he's done. There's an element, there are times when he actually humanly reacts to things with fear and awe, instead of the stone face that he normally has."

Sounds like Fury might have some pretty intense encounters this time around, no? As a final note, one journalist asked Jackson if he learned any new facts about the character while he was working on this film. "That everybody calls him Fury," he said. "Even his mother." To use a phrase that Jackson himself might have used at some point or might still use in the future, he sounds like one badass motherf*cker.