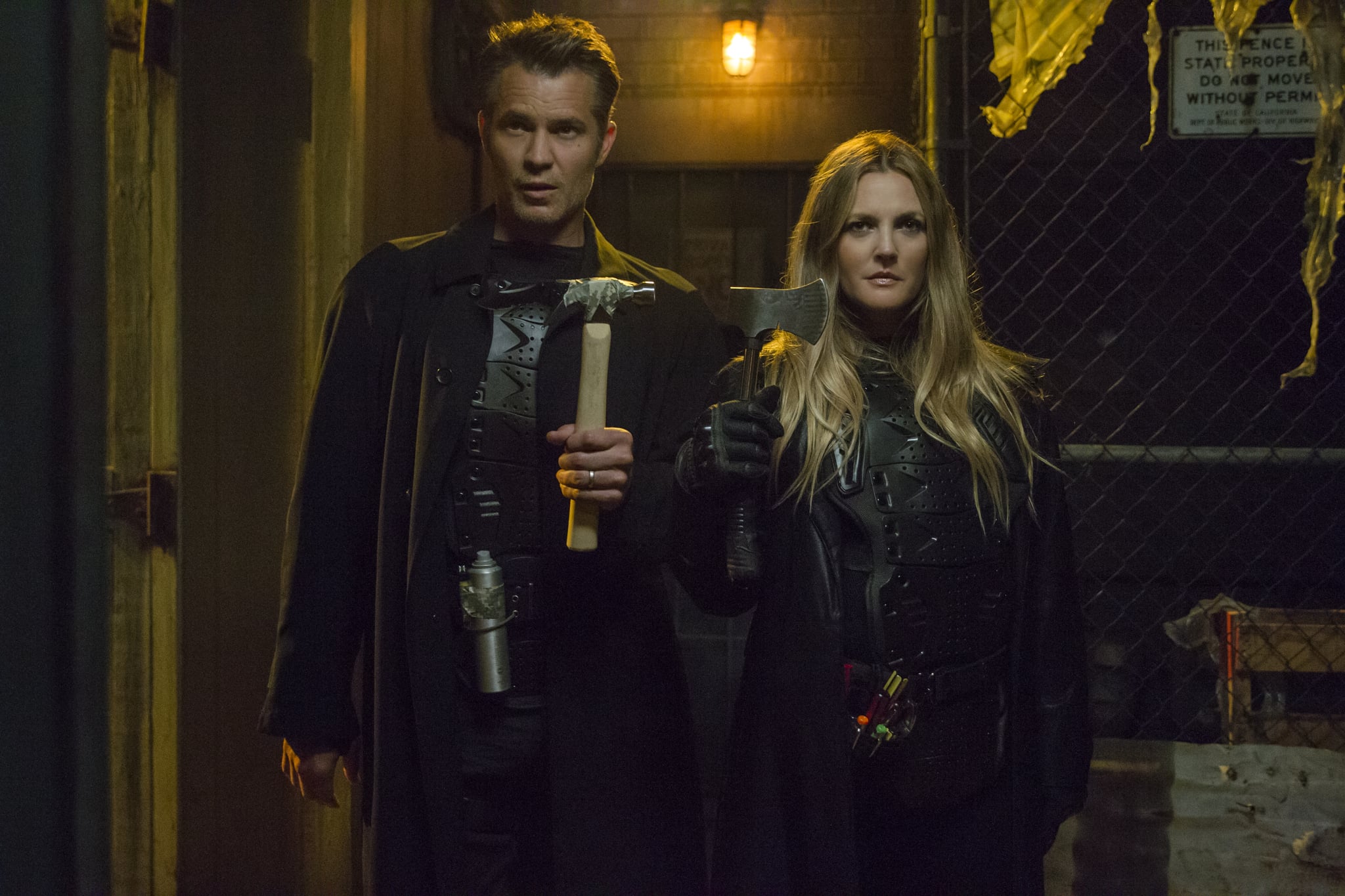 Some TV shows are best snacked on rather than enjoyed in a multihour binge. They're the kinds of shows you can have on while you do the dishes and scroll through Twitter, you know? If you're in need of a new program to fit that void, Santa Clarita Diet is likely exactly what you're looking for. Upon initial inspection, it doesn't seem like it's a show that should work. A gory (and I mean, gory) zombie story wedged into a suburban family comedy sounds just complicated and high-concept enough to be a disaster waiting to happen. Fortunately, at its home on Netflix, Drew Barrymore and Timothy Olyphant's oddball foray into the world of 30-minute sitcoms ends up molding itself into more than just bloody, shapeless pulp.

Barrymore stars as suburban real estate agent Sheila, who has found herself, and her marriage to devoted husband and high school sweetheart Joel (Olyphant), in a rut. Then, following a sudden and vomit-heavy transformation, Sheila realizes she's become a walking, talking, cognizant member of the undead (more iZombie than The Walking Dead). After figuring out that her craving for flesh can't be sated by raw chicken or ground beef, she and Joel find themselves traveling down a gruesome road of gore that will leave your stomach turning. In the first episode, for example, Sheila relieves a predatory co-worker (one of many great cameos) of his fingers and intestines while he attempts to force himself on her in their pristine, green backyard. To say Barrymore really goes for it would be an understatement — she gleefully gnaws on stray limbs, ripping at skin and squirting blood in all directions, all while maintaining a loopy grin. 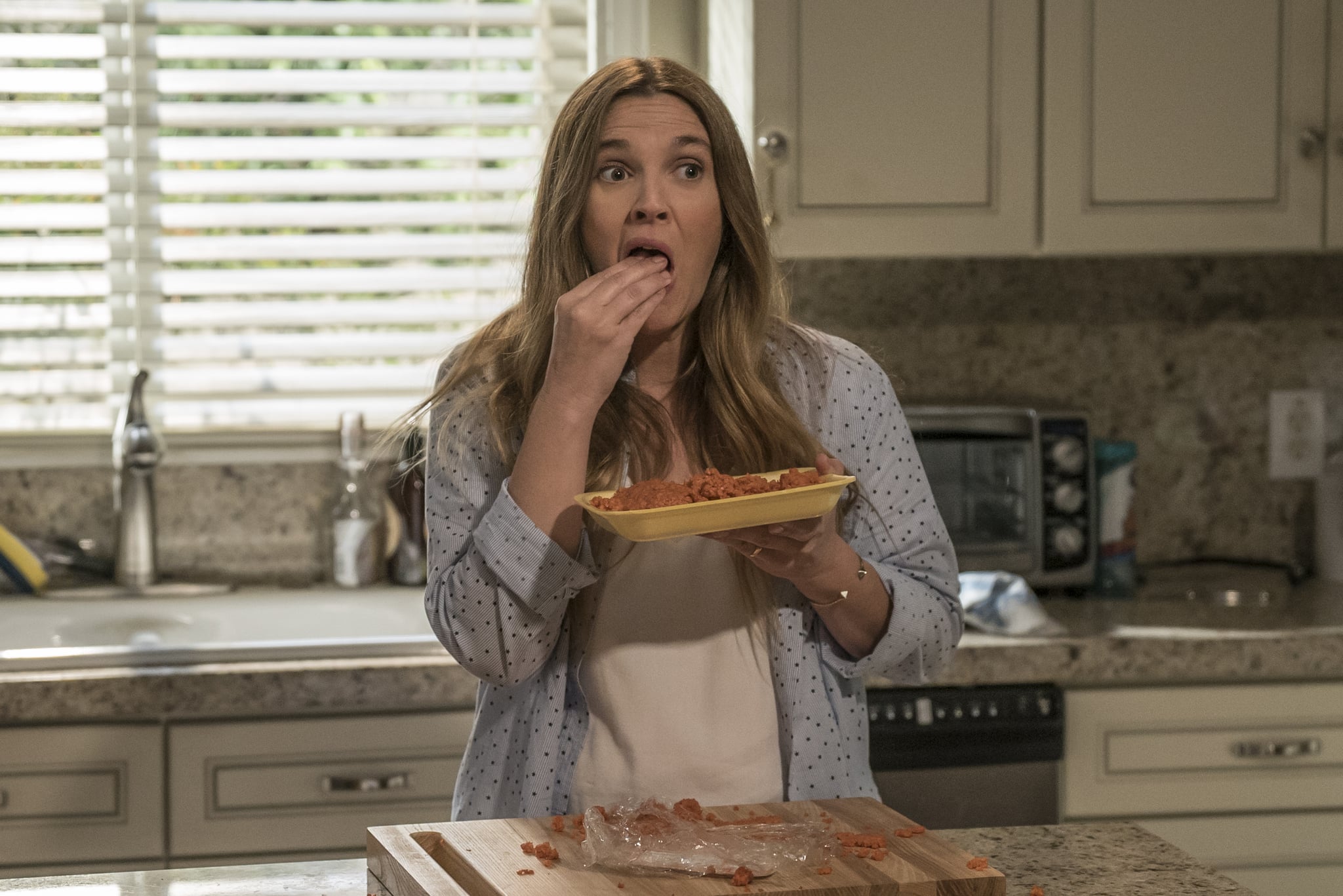 That campy balance between being too bloody and being too silly is one that Santa Clarita Diet never quite masters, but it's enjoyable anyway. It might be shallow fun, but it's fun nonetheless thanks to jokes that come easy and a believable, delightful chemistry between Barrymore and Olyphant (whose comedic timing is vastly underrated, FYI). Though there isn't much depth to it, there is a bit of heart. Sheila and Joel are parents to high schooler Abby (Liv Hewson), who they fill in on her mom's secret. Their continuing back and forth about how to handle becoming serial killers and being good parents has its funny and heartwarming moments ("I know we have to kill somebody today, but we have to be parents every day," Sheila tells Joel in a later episode).

Unlike The Walking Dead — which prides itself on being a show about people who encounter zombies rather than a show about zombies with some people thrown in — watching this can sometimes feel like all blood, all the time. Luckily, each episode only runs between 26 and 29 minutes, which helps to ease the stumbles the show takes before finding its rhythm in later episodes. Once Sheila fully embraces her new identity, she actually ends up being one of the most empowered female characters on TV. With Joel reluctant to help her stalk and kill her dinner, Sheila takes it upon herself to do the heavy, violent lifting while still making time for their daughter. Is Santa Clarita Diet for you? Maybe not, but we can bet that it's more satisfying and hilarious than whatever diet you're on right now.