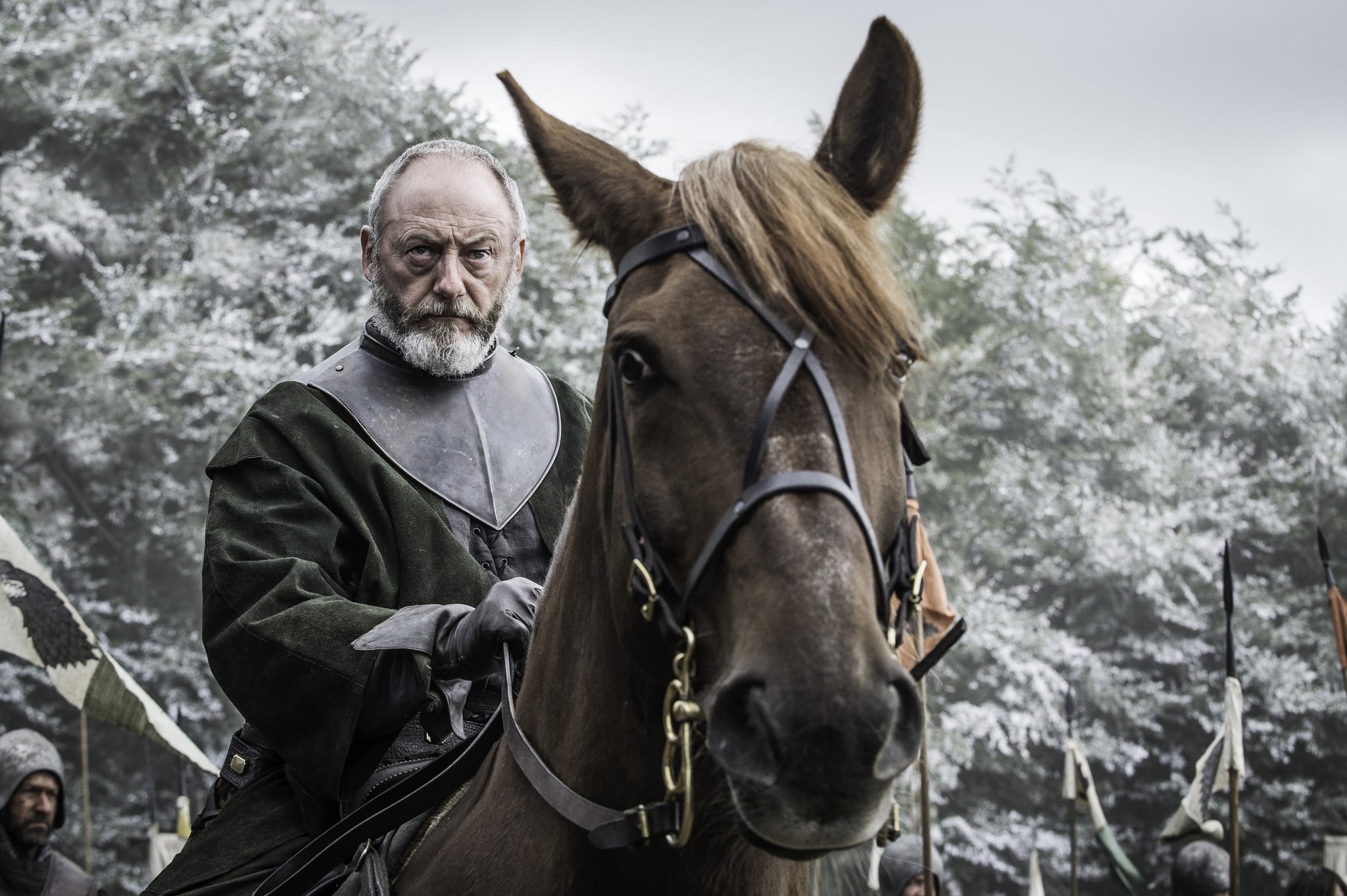 Between seasons of Game of Thrones, we've obsessed over theories predicting the secret savior of Westeros. Could it be Jon Snow — nay, Jon Targaryen — who might unite the Seven Kingdoms and defeat the White Walkers? Or might it be his fiery aunt, Daenerys? Hell, it might even be Sansa or Arya Stark, according to the theories we consume so ferociously to fill the void. But all this time, we've been overlooking some serious foreshadowing about one unexpected character: lovable Ser Davos Seaworth, the Onion Knight.

According to an utterly convincing Reddit theory by Redditor FollowTheBeard, Davos may be Azor Ahai, or the "Prince That Was Promised." We know, crazy, right? After spending six seasons supporting another man (Stannis) who claimed to be Azor Ahai, it seems wild that it may have been Davos himself all along who can fulfill this ancient prophecy. But hear us out; the Easter eggs that have been strewn throughout the series, when combined, make an excellent argument for Seaworth as the Prince That Was Promised.

In typical Reddit fashion, FollowTheBeard's full theory begins with a succinct explanation for skimmers: "TL;DR: Davos drew Lightbringer from the fire. Davos was reborn amidst salt and smoke under a bleeding star. Davos resurrected Jon Snow and woke the dragon from stone. Davos is the savior that will protect the world from darkness. Davos is the Prince that was Promised."

"Davos is the savior that will protect the world from darkness. Davos is the Prince that was Promised."

Each of these moments, wherein Davos merely blends into the background, not focusing on his own exceptional qualities in favor of serving a greater good, add up to foretell the Onion Knight as an unexpected savior.

First, explains the internet theorist, is Davos's early encounter with a flaming sword. At the beginning of season two, Melisandre proclaims: "In the ancient books it is written that a Warrior will draw a burning sword from the fire, and that sword shall be Lightbringer. Stannis Baratheon, Lord of Light, your sword awaits you." While Stannis ceremoniously withdraws a sword from the flames, Davos observes from the background; after the pomp and circumstance ceases, the knight walks over and picks up the formerly flaming sword himself, casually walking away with it.

The next piece of evidence is part of the prophecy, which predicts that "When the red star bleeds and the darkness gathers, Azor Ahai shall be born again amidst smoke and salt." Now, recall the conclusion of season two, when Davos and his navy are bombarded by Tyrion's Wildfire in the Battle of the Blackwater. The entire fleet is destroyed, and most of Stannis's soldiers perished in the battle . . . most, except Ser Davos. FollowTheBeard goes on to explain:

"Water is used pervasively in literature as a metaphoric mechanism of cleansing and rebirth. Fire is also widely used as a symbol for rebirth, renewed life, burning away corruption, etc. Davos 'comes back to life' in the Season 3 premiere as he wakes up on an island, rescued by Salladhor Saan, who even says:
'You've only just come back to life. Stay alive a little longer, my friend.'
Thus, Davos is reborn amidst smoke (wildfire) and salt (seawater). The metaphorical implications of Davos's rebirth can be thoroughly examined, but that's for another post."

Finally, Azor Ahai is foretold "to wake dragons from the stone." While Davos certainly hasn't interacted with any massive reptilian beasts a là Daenerys, he was in the room when Jon Snow (who we now know is a Targaryen) was resurrected atop a stone slab. According to this theory, it was no coincidence that Davos was the only one present when Jon awoke from death:

"During the resurrection scene, Jon Snow is laid out on a stone slab. Melisandre performs the ritual and . . . nothing happens. Tormund leaves, Melisandre leaves, Edd leaves. Only Davos stays. He lingers, as seen from this clip here. He approaches Jon, internally begging, pleading, willing, praying for his return. Shortly after, Jon gasps his first breath.
The delay between the ritual and first breath was not a dramatic pause. Melisandre did not resurrect Jon Snow. She never believed she could, nor did she have any faith left in the cause. Davos did. Davos, not Melisandre, brought Jon Snow back to life. Davos woke the dragon from stone."

These three pieces of evidence, along with Ser Davos actor Liam Cunningham's cryptic hints about knowing a secret straight from George R. R. Martin himself, are quite convincing. We'll definitely be playing close attention during season seven for more indicators that Davos is actually intended to save Westeros, not just serve it.

Not bad for a former smuggler who recently learned how to read, eh?