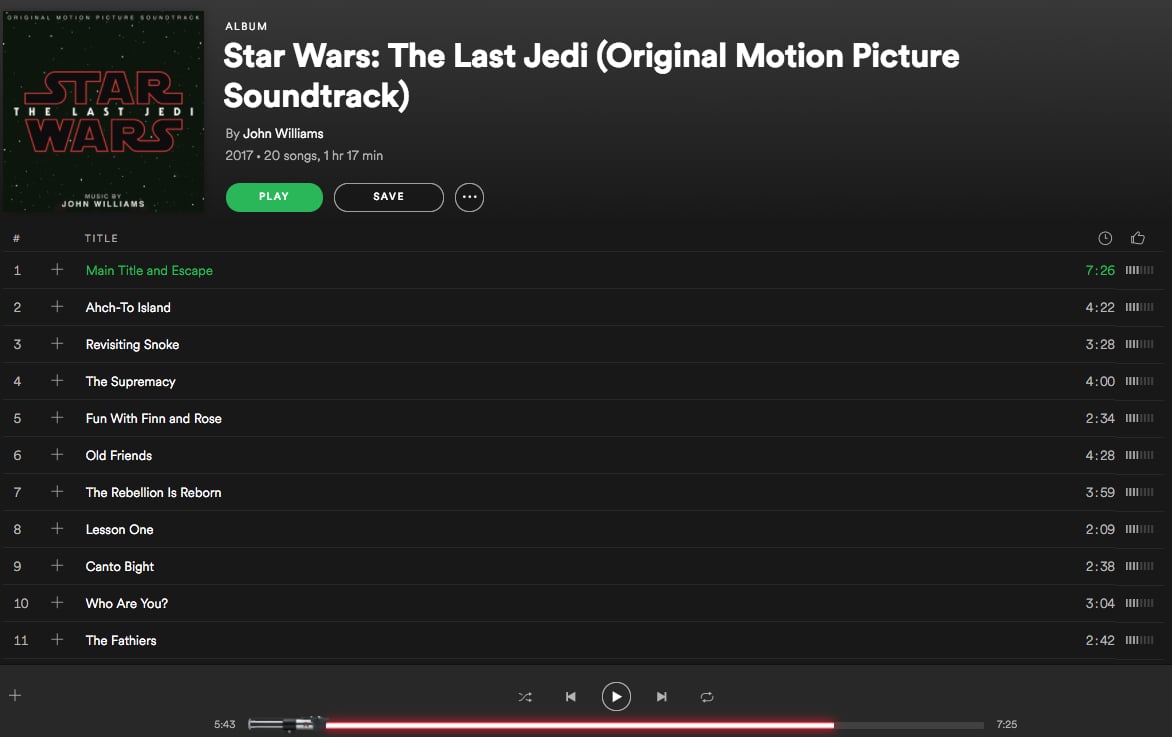 In order to hold me over until the next time (and the next, and the next) that I watch Star Wars: The Last Jedi, I naturally turned to Spotify to listen to the soundtrack on repeat. At first, I thought there was a glitch on my screen. But lo and behold, as the song progressed, I realized that instead of a glitch, I was seeing a small Star Wars Easter egg that subsequently made my day.

When you play The Last Jedi's original soundtrack on the streaming service, your progress bar at the bottom slowly but surely turns into a lightsaber as the song goes on. Spotify added this awesome feature for The Force Awakens and Rogue One, but if you're late to the game, don't worry. You can spot the Easter egg while you relive the film listening to the score. The lightsaber shows up for all of the original soundtracks, too, so go all in if you're a true fan.

Related:
23 Perfect Gifts to Give Your Porg-Obsessed Friend on Star Wars Day

It appears the lightsaber options vary in color — mine was red no matter which soundtrack I played (which, I mean, for me, is fair), while another fan had a blue lightsaber for all. Either way, this effect is definitely a nice touch.

ADVERTISEMENT
SpotifyStar WarsMoviesStar Wars: The Last Jedi
Around The Web

Nostalgia
Welcome to 2020, Mr. Banks! The Father of the Bride Cast Reunited For a Surprise Zoom Wedding
by Perri Konecky 14 hours ago

Netflix
The Trial of the Chicago 7: See How the Movie's Cast Compares to the Real People
by Amanda Prahl 16 hours ago

Halloween
In Case You Were Curious, Here's What the Halloweentown Cast Has Been Up to Since 1998
by Monica Sisavat 18 hours ago