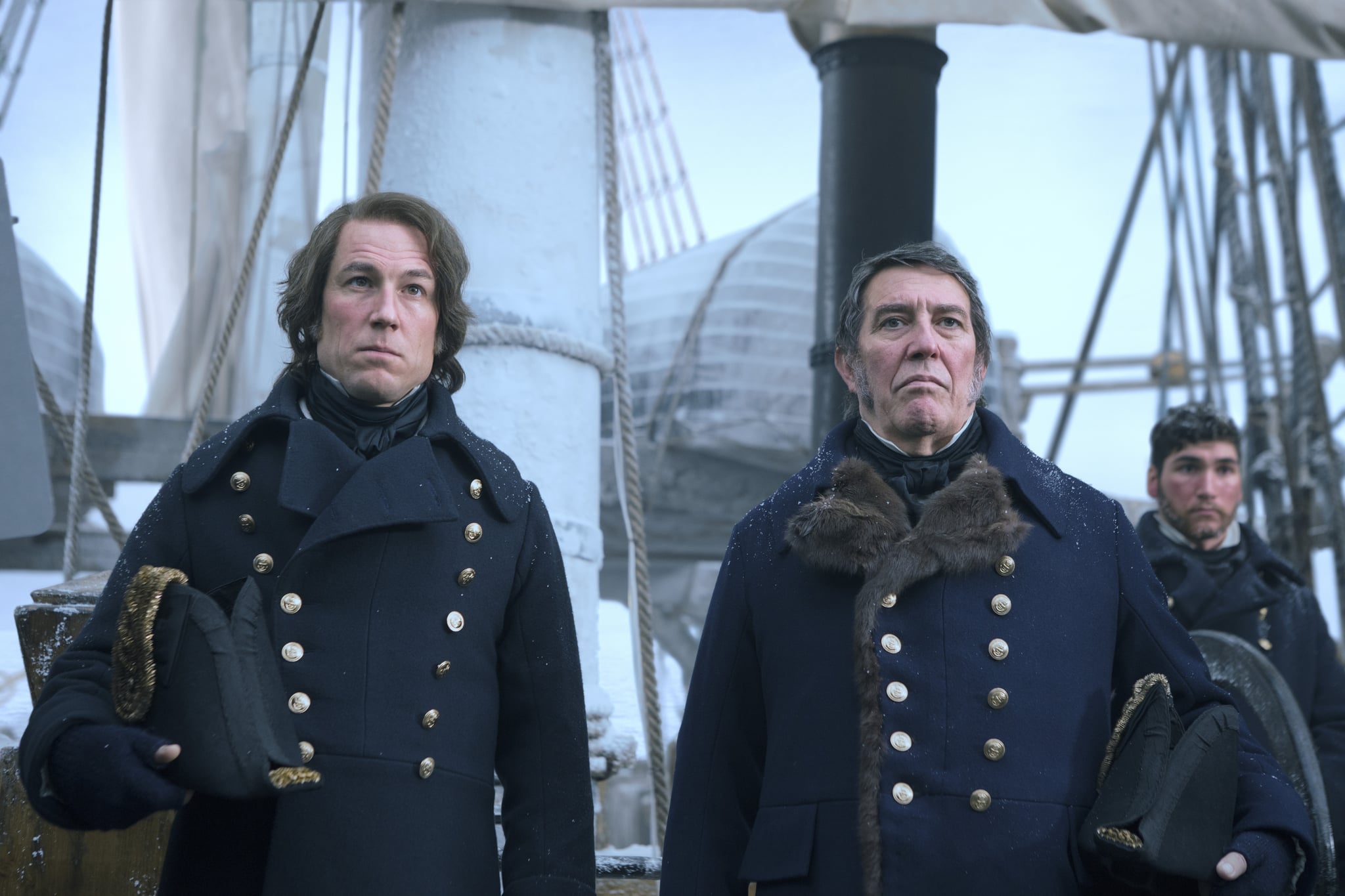 The premise for the Ridley Scott-produced new show on AMC, The Terror, is the stuff of frigid nightmares: two technologically advanced Royal Navy ships sail from England to the Arctic in an attempt to finally discover a navigable passage through the Northwest Passage in the 1800s but end up stuck in the North Atlantic, turning their journey into an icy, survivalist hell. Oh, and lest you think it's just a colder version of Master and Commander, there's also a bloodthirsty monster roaming around. See what we mean about nightmares?

While the supernatural twist in The Terror is a haunting one, what's even more, well, terrifying is that the show — which is adapted from Dan Simmons's acclaimed historical novel of the same name — is actually based on a true story. Apparently the truth is not only stranger than fiction, but also far more horrific. Clearly creators and showrunners Soo Hugh and David Kajganich had no shortage of material to work with when bringing the story to the small screen.

Although the true story of the two ill-fated ships, the H.M.S. Erebus and H.M.S. Terror (most ominous ship names of all time? Jeeze!), lacks the appearance of a vengeful ice monster, they indeed got stuck in the North Atlantic ice in 1845 while on a similar mission to explore the Northwest Passage. Not only that, but the major players are also the same: Captain John Franklin and Francis Crozier, who are portrayed in The Terror by Ciarán Hinds and Jared Harris, were the real leaders of the doomed 19th century sea voyage.

There were 129 members of the expedition, all of whom disappeared virtually without a trace. The only clue as to their whereabouts other than a few skeletons was the wreckage of the two ships, which wasn't actually uncovered until more than 150 years later. Rumors about what could've happened to the men swirled for decades, which is what no doubt inspired Simmons's occult version of the strange tale.

So, what really happened to the men of the H.M.S. Erebus and H.M.S. Terror? 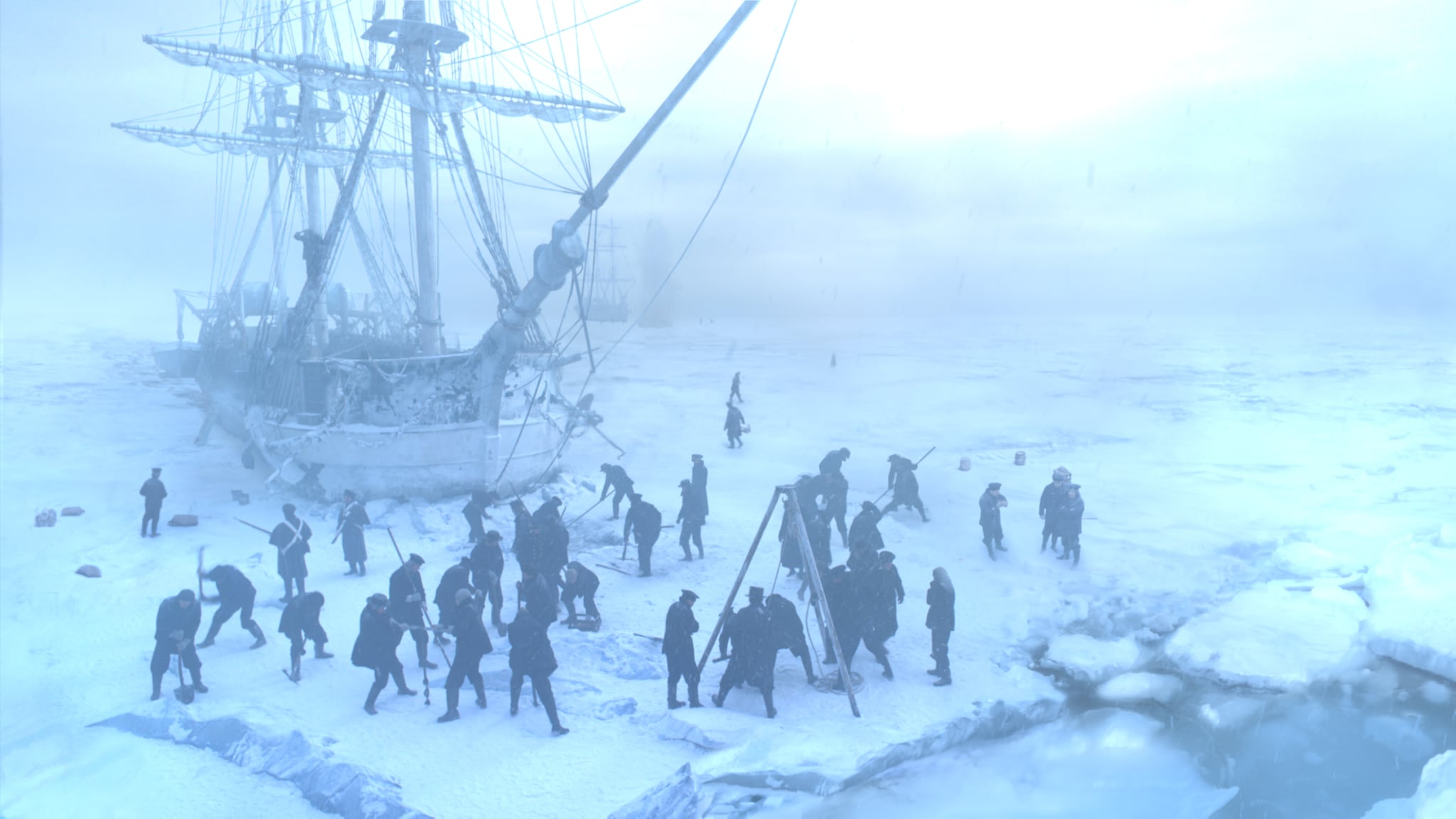 In May of 1845, Franklin and Crozier navigated the two ships from the UK to the Arctic's Northwest Passage along with their officers and crew. Franklin, though respected, was nearing 60 years old and wasn't the Navy's first choice; instead it wanted famed explorer William Parry or Naval officer James Clark Ross, both of whom refused to go. Eventually Franklin was given the post, and Crozier, an officer from Ireland who'd successfully journeyed to Antarctica with Ross, was dubbed his second in command. They were last seen by European whalers in Baffin Bay — an area between Greenland and Canada — awaiting good conditions to enter the Arctic labyrinth, as The Terror notes in its chilling title card. Then they vanished, despite Franklin and Crozier's experience.

Given their high-profile voyage, multiple search parties were sent out when no word had been received from the men by 1847. Over the next 12 years, more expeditions traveled in the Erebus and Terror's footsteps in hopes of finding any scrap of information, with the British government offering significant reward money for anyone who could find them. In 1852, Admiral Edward Belcher's search party on the H.M.S Resolute got stuck in the ice, but it ended up being fortuitous — they found another search party led by Robert McClure, who left on a mission years earlier and was presumed dead. In his attempts to escape the ice and find rescue, McClure accidentally ended up discovering and crossing the Northwest Passage, and when they all made it back to England, he was given a knighthood for his groundbreaking achievement.

Finally, an 1859 search party led by the Irish explorer Francis McClintock and sent by Franklin's second wife, Lady Jane Franklin, discovered a few skeletons of crew members, as well as written accounts of what happened during the expedition up to 1848. You don't need to read it for yourself to deduce that surviving freezing temperatures with a dwindling food supply and no chance of rescue likely made for a harrowing few years.

According to the diary, the ships got stuck in the ice in September 1846, and a little over a year and a half later, Sir Franklin and 23 other men had died. The men who were still alive decided that their best bet was to travel south on foot. The freezing journey proved too difficult, and the remaining men died after resorting to cannibalism. The latter gruesome claim was later supported when Canadian archaeologists stumbled upon the wreck of the Erebus in 2014 while searching for Malaysia Airlines flight MH370 in the Queen Maud Gulf and within it found human remains with knife marks on the bones.

As for the Terror, the wreckage was found in 2016, marking 168 years after it set out on its voyage to the Arctic. It was "found in pristine condition at the bottom of an Arctic bay" by a team from the charitable Arctic Research Foundation, according to The Guardian. All three masts were broken but still standing, and almost all the hatches had everything still stowed.

It's an eerie conclusion to the Arctic mystery that had been plaguing archaeologists and historians alike for years. There's still no word on whether or not the remains of a giant, angry Inuit spirit monster were found in the wreckage of either ship, but fortunately that's why we have The Terror. The 10-episode series, which premiered on March 26, promises plenty of gory thrills and chills in your future. You better buckle — and bundle — up.