American Horror Story: Freak Show has introduced us to many colorful characters, but none as twisted as Twisty. John Carroll Lynch plays this season's main villain, a psychopathic clown who has been murdering the residents of Jupiter, FL. His very presence has ignited a backlash from the clown community. He dresses up in an old, dirty clown suit, and his trademark is a skull-like mask worn over the lower half of his face, but this week, we get to see what's underneath.

For just a few moments, Twisty's face is revealed when his prisoner whacks him and his mask falls to the side. Underneath, his jaw is torn off. It's hard to describe; it looks like a relatively new wound, but blood isn't gushing out. His tongue dangles lifelessly from his mouth hole, lacking any physical support. A few gnarly teeth remain. It's a disgusting gash, but how does he get it? And why does it look like it has never healed? Creator Ryan Murphy has said that Twisty's origins will be revealed in the fourth episode, but what do you think could have happened to him?

The image is extremely disturbing, but for those who can handle it, there's a GIF of the unmasking below the picture. 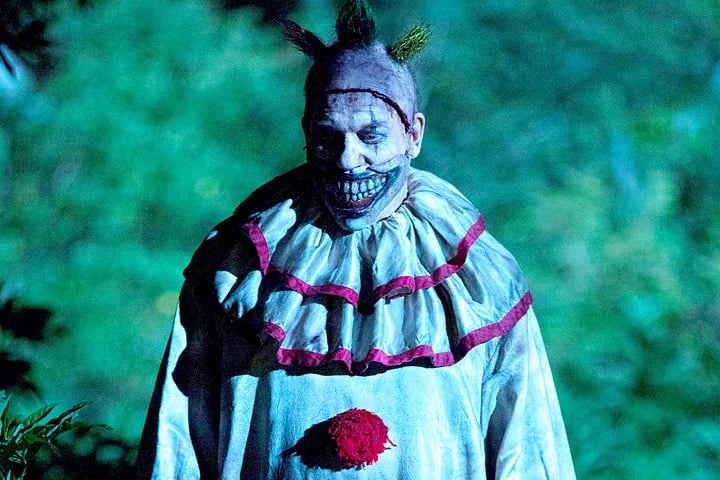 Netflix
If You Liked The Haunting of Bly Manor, Paranormal Should Be Your Next Netflix Binge
by Sydni Ellis 20 hours ago

TV
The Mandalorian: Did You Catch This Fun Cameo in the Season 2 Premiere?
by Amanda Prahl 1 hour ago