Warning: Spoilers for Captain America: Civil War are below.

All the hubbub around Captain America: Civil War is over Cap and Iron Man, who are fighting on opposite sides of an issue (and also literally fighting each other). But in the most pivotal Avengers movie, it's not just the relationship between Cap and Iron Man that's intriguing. Bucky Barnes, aka the Winter Soldier, brings about another fascinating relationship for Cap. 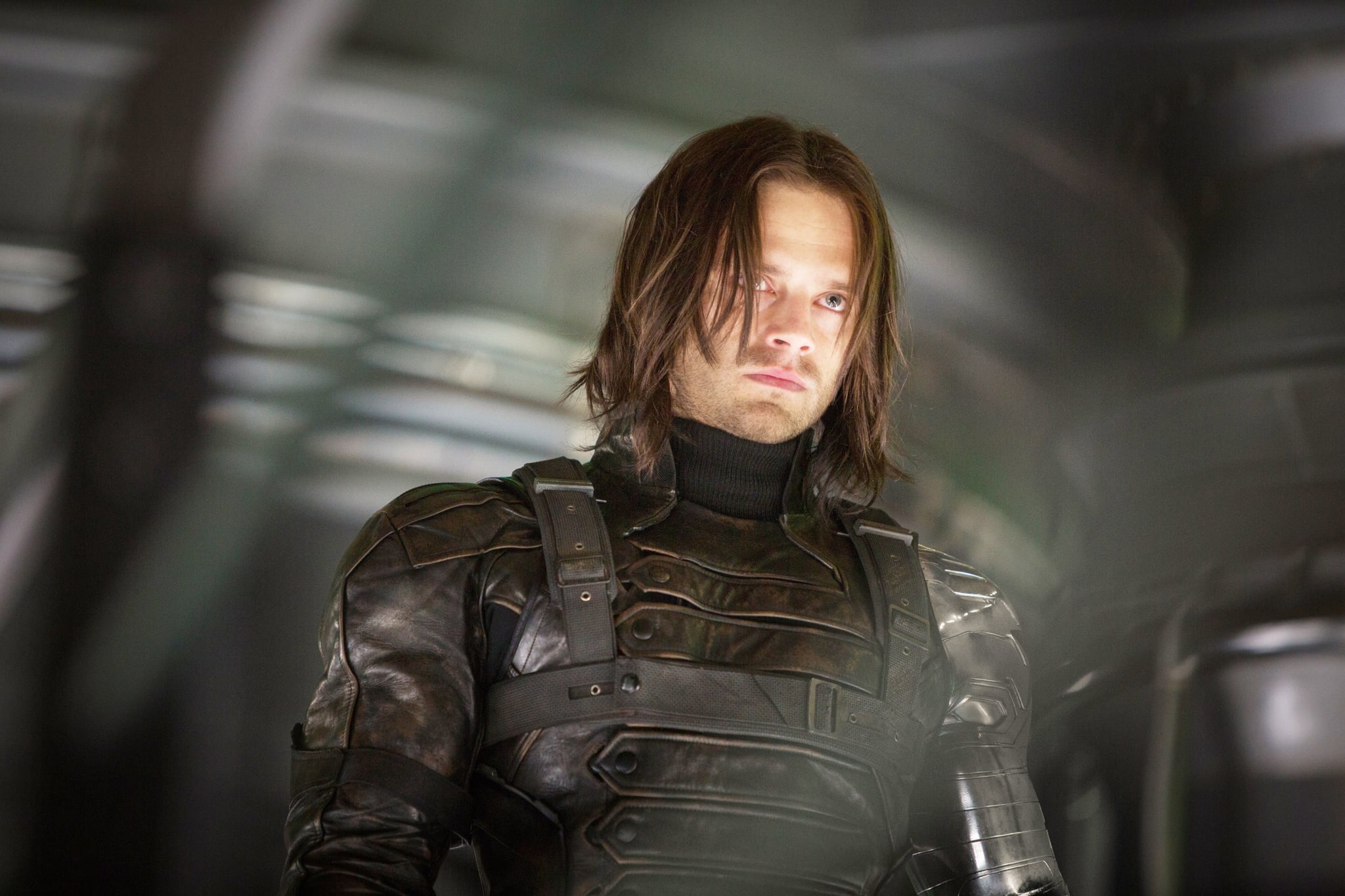 Bucky, the role Sebastian Stan has come to be best known for, is an infamous and dynamic figure in the Marvel Cinematic Universe. He starts out as the sweet, loyal best friend to Steve Rogers, then is forced to become the Winter Soldier, and in this latest installment, he becomes an ally. In fact, it's a relationship that Chris Evans has called "central" to this movie on the set last year, saying of Bucky and Cap: "This is a huge piece of his history, it's a huge piece of his struggle, not just to have someone that he can connect to on a friendship level, but just the guilt that he must have." Since Bucky is so central, let's dive a little deeper into who he is and the roller coaster life he's had.

Born James Buchanan Barnes, "Bucky" grows up with Steve Rogers in 1940s Brooklyn, and together, they enlist in the Army to fight in WWII, as we see in the first Captain America film, The First Avenger. As you know, Steve's Army entrance is a little more complicated than Bucky's, but eventually they both end up fighting alongside each other, attempting to sabotage terrorist group Hydra. In the movie's most emotional scene, Cap and Bucky are on a mission atop a train, and Bucky falls to his death, with Cap unable to save him. That scene marks the "death" of sweet Bucky Barnes and opens the door for his next chapter.

Like Cap, Bucky is thrust forward a generation, but he's manipulated so far beyond recognition that, well, Cap doesn't recognize him when he first sees him as the Winter Solider. Though we learn in the second Captain America movie what happened to Bucky, it's not until Civil War that we really understand the level of damage. Therefore, we have to talk about the events of the second and third movies concurrently to really understand it.

Here's the rough timeline: in 1944, Bucky Barnes falls off a train in action into an icy river and is believed to be dead. Still alive, he is then found by Hydra, who freezes him and replaces his left arm with a deadly prosthetic cybernetic arm. Bucky becomes the first Winter Soldier in Hydra's program of the same name. They brainwash him to forget his own memories and train him to be an assassin. Bucky is also cryogenically frozen periodically, which explains why he hasn't aged much by Civil War. In one of the periods where he's animated, however, Bucky is tasked with the greatest offense against an Avenger: he is sent to kill Howard Stark, Tony Stark's father, in 1991. In Civil War's most devastating scene, we see Bucky complete his mission, murdering both of Tony Stark's parents, a fact that makes the war between Cap and Tony personal when Cap won't allow Tony to get his revenge.

So after a series of assassinations and in between freezer time, Bucky emerges into present day, coming face to face with Cap in The Winter Soldier after being sent to kill Nick Fury. Of course, Bucky has no recognition of Cap and continues to fight for Hydra and fight Cap, until their final battle scene, when Cap refuses to fight Bucky and falls into the Potomac River. The first real flicker of his memories and Steve come back to Bucky, and he pulls Cap from the river, saving his life, then disappears.

Shortly thereafter (in the Winter Soldier's postcredits scene), Bucky goes to the Smithsonian and has his mind blown when he finds the Captain America exhibit, which includes a memorial to him. To find out what happens between that scene and the events of Civil War, we have to skip to Ant-Man, where it's revealed in that postcredits scene that Falcon and Cap have Bucky as a prisoner.

Which brings us up to date (if you've seen Civil War, anyway). After spending the film being accused of terrorist activity, the Winter Soldier completes his transformation from villain to hero when he is fighting alongside Cap yet again, in a nice little parallel to The First Avenger. He still feels vulnerable, however, and after telling Cap that he can't trust his own mind, he is cryogenically frozen again in Civil War's midcredits scene. Let's hope to see him again, by Cap's side, in Infinity War.

Movies
Exclusive: This Descendants and Zombies Mashup Is the Disney Channel Crossover of Our Dreams
by Kelsie Gibson 19 hours ago

HBO
The Scheme: The Complicated True Story of Christian Dawkins
by Amanda Prahl 1 day ago

Movies
Who's Ready For Another Wild Ride? Dwayne Johnson Confirms Hobbs and Shaw Sequel
by Monica Sisavat 2 days ago